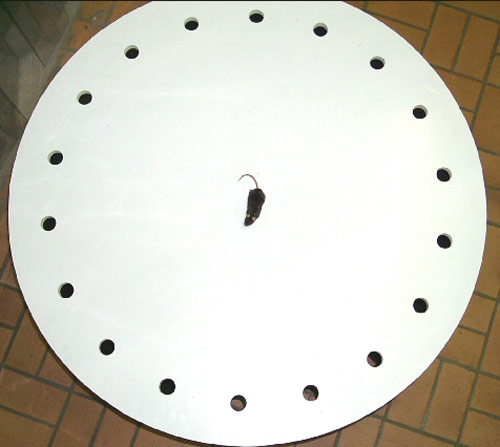 Sharp critters: Mice lacking the PRICKLE2 gene do well on memory tests such as this maze and have social deficits reminiscent of autism.

Sharp critters: Mice lacking the PRICKLE2 gene do well on memory tests such as this maze and have social deficits reminiscent of autism.

After analyzing the brains and behaviors of mutant mice and performing genetic screening on people with autism, researchers have pinpointed what they say is a new autism candidate gene: PRICKLE2. The unpublished work was presented Thursday at a poster session at the Cell Symposia: Autism Spectrum Disorders: From Mechanisms to Therapies conference in Washington, D.C, a satellite meeting of the Society for Neuroscience annual meeting.

“We think we might have a new autism gene, and we’re pretty excited about it,” says Levi Sowers, a graduate student in Alexander Bassuk‘s laboratory at the University of Iowa, who presented the poster.

In June, Japanese researchers first reported mice lacking PRICKLE2, which is involved in the development of synapses, the junctions between neurons1. Around the same time, Bassuk and a large team of collaborators found mutations in PRICKLE2 and a related gene, PRICKLE1, in people with myoclonus epilepsy, characterized by muscle twitching2.

To better understand PRICKLE2’s link to epilepsy, Bassuk’s team began testing the mutant mice for seizure activity. As in people carrying mutations in the gene, he found that the animals have significantly more seizures than controls do.

PRICKLE2 has been shown to be expressed all over the mouse brain, but especially in the hippocampus, a region important for learning and memory2. So the researchers gave the mice an array of memory tests.

In the ‘context fear conditioning’ test, mice are put into a cage for three minutes, during which they are given frequent electricalshocks to their feet. As they learn to associate the cage with the shocks, the mice crouch in fear. Even after 24 hours outside of that cage, the mice remember the trauma when they are put back in.

The PRICKLE2 mutants learn this association significantly faster than controls do. “This was really exciting to us because it suggested that our mice were smarter than other mice in a contextual learning environment,” Sowers says.

In a different version of this test, in which the foot shocks are paired with sounds, the animals learn to associate the sound, rather than their environment, with the pain. This test is not dependent on the hippocampus, but rather the amygdala, a region of the brain involved in emotion and fear processing. The PRICKLE2 mutants performed no differently than controls on this test.

On the third test, known as the Barnes maze, the mice are placed in an open space with 44 holes in the floor, one of which is an escape route. Because mice become anxious in open areas, once they find the escape hole, they tend to remember where it is. On this test, PRICKLE2 mutants spend significantly more time near the escape hole than controls, suggesting that they may be learning faster, Sowers says.

However, if the escape hole is moved to the opposite end of the cage, the PRICKLE2 mutants are much worse at learning the new route than controls are.

“When we reverse the paradigm on them, they get stuck on the first hole,” Sowers says. This lack of ‘reversal learning’ may be akin to the insistence on sameness that is often seen in people with autism, he adds.

The researchers discovered cellular abnormalities as well. The Japanese group found that PRICKLE2 directly interacts with PSD-95, one of the hundreds of proteins in the post-synaptic density (PSD), which has been linked to autism-related disorders.

Sowers found a dearth of synapses in the hippocampus and an abnormally small PSD in the PRICKLE2 mutant mice compared with controls. The mutants also have lower transmission of electrical signals than controls.

Lack of synapses is typically thought to cause cognitive impairments, so the findings are “not consistent with the increase in learning, which is really strange to us,” Sowers says.

Many features of PRICKLE2 mice overlap with mouse models of autism. Mice lacking the synaptic gene NLGN3, for example, also have enhanced spatial learning. And those with dysfunctional SHANK3, another protein needed at the synapse, have abnormally small PSDs. Using the ‘three-chamber’ social test, the researchers also showed that unlike controls, the PRICKLE2 mutants spend significantly less time inspecting a new mouse than a new object.

Finally, collaborating with Tom Wassink of the University of Iowa, the researchers sequenced PRICKLE2 in blood samples from hundreds of individuals with autism and higher-than-average IQ.

So far, they have found two families carrying PRICKLE2 mutations. In both, the father passed it down to both of his children. The researchers have not found any PRICKLE2 mutations in hundreds of control samples from independent sources.

The researchers plan to study how these mutations affect human neurons by creating induced pluripotent stem cells from skin samples taken from the affected family members.