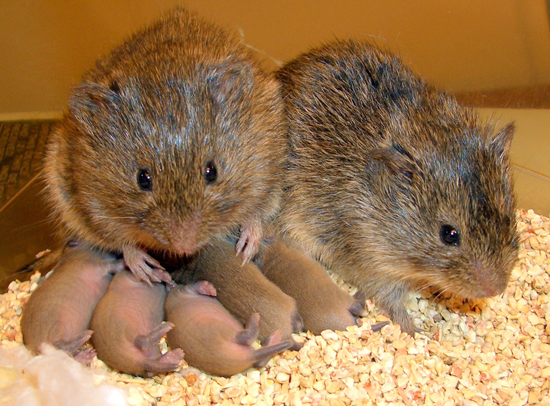 Love rules: Prairie voles, which mate for life, bond with their new mate faster after taking a drug that increases the levels of oxytocin in the brain.

A drug already in clinical trials as a tanning compound raises brain levels of oxytocin — a hormone and neurotransmitter involved in social bonding — researchers reported Sunday at the Society for Neuroscience annual meeting in San Diego. Higher levels of oxytocin can help animals recognize their mates and turn to a friend for help, according to two posters presented at the meeting.

Oxytocin has been credited with numerous roles in social behavior. Some of these are credible, such as studies that show that people trust others more after they sniff the hormone. Others are far-fetched — for example, claims that the military may be planning to use oxytocin to create calm and happy soldiers.

Several studies have looked at the effect of oxytocin on humans, but dosing people with the hormone isn’t as easy as it might sound. People must sniff up to two teaspoonfuls, and even then only a fraction of the dose gets into the brain.

“You definitely know you’re taking it,” says Paul Zak, professor of economics at Claremont graduate university, who has led several human studies with the hormone.

Larry Young, a pioneer in the field, may have solved this problem. His team has identified one compound — called melanotan II — that can travel into the brain from the bloodstream and activate receptors that produce oxytocin.

Melanotan II is already in clinical trials as a tanning agent and to cure erectile dysfunction, but to assess its effect on social behavior, the researchers turned to their favorite model: prairie voles.

Prairie voles are the basis of the first studies on oxytocin’s power. Researchers found in 1992 that only voles with high levels of oxytocin receptors in the brain form monogamous pair bonds.

In the new study, the researchers found that a melanotan II injection can shorten the time it takes for a prairie vole to remember its companion.

Prairie voles typically bond with their mates over a 24-to-48 hour period, and later prefer the mate’s company to that of all strangers. After melanotan II injection, however, eight out of nine prairie voles were ten times more likely to cuddle with a vole they’d only known for six hours than with a stranger.

What’s more, the effects of the injection lasted long after the initial dose had worn off. Prairie voles introduced to a mate for six hours, and then kept in isolation for one week, still remembered their old friend.

This is because oxytocin enhances the recognition of socially relevant information, “really making you see the individualness of the individual” — and that this can have a lasting effect, says Young, professor of psychiatry at Emory University.

This is an important consideration for oxytocin as a potential treatment for autism, Young says. For example, it could help enhance the impact of behavioral therapy, helping children learn skills “that will have a life-long effect.”

Others are more cautious.

Impaired social skills in people with autism are unlikely to be the result of an inability to recognize other people, says Jacqueline Crawley, chief of the Laboratory of Behavioral Neuroscience at the National Institute of Mental Health. Although oxytocin therapies are promising for treating aspects of social behavior, she says, they may not directly address the issues that are specific to autism.

Another prairie vole study presented at the meeting shows that, in combination with social interaction, oxytocin can lower anxiety-related behaviors in frightened animals.

Following a test that mimics flooded burrows in the wild and triggers an escape reaction, voles given both oxytocin and a companion snuggle more and struggle less to escape from dry cages than controls do. These voles also produce more oxytocin in their blood in response to the stress.

Jason Yee, a postdoctoral fellow at Sue Carter’s lab at the University of Illinois at Chicago, suggests that oxytocin could be having an effect by switching a brain pathway from stress-inducing to calming.

Yee has found that pretreatment with oxytocin decreases the association of the periventricular nucleus with corticosterone, a stress hormone, and increases its association with regions of the parasympathetic nervous system known to have a calming effect.

Yee also mentioned preliminary work showing that oxytocin lowers self-directed anxious behaviors, such as self-grooming, which is often used in mouse models as a proxy for repetitive behavior seen in autism. In this case, oxytocin alone or the presence of a companion vole is each sufficient to reduce this behavior.

Although these studies are preliminary, they suggest that targeting the oxytocin pathway could help treat social disorders such as autism.

At the new Center for Translational Social Neuroscience at Emory University, created last month and launched publicly at the meeting, Young plans to study the role of oxytocin and other compounds in regulating social behavior of voles and non-human primates. Researchers at the center will collaborate with clinicians from the Marcus Autism Center to develop treatments for children with autism and other neurological disorders, Young says.