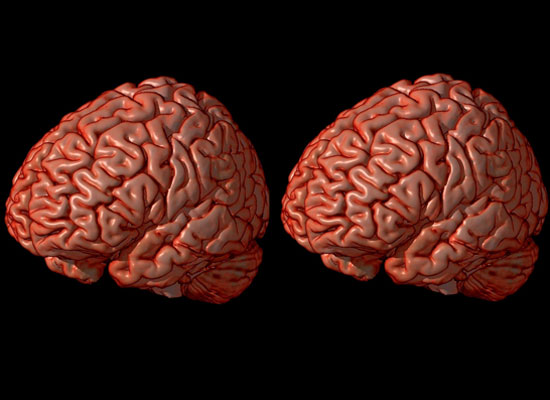 Inflamed theory: The two types of autistic brains appear to have little in common with each other except for a high level of inflammation.

The brains of people with autism show high levels of inflammation compared with controls, suggests a study of postmortem brain tissue from 11 individuals with autism, presented at a poster session Monday at the Society for Neuroscience meeting in Chicago.

The researchers studied the gene expression profiles of five brains and found two distinct types: one that preferentially expresses genes controlling immune regulation, and another expressing those related to changes at synapses, the junctions between neurons.

Intriguingly, few genes are over-expressed in both types of brains as compared with healthy controls, which may speak to the heterogeneity of the disorder, says lead investigator John Allman, professor of biology at the California Institute of Technology. “There may be several routes to autism.”

In the new work, he and collaborator Barbara Wold, professor of molecular biology at Caltech, looked for gene expression differences in the fronto-insular cortex, which is known to be involved in social cognition and self-awareness. This area is also home to von Economo neurons — large, sparingly structured cells that Allman has proposed play a role in social and emotional behaviors1.

The tissues were collected by the Brain and Tissue Bank for Developmental Disorders, and come from people with thorough medical histories who had received standard clinical diagnoses of autism.

The researchers analyzed gene expression in the four samples by sequencing and counting every string of RNA. “It’s much more robust than microarrays,” Allman notes, referring to the older method that effectively captures genes on a plate and then takes a snapshot of them.

The technique allows the researchers to measure, with statistical confidence, the quantitative difference in gene expression among several samples. Among their five samples, the researchers found two distinct groups, which they dubbed ‘Autism-A’ and ‘Autism-B’.

The genes most differentially expressed in Autism-A are all involved in regulating the immune system, particularly interleukin 6 (IL-6). These findings agree with previous studies showing that people with autism have higher levels of IL-6 in the frontal cortex2 and in the anterior cingulate cortex3, a region that has been tied to empathy and emotional behavior. Receptors for IL-6 are strongly expressed on von Economo neurons.

Autism-B brains, in contrast, highly express genes related to synapse function — specifically, those needed to help neurotransmitters dock and release their contents. Several of the genes belong to, or bind to, the neurexin family, which has been fingered in several genetic studies of people with autism4.

Allman also searched four of these samples and seven additional fixed-tissue autism brains for the presence of microglia, cells that dramatically change shape when triggered by infection or immune molecules such as IL-6. Fixed-tissue brains are preserved in formaldehyde, and are much easier to acquire than fresh tissue.

Microglia may provide a link between the two types of autism. During an infection, these cells transport bacteria or waste products into the cell body, “where it is stored like garbage in a garbage can,” Allman explains. “The activated microglia can also strip synapses off of neurons, disrupt circuitry and even eat neurons,” he adds.

Overall, the results suggest that inflammation is a common feature of all autistic brains, Allman says, but “at this point we can only guess how Autism-A and [Autism]-B relate to each other.” They could be separate illnesses that result in similar behaviors, he says, or represent different stages of the same disorder.

This study is provocative, but “obviously needs to be followed up with a larger sample,” says Gene Blatt, associate professor of anatomy and neurobiology at the Boston University School of Medicine.

It’s possible that different autism subgroups have some genes in common and some that are distinct, Blatt notes. Differences in how the genes are expressed as proteins “may also determine when in development abnormalities would occur.”