Point mutation in neuroligin found in brothers with autism 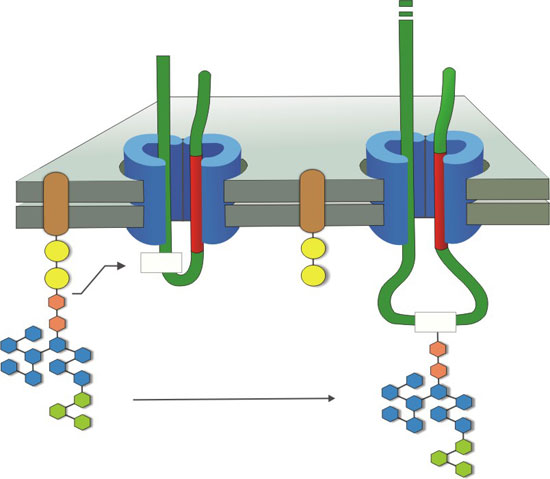 Bitter sweet: Mutations in enzymes that add sugar molecules to proteins, a process called glycosylation, may contribute to autism.

A new mutation in the neuroligin-4 (NLGN4) gene, one of the few genes convincingly tied to autism, has been found in two brothers with autism, further implicating the gene in the disorder, scientists reported 2 September in the Journal of Neuroscience1.

The mutation changes a single base in the gene, resulting in a single amino acid substitution in a region important for folding the NLGN4 protein. This effectively inactivates the protein by preventing it from taking its place on the cell surface, where it is required.

The finding addresses the question of just how significant the NLGN4 mutations are.

“Are they causative or are they just bystanders?” asks lead investigator Thomas Südhof, professor of molecular and cellular physiology at Stanford University.

Previously reported NLGN4 mutations in people with autism are either drastic deletions or signals that stop translation, leading to outright loss of the protein2. This so-called ‘loss of function’ is considered strong evidence for a causal role in autism.

The new findings show that even a subtle point mutation can abolish the protein’s function, says Nils Brose, director of the Max Planck Institute for Experimental Medicine in Göttingen, Germany, who developed a mouse model of autism based on the loss of NLGN43. “In that regard the paper is very important,” he says.

NLGN4 mutations are rare, but they have been a focus of autism research because of their ability to alter synapses, the connections between neurons4. The NLGN4 protein is part of a network of molecules at the synapse that regulate how signals are passed between neurons.

One gene, many outcomes:

NLGN4 is located on the X chromosome. The new mutation is present only in the boys, and not in their parents, indicating that it spontaneously arose in the mother’s egg cells. It is also absent from 300 healthy people, making a strong statistical case for its role in causing autism.

In cultured cells, the mutant protein becomes trapped in the endoplasmic reticulum, the cell’s protein factory, instead of getting exported to the cell surface, the researchers found. Excitatory synapses, which promote electrical activity between neurons, are also impaired.

“From a genetic point of view, the finding is not surprising,” Brose says. “What is really fantastic about this paper is the comprehensive analysis going from genetics to biochemistry to cell biology to electrophysiology.”

The new mutation is likely to have caused the boys’ autism, but it is not necessarily a foregone conclusion: For example, a paper last year reported that of three family members carrying identical deletions within NLGN4, one has autism, one has Tourette’s syndrome and attention deficit hyperactivity disorder, and one has severe anxiety5.

Jonathan Picker, a clinical geneticist at Children’s Hospital Boston who led that study, doesn’t see these different outcomes as contradicting the connection between autism and NLGN4. The differences may stem from how well the synapses in each person can compensate for the loss of NLGN4, he says.

NLGN4 interacts with numerous other proteins at the synapse, and a perturbation to any of them may significantly alter synapse function, and cause autism. This kind of gene network can explain why any one mutation leading to autism is rare.

”Although [mutations in] NLGN4 are a rare cause of autism, they can provide an anchor for us to start finding the other molecules that work with them,” Picker says. “Now what we have to do is really connect all these molecules together.”

The new paper illustrates the importance of getting a protein to its proper place in a cell, and the interim steps that can go awry. Mutant NLGN4 protein remains in an immature form, sporting large sugar chains that are normally trimmed away, and is rapidly degraded.

Researchers are exploring whether enzymes that add sugar molecules to proteins, a process called glycosylation, contribute to autism. Mutations in the genes that code for the enzymes are known to cause other brain disorders, such as Walker-Warburg syndrome.

“Glycosylation is very important for giving proteins their eventual shape and appearance,” says Peter Burbach, professor of neuroscience and pharmacology at the University Medical Center Utrecht in the Netherlands. “The sugar molecules are so large, they are more like a whole sugar tree.”

In May, Burbach and his colleagues reported that a handful of mutations in enzymes involved in glycosylation are found in people with autism6.

The scientists surveyed 105 people with autism and 267 healthy people for deletions or duplications of segments of DNA — known as copy number variations (CNVs). Of the hundreds of genes within CNVs unique to the autism group, seven code for enzymes involved in glycosylation.

Like NLGN4 mutations, these aberrations are rare, and each occurs in only one person with autism in the study. The low frequency makes it difficult to argue that any given mutation causes the disorder. “The problem in the genetics of autism is that basically every patient has a different, or private, mutation,” Burbach says.

His team used a bioinformatics tool that estimates the likelihood that a particular gene is related to a disease, based on information about the gene’s expression patterns, the cellular pathways it participates in, and information from published literature.

All seven glycosylation genes came up as highly likely to be related to autism, but Burbach is cautious about their importance.

“Glycosylation is only one small part of the puzzle,” he says. “It’s only one of the many points where things can go wrong at the synapse.”

Given the complicated machinery that assembles a synapse and makes it work, any number of mutations at any point of the assembly may result in autism, Burbach says. The biological approach taken by Südhof’s team can help make sense of the morass of mutations found in autism, he says.

“What I like very much about the paper is that it makes a biological argument that the genetic defect in this case is really a functional defect,” Burbach says. “It should be done much more in this field.”