Plethora of protein-making machines in neurons may underlie fragile X 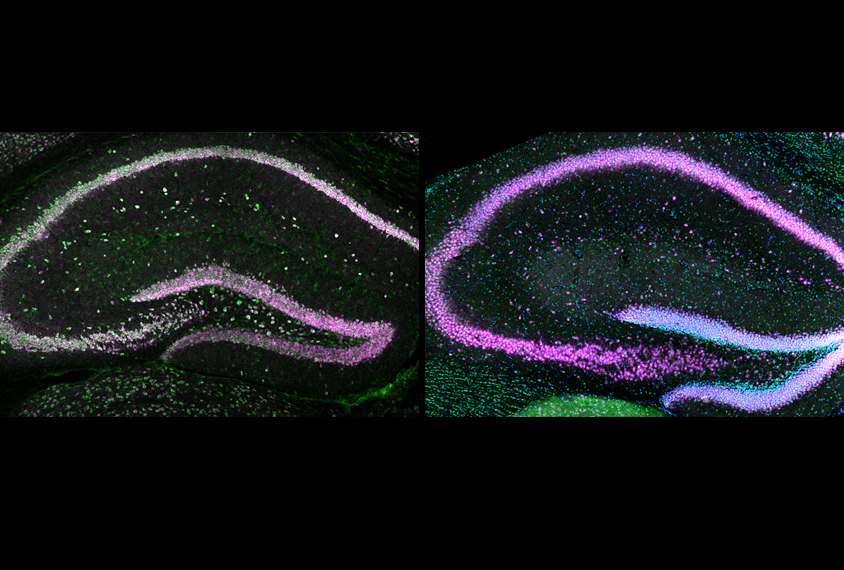 Protein packed: Neurons (pink, blue) in brain slices from mice lacking FMR1 have large nucleoli (green, left), a part of the cell that increases in size when ribosomes are being produced, and a heightened expression of ribosomal RNA (green, right), a component of ribosomes.

An overabundance of ribosomes in neurons drives an imbalance of proteins produced from long and short genetic transcripts in a mouse model of fragile X syndrome, according to a new study. The findings provide a novel way of conceptualizing the condition’s biology and may offer avenues for developing treatments.

Fragile X syndrome is a common inherited cause of intellectual disability and autism. The condition often stems from mutations that silence the gene FMR1, causing a loss of the protein it encodes, FMRP.

A long-held theory suggests that FMRP represses the translation of mRNAs into proteins. The loss of FMRP therefore leads to a buildup of proteins that is thought to disrupt neuronal functions, such as synaptic plasticity — the process by which neurons alter the strength of their connections. But it’s unclear why a buildup of proteins would cause neurons to malfunction, partly because researchers have yet to comprehensively catalog proteins that are overproduced when FMRP is lacking.

In the new study, researchers found that protein subunits of ribosomes are chief among the proteins overproduced in the brains of mice missing FMR1, suggesting an excess of these protein-making machines. The overabundance of ribosomes has knock-on effects: It shifts the balance of the proteins that ribosomes synthesize from long and short mRNAs, leading to a dearth of proteins important for synaptic function, which are often encoded by long transcripts, the researchers reported in June in Nature Communications.

Overall, the findings provide an update on the theory that protein production runs amok in fragile X. “It’s not too much protein synthesis; it is unbalanced protein synthesis,” says Emily Osterweil, professor of molecular neuroscience at the University of Edinburgh in Scotland, who led the new work.

The research presents a needed shift in the field, says Peng Jin, professor of human genetics at Emory University in Atlanta, Georgia, who was not involved in the work. Most studies on FMRP have looked at the protein’s binding targets or changes in protein expression associated with a subset of mRNAs. “To really move the field forward, we need to look at the genome-wide translational profile,” he says.

Osterweil and her colleagues cataloged 52 proteins that show significantly altered expression in synapse-enriched regions of slices of the hippocampus, a brain region involved in learning and memory, from FMR1 mice compared with wildtype mice.

The team then compared these protein levels with data from a previous study in which they had documented differences in the mRNAs being translated in a type of hippocampal neuron from both sets of mice.

The most upregulated mRNAs and proteins are those related to ribosomes, the researchers found by examining groups of genes that share common biological features in both datasets. The expression of components that make up ribosomes — including protein subunits and strands of ribosomal RNA — is also heightened in neurons from FMR1 mice, the researchers noticed. This suggests that ribosomes are overproduced.

Ribosomes typically translate short mRNAs faster than long ones, studies have shown, so an increase in the abundance of ribosomes is thought to shift the balance of the proteins they synthesize. In support of this idea, Osterweil’s team found that under-translated mRNAs in neurons from FMR1 mice are longer than average, whereas over-translated mRNAs are shorter than average. Patterns of protein expression follow a similar trend, with under-expressed proteins being enriched for those encoded by long mRNAs.

Long mRNAs with reduced levels of translation disproportionately encode proteins involved in synaptic structure and function, an analysis of their biological function showed. Transcripts of genes associated with autism in a database called SFARI Gene are also under-translated in neurons from FMR1 mice, as are FMRP’s mRNA binding targets. (SFARI Gene is funded by the Simons Foundation, Spectrum’s parent organization.)

Typically, activating receptors called mGluRs, found on the surface of neurons, induces a form of synaptic plasticity known as long-term depression, a temporary weakening of connections between neurons. In mouse models of fragile X, this response is exaggerated, studies have shown.

When Osterweil and her colleagues exposed neurons from wildtype mice to a compound that stimulates mGluRs, they noticed an increase in the production of ribosome subunits and a reduction in the translation of long mRNAs, similar to the changes seen in unstimulated neurons from FMR1 mice. Blocking ribosome production after stimulation inhibits the shift in translation from long to short mRNAs and impairs long-term depression in wildtype neurons, the researchers found, suggesting that these processes play an important role in synaptic plasticity.

Stimulating mGluR receptors in brain slices from FMR1 mice evoked minimal changes in translation, however. These results could explain why long-term depression is exaggerated in fragile X, Osterweil says. Neurons are already in a state associated with synaptic weakening.

Although prevailing evidence points to FMRP’s role in repressing translation, the new findings jibe with previous studies that suggest FMRP is involved in activating the translation of large proteins encoded by long mRNAs, says Ethan Greenblatt, assistant professor of biochemistry and molecular biology at the University of British Columbia in Canada, who was not involved in the new work. In 2018, Greenblatt and a colleague found that the loss of FMRP reduces the translation of particularly large proteins. Further investigating the pathway by which FMRP regulates the production of these proteins might provide a fresh angle for thinking about therapies for fragile X, he says. “The root cause of it actually might not be that complex.”

Research also suggests that ribosomal protein production is altered in some mouse models of autism, Jin says, hinting at a common mechanism that might underlie various forms of the condition. Modulating ribosomal protein synthesis might provide an avenue for treating fragile X and potentially autism, but more research is needed to understand FMRP’s role in cells, he says. It’s still unclear how a loss of FMRP would lead to excess ribosomes.

Osterweil also points out that she and her colleagues have yet to show that normalizing ribosome production can correct disrupted synaptic plasticity. Modulating ribosome synthesis is also tricky, as the organelle has critical cellular functions, she says. “It is not something that one can disrupt without causing very big consequences.” She and her colleagues are now working to reduce ribosome synthesis in a way that is not overly damaging to cells.