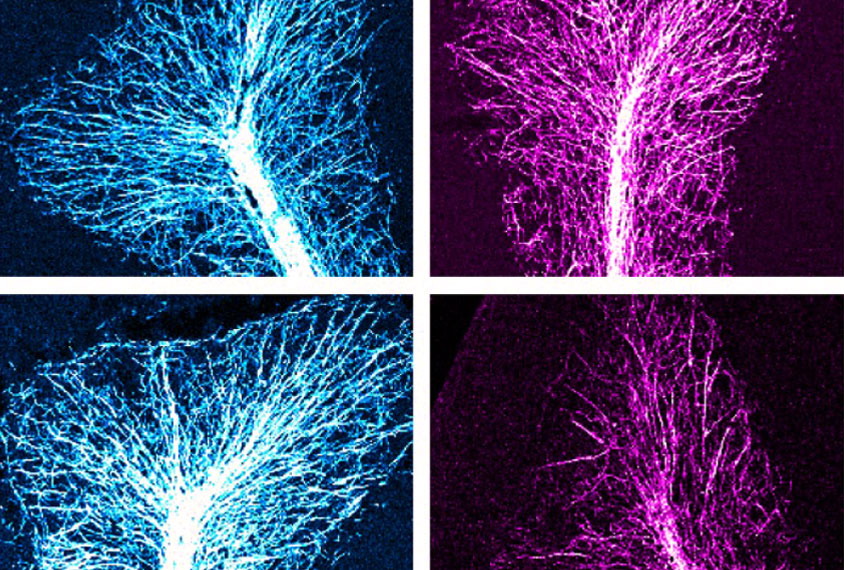 My oh myelin: In a new mouse model of autism, the male animals have unusually thick myelin in the cerebellum, which correlates with more intense autism-like traits.

Male mice exposed to atypically low levels of a placental hormone in the womb have altered brain development and asocial behaviors, according to a new study. The findings may help explain why preterm birth — which coincides with a deficiency in hormones made by the placenta — is linked to an increased likelihood of having autism.

The hormone, called allopregnanolone, crosses the blood-brain barrier, binds to receptors for the chemical messenger gamma-aminobutyric acid (GABA) and helps regulate aspects of neurodevelopment, including the growth of new neurons. Its levels typically peak in the fetus during the second half of gestation.

In the new study, researchers engineered a mouse model to have low fetal levels of allopregnanolone, mimicking the hormone’s loss due to preterm birth or placental dysfunction. The male mice in particular have structural changes in the cerebellum, a brain region known for balance and motor control, and exhibit more pronounced autism-like traits than control mice or female model mice.

The new model “has a good translational potential for understanding the underlying mechanisms of sex differences in neurodevelopmental conditions such as autism,” says Amanda Kentner, professor of psychology at the Massachusetts College of Pharmacy and Health Sciences in Boston, who was not involved in the work.

Injecting a pregnant mouse with allopregnanolone partway through gestation decreased the likelihood that its offspring would have autism-like traits, the researchers found.

Though preliminary, the result points to a potential treatment for babies with low levels of the hormone, says study investigator Anna Penn, professor of pediatrics at Columbia University.

Penn and her colleagues created the hormone deficiency in only some mice in a litter, deleting the gene that synthesizes allopregnanolone from fetal cells that develop into the placenta.

“This model allowed for both model and wildtype animals to be carried and raised by the same mother mouse,” Kentner says. “Except for the presence or absence of the gene, the fetal and postnatal environments would presumably be otherwise identical.”

Animals that lacked the gene ended up with less allopregnanolone in the brain, the researchers confirmed. They also had atypical gene expression throughout the brain, RNA sequencing revealed — with the highest number of differentially expressed genes in the male animals’ cerebella. Many of those genes are involved in myelination, the process of insulating axon fibers in a sheath that improves signal conductance between neurons.

“This we cannot explain today,” says study investigator Claire-Marie Vacher, assistant professor of pediatrics at Columbia University. In a separate dataset, she and her colleagues saw similar patterns of increased myelination and increased production of oligodendrocytes in preterm baby boys — hinting that the same mechanisms are at play.

Because the cerebellum is essential for coordinating movement, the researchers next tested the model animals’ motor function, using a rotating rod.

The male model mice kept their balance on the rod longer than control mice did, the team found. Several other autism mouse models also perform surprisingly well on this test.

When Penn and her colleagues evaluated the animals’ behaviors, they found that many of the male model mice showed autism-like traits, including repetitive behaviors and a preference for objects over other mice.

Male model mice also made fewer ultrasonic vocalizations than females and controls. That trait could point to atypical communication but may have also shaped the amount of parental care that the model mice received, further impacting their developmental trajectory and potentially confounding the results, Kentner says.

The model mice scored higher than controls did on a compound measure of trait severity, the team found, and those with the greatest increase in white matter had the highest severity scores.

“It gives you a great deal of confidence that [the structural changes to the cerebellum] aren’t some odd aberration,” but are playing a primary role in the observed autism-like traits, says Emanuel DiCicco-Bloom, professor of neuroscience and cell biology, and of pediatrics, at Rutgers University in Piscataway, New Jersey. DiCicco-Bloom was not involved in the study.

Female model mice seem to have atypical brain development in the cortex, as well as different behavioral changes from those seen in the males — data that the researchers plan to publish soon, Penn says.

“It points to there actually being regional changes that produce the [sex] differences. And that may point to different types of interventions that would be helpful, in terms of targeting behavioral therapies and teaching, as well as what kind of early and preventative therapies might work in boys versus girls,” Penn says.

It also means that “we probably need to redefine autism in girls,” Vacher says. She and her colleagues were able to identify autism-like behaviors in the male model mice because they specifically looked for them, she says, but female-specific traits may go unnoticed until they are better defined.

A previous version of this article incorrectly quoted Emanuel DiCicco-Bloom.