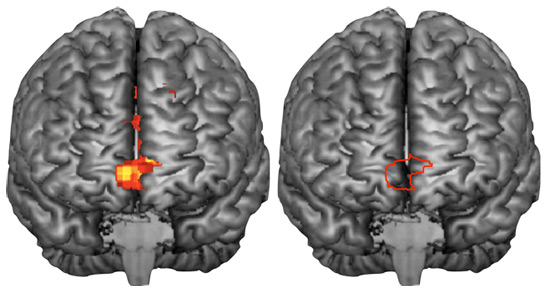 In 1943, psychiatrist Leo Kanner described 11 children who preferred to be alone and ignored people around them. Some of the children didn’t respond to direct questions, others used the pronouns ‘you’ or ‘he’ instead of ‘I’. Kanner called the children ‘autistic’, from the Greek word ‘autos’, or self.

A team of cognitive scientists at University of Cambridge has uncovered a brain signature of this abnormal self–representation in people with autism. Using functional magnetic resonance imaging, the team found that when thinking about themselves, adults with autism have lower activity in two specific brain regions important for decision-making and social interactions than do healthy controls.

What’s more, individuals with autism have weaker connections between one of these areas, the ventromedial prefrontal cortex (vMPFC), and regions harboring mirror neurons, cells that fire either when a person performs or observes a given action. The report — only the second imaging study to address the concept of ‘self’ in people with autism — was published in the February issue of Brain1.

“On the face of it, it looks as if [people with autism] are not attending to the key difference between themselves and others,” notes lead investigator Simon Baron-Cohen, professor of developmental psychopathology at University of Cambridge. “The results of this study may provide one more piece of the puzzle in helping to explain the core impairments in social understanding and communication that characterize autism.”

For decades, psychologists have brooded over the autistic self. As Kanner first pointed out, people with the disorder can seem highly self-absorbed, lost in their own world. Their conversations with others tend to be one-sided, focused entirely on topics that interest them.

Yet some experiments suggest that people with autism have an abnormally low self-interest. For example, studies of the younger siblings of children with autism have shown that those who go on to develop the disorder don’t respond to their own name at 12 months old — even if they have normal language abilities2. Similarly, unlike typical children, those with autism don’t preferentially remember words associated with themselves3,4.

Hoping to find a neural explanation, the researchers scanned the brains of 29 men with high-functioning autism and 33 healthy controls while they answered a series of questions about their own preferences and those of Queen Elizabeth. For instance, the researchers asked, ‘How likely is the Queen to think that keeping a diary is important?’

In the healthy controls, two regions lit up more when participants thought about their own thoughts than when they thought of the Queen’s: the vMPFC — part of the frontal lobe known to be involved in decision-making — and the middle cingulate cortex (MCC), which sits deeper in the brain and is active during social interactions.

In contrast, in men with autism, the vMPFC responded equally when participants thought about themselves and about the Queen; and the MCC was more active when thinking about the Queen.

Dampened vMPFC activity during self-thought in autism is somewhat predictable, notes Antonia Hamilton, a lecturer in psychology at University of Nottingham who was not involved in the work. That’s because many studies have shown that the region is important for ‘theory of mind‘, the ability to infer what someone else is thinking, which is drastically impaired in people with autism.

However, lower activity of the MCC in autistic participants is more surprising, she says. “No one’s paid very much attention to this region in social cognition,” she notes, although it seems to be cropping up as significant in the latest research.

Scientists fingered the MCC in the first imaging study of the self in autism, published in Neuron in 20085. In that work, researchers from Baylor College of Medicine in Houston, Texas, scanned people with autism while they played a complex trust game with another person. Compared with healthy controls, participants with autism show a marked decrease in MCC activity when deliberating their own decisions, the researchers found.

Hamilton has other preliminary data suggesting that the MCC is involved in thinking about others. She has found MCC activation in healthy adults when they watch people picking up an object, but not when they watch the same object moving on its own. Adults with autism, in contrast, have no MCC activity during the task, she says.

Bolstering the idea that a misrepresentation of self can cause social problems, the new study also links the magnitude of abnormal brain activation with the severity of the participants’ social impairments.

Participants with autism who show the greatest difference in vMPFC activity between ‘self’ questions and ‘Queen’ questions — that is, those whose brain activity looks most like the control group’s — were less socially impaired as children than those whose brains show little distinction between self and other.

“The most intriguing finding is that there’s this correlation with the clinical condition,” says Marco Iacoboni, who was not involved in the new study.

If the association is verified in a larger sample, clinicians could use it as a biomarker of autism, suggests Iacoboni, professor of psychiatry and biobehavioral sciences at University of California, Los Angeles.

“It’s useful because if you have a very reliable parameter that tells you a lot about the condition of this particular individual, then in principle, you could use it for evaluating interventions, evaluating treatments, and so on,” he says.

The new study also analyzed how the vMPFC talks to other brain regions when thinking about the self.

The researchers found that participants with autism have weaker connections between the vMPFC and two cortical regions in the parietal lobe: the ventral premotor cortex and the somatosensory cortex. These regions are activated when an individual takes action, and are thought to contain mirror neurons.

Iacoboni and colleagues in 2006 first suggested that the mirror neuron system is disrupted in autism6, preventing children with the disorder from imitating other people and developing normal social relationships.

The new study supports this idea, Iacoboni says. “It’s another example of these two systems, one on the external side of the brain and one on the internal side, that are talking to each other. They are probably both very important to understanding the conditions in which social cognition becomes problematic, like autism.”

Other experts agree, noting that these frail connections could underlie the lack of eye contact or gestures in people with autism.

“A very common symptom in autism, for example, would be a lack of facial expression. If you smile, they don’t automatically smile back,” notes Justin Williams, a senior lecturer in child and adolescent psychiatry at University of Aberdeen in Scotland. “Thinking about people’s thoughts is based in the parts of brain that enact those thoughts. But in autism, that connection is not there.”

It would be interesting to investigate whether this abnormal brain signature changes in the presence of certain brain chemicals, such as serotonin, Williams says. “If we can find out how we can manipulate such a difference, then we might have an important direction for treatment.”