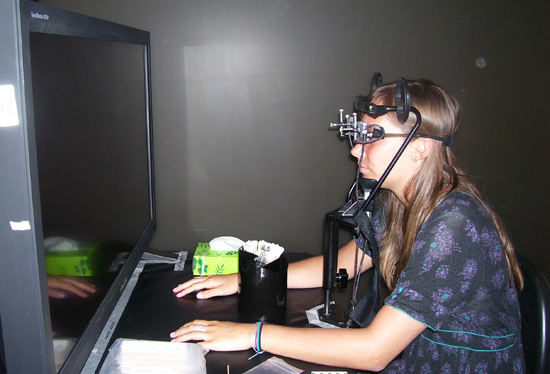 Eye opening: Close family members of people with autism are less accurate when shifting their gaze from one object to another.

Parents and siblings of people with autism have abnormal eye movements and score higher on tests evaluating traits associated with the disorder.

In particular, relatives of people with autism are less accurate at tracking slow-moving objects and quickly shifting their gaze from one object to another than are relatives of healthy individuals, according to a study published in the August Archives of General Psychiatry1.

The findings are the latest in a series of studies that pick out subtle traits associated with autism in healthy first-degree relatives of people with the disorder.

“These findings are really exciting to us because they suggest that we may be able to use these specific neurophysiological measures to pry apart subgroups of people with autism,” says lead investigator John Sweeney, director of the Center for Cognitive Medicine at the University of Illinois at Chicago.

Studies on healthy family members have found that they share autism-related traits ranging from large head size to higher blood levels of serotonin, a chemical that affects mood, sleep and memory.

Relatives who have milder versions of autism symptoms, such as social functioning and language and communication deficits, are referred to as having ‘broad autism phenotype,’ or BAP.

In the past decade, surveys have been used to identify and characterize BAP in detail2,3. A study published in June by British researchers validates a 2001 questionnaire used to identify BAP parents and suggests that some parents are much closer to the autism spectrum than was suspected, scoring high on the list of autism-related traits4.

In 2004, Sweeney’s team showed that, compared with healthy children, those with high-functioning autism have abnormal eye movements5. In the new study, the researchers administered a battery of eye-movement tests to 57 parents and siblings of people with autism, and 40 healthy people matched for age and gender.

Compared with controls, relatives of people with autism are less accurate at rapidly shifting their gaze from one object to another, the researchers found. This type of eye movement, called saccades, allows people to read words on a page or quickly scan their surroundings.

Saccades are controlled by specific brain circuits, including the fibers that run from the pons — an area that regulates basic body functions including breathing and eye movement — to the cerebellum, a region crucial for motor control.

Researchers can look at brain images or genes involved in neural signaling within those areas. Sweeney’s group is analyzing specific genes in relatives with the abnormalities, and expects to have results in a few months.

Neurologists often analyze eye movements to test the functionality of brain circuits, and to help diagnose diseases such as multiple sclerosis and Parkinson’s. But it’s too early to judge whether the Sweeney group’s results will lead to a biological indicator, or biomarker, of autism, researchers say.

“A biomarker has to be able to predict [autism] and without that being done, I would be cautious,” says Bhismadev Chakrabarti, lecturer in neuroscience at University of Reading in the U.K., who was not involved with the work.

It may also not be possible to use these tests to screen for autism or to define subgroups of people with the disorder. For example, the tests are too difficult for young children or people with low-functioning autism, notes Ralph Adolphs, professor of psychology and neuroscience at the California Institute of Technology.

There are at least four tools scientists use to pinpoint and measure autistic traits in family members, including the 2001 questionnaire, which is called the Autism Spectrum Quotient.

In the June study, published in Molecular Autism, Simon Baron-Cohen and his team asked 2,000 parents of children on the autism spectrum and 1,007 parents of healthy children to fill out the questionnaire. As expected, parents of the diagnosed children scored higher, meaning they have greater numbers of traits associated with autism than do controls.

Baron-Cohen’s group also found that 23 percent of mothers and 33 percent of fathers of children with autism spectrum disorders meet or exceed the BAP cut-off. These parents can be grouped into two new categories — the medium or the narrow phenotype, the latter of which is closest to autism — the researchers say.

“Whether the new distinctions of medium and narrow autism phenotypes will prove useful remains to be seen,” says Baron-Cohen, professor of developmental psychopathology at the University of Cambridge in the U.K., who developed the questionnaire.

Last year, in a study of people with either autistic traits or Asperger syndrome, Baron-Cohen’s group showed that scores on the questionnaire are linked to variants in 19 genes7. That suggests the questionnaire is measuring something real, he says. The more quantitative the trait, such as eye movement abnormalities, the more readily it can be linked to genetic and brain imaging data.

Still, researchers should compare results from the Autism Spectrum Quotient with those from other questionnaires used to identify BAP, notes Molly Losh, assistant professor in communication sciences and disorders at Northwestern University in Evanston, Illinois.

“It would be very useful to know how well these instruments converge,” she says. “With large scale data-sharing efforts underway, I think this is going to be a critical issue.”

Adding the new categories for family members may make it easier to create homogenous groups for genetic analysis. On the other hand, it contradicts the idea that the number and severity of autistic traits exist on a continuum, rather than in clear-cut subgroups within the autism spectrum, researchers say.

“The truth is that there’s a continuous underlying distribution, and I think that’s ultimately what we’re going to link genetic information to,” Adolphs says.

Scientists should also study relatives of people with other psychiatric disorders, Adolphs adds. “Now the question is, ‘What if I take the parents of kids with schizophrenia? Are those abnormal as well?’ We don’t know.”