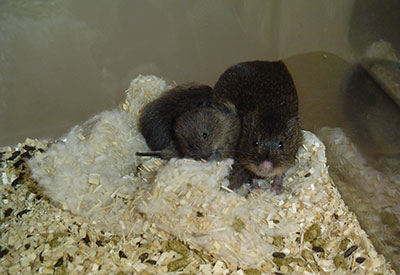 Long-term treatment with oxytocin impairs prairie voles’ ability to produce the hormone on their own, according to unpublished results presented Monday at the 2013 Society for Neuroscience annual meeting in San Diego.

Oxytocin is a hormone that enhances feelings of trust and empathy — and even love. Some studies have suggested that sniffing oxytocin can improve social behavior in individuals with autism, leading to a surge of interest in the molecule as a treatment for the disorder.

The new results raise caution that long-term treatment with the hormone may be harmful.

The researchers administered oxytocin daily into the noses of male prairie voles from age 21 to 42 days. The voles received either a low or a medium dose of the hormone, with the medium dose comparable to what is being used in human clinical trials.

Prairie voles are of interest for studying social behavior because they form strong pair bonds — in fact, they are among the few mammal species that are monogamous.

Last year, Karen Bales and her colleagues reported that male prairie voles that receive this long-term oxytocin treatment at low or medium doses as adolescents are less able to form pair bonds with their mates as adults.

The new study uncovers biological mechanisms that may underlie this finding.

“Both of these doses are causing the brain to make less of its own oxytocin,” says Bales, professor of psychology at the University of California, Davis. “But the mechanisms behind them are very different.”

Although vasopressin’s main function is to regulate water retention in the body, it is structurally similar to oxytocin and also influences social behavior. “These two hormones interact really closely,” says Bales.

The study suggests that a properly functioning oxytocin-vasopressin system is a delicate balance. “It just looks to me like that early-life oxytocin turns down the signal on things that you need later,” says Alexander Ophir, assistant professor of psychology at Cornell University, who was not involved with the work.

The results highlight the need for dose-response studies with oxytocin, which are rare, Bales says. The involvement of vasopressin also argues for caution about the possibility of treating autism with this hormone, which has begun to receive some interest among clinicians and parents of children with autism.

Bales says she plans to conduct similar studies of oxytocin treatment in BTBR mice, an inbred strain that shows social deficits reminiscent of autism, as well as in non-human primates.

In addition, she notes, some individual prairie voles are naturally more social than others. So another possibility to more closely model the effects of oxytocin treatment in autism would be to administer the hormone to a group of less social voles.

“We’re trying to come at it from as many different directions as we can,” Bales says.