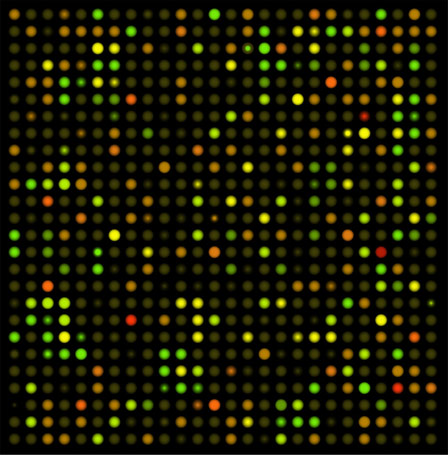 Color code: Some genes expressed differently in individuals with autism than in controls overlap with autism-linked chromosomal regions.

Color code: Some genes expressed differently in individuals with autism than in controls overlap with autism-linked chromosomal regions.

Individuals with autism have distinct patterns of gene expression in neurological pathways compared with their unaffected siblings, according to unpublished work presented Saturday at the 2011 Society for Neuroscience annual meeting in Washington, D.C.

Numerous studies have identified autism-associated mutations and copy number variations (CNVs), which are duplications or deletions of genetic information. “But very little has been studied about the function of those CNVs,” says Rui Luo, a graduate student in Daniel Geschwind‘s laboratory at the University of California, Los Angeles, who presented the poster.

Deletions or duplications of a chromosomal segment don’t necessarily affect the expression of the genes within the region. But exploring this question remains a challenge, primarily because of limited access to brain tissue. An alternative is to look at lymphoblasts or blood cells, but gene expression in the blood may not reflect the full picture in neurons.

Geschwind’s team investigated gene expression patterns in blood cells by looking at 439 siblings from families in the Simons Simplex Collection (SSC), a database of genetic and clinical information from families that have one child with autism and unaffected parents and siblings, funded by SFARI.org’s parent organization.

The researchers saw no significant overall differences in the expression of individual genes between siblings who have autism and those who don’t, says Luo. However, they noted several ‘outlier’ genes that are expressed differently in any given individual compared with the average expression across all 439 siblings.

Individuals with autism and their unaffected siblings have the same number overall of these outlier genes. But the pathways the genes are involved in differ greatly between the two groups, says Luo.

Outlier genes in siblings with autism, but not in healthy siblings, primarily affect neurological pathways, including those involved in the generation of new neurons, and the formation of synapses, the junctions between neurons, the study found.

The researchers then turned their attention to CNVs in individuals from the SSC. Those data were published in Neuron in June1.

Outlier genes present only in individuals with autism are more likely to overlap with rare, spontaneous CNVs associated with the disorder than with inherited CNVs, the researchers found.

The CNVs that overlap with multiple outliers include those linked to autism, including deletions and duplications in 16p11.2 and 7q11.23. The researchers also identified new candidate CNVs, such as deletions of 3q27, 3p13 and 3p26, and duplications of 2p15 and 3q14.

The researchers compared gene expression differences with head circumference in seven individuals with the 16p11.2 deletion and six with the duplication. Deletion of 16p11.2 is known to be associated with a larger-than-normal head size, whereas duplication has been linked with the opposite.

“The results are important because they show that gene expression from lymphoblast lines can give information about genetic forms of [autism],” Luo says. However, this approach might not reveal the whole picture. Of about 28 genes within the 16p11.2 region, only 18 are expressed in lymphoblasts.