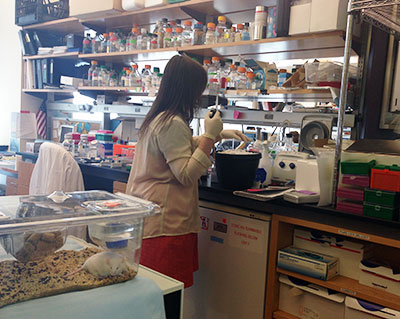 Mouse house: Things are back to normal — almost — at Gordon Fishell’s lab, which lost nearly all of its mice to Hurricane Sandy.

Walking through Gordon Fishell’s lab now, you would never know that much of his research was swept away by Hurricane Sandy, almost exactly a year ago.

The lab’s staff is back at work, studying — among other things — the role of certain neurons in disorders such as autism. With gleaming floors under glowing lights, the space resembles nothing of the dark, dank disaster zone it was back then.

“It’s really hard to remember how bad it was,” says Fishell, director of the Smilow Neuroscience Program at New York University (NYU). Until, that is, he begins to recall the damage.

At NYU’s Langone Medical Center, which sits right next to the East River, the staff successfully evacuated 322 patients, including 20 babies from the neonatal intensive care unit. But mice and machines did not fare as well.

Water poured into the basement, destroying the mouse facility and the magnetic resonance imaging (MRI) scanners stored there. Most of the 7,500 mice, including about 2,500 of Fishell’s, died. The fuel pumps for the backup generators were submerged and leaking, pitching the buildings into darkness and infusing the air with noxious diesel fumes.

The recovery since then has been unceasing, but uneven.

Fishell’s lab is shinier than some others. At Jane Skok’s lab elsewhere in the medical center, the ‘equipment room’ still holds ladders, paint buckets and power cables. The ceiling outside her lab has been lowered several feet to run visible pipes, creating what she calls an “Alice in Wonderland situation.” And just the day before this reporter’s visit, a sudden problem with the water tower brought the cold room’s temperature up to a balmy 40 degrees Celsius.

“This is a kind of construction site,” Skok says.

By all accounts, NYU has managed the crisis admirably. As soon as they could get into the center, staff worked round the clock, hauling truckloads of dry ice and liquid nitrogen up multiple flights of stairs to try and salvage defrosting enzymes and degrading samples. They broke through the ceiling of the basement to rescue about 600 cages of mice — including 53 of Fishell’s — in the topmost racks that had survived the damage. They relocated 90 labs, and as many samples as they could, to buildings that had better weathered the damage.

By January, most labs, and any critical equipment, had homes elsewhere. By August, many of them were back. (In Skok’s case, for example, the staff helped move a $500,000 confocal microscope, which needs a special room at a specific temperature, to a biology building in the downtown campus — and then back again to the medical center in August.) “They went out of their way to accommodate our needs,” Skok says.

Still, there was only so much they could do.

Before the storm, Skok’s lab stored mice in the Skirball Institute of Biomolecular Medicine, part of the medical center complex. Much of Skirball was spared, but the mice were in the dark, and without heat, for several days. This sort of stress can affect the expression of genes, a central focus of Skok’s work. 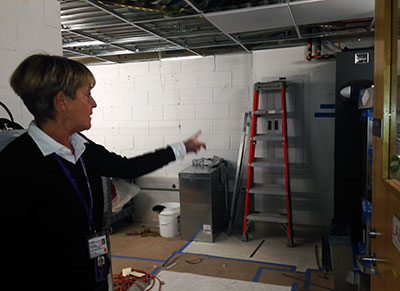 Construction zone: At Jane Skok’s lab, the equipment room doesn’t contain much that’s of use to her research.

Even after both light and heat were restored, some of the mice never fully recovered. “In the end, we decided not to do any experiments with the existing mice,” Skok says. “I didn’t want to be in the situation where you’re thinking, ‘Well, is this result interesting or is it an artifact of the hurricane?’”

Many of the stories that surfaced after Sandy are much like this — tales of time spent trying to recoup years, even decades, of work, commuting to multiple locations for a single experiment, or waiting for help to arrive from distant collaborators.

Hurricane Sandy’s true toll for science is the “astronomical” loss of time and effort, says David Gresham, assistant professor in NYU’s Center for Genomics and Systems Biology. “In most labs, that was where the real financial burden fell.”

Gresham was luckier than most. His building, located farther from the water than the medical center is, also lost power. He too lost tens of thousands of dollars’ worth of reagents, enzymes and other supplies, but he was able to save his lab’s irreplaceable resource: a collection ofyeast strains generated, in some cases, over decades.

The night of the storm, his department administrator called him at home, asking him to choose one item in his lab to save. He was told that electricians would hardwire it into emergency power that was available to light stairwells.

Gresham immediately chose the -80 degree Celsius freezer that contained his strain collection. “But some people had to make a difficult decision about what to save,” he says. “It was like Sophie’s Choice.”

Help, financial and otherwise, has been available to many of the labs that endured Sandy.

Apart from insurance reimbursements, the Federal Emergency Management Agency has contributed about $180 million thus far to NYU. The university also offered support to fledgling labs that might not otherwise have survived the upheaval. The National Institutes of Health granted most researchers a one-year extension on grants.

Fishell and Skok both suggest that not everyone who got help fully deserved it. “A lot of people are exaggerating up the wazoo,” Fishell says.

Overall, however, Hurricane Sandy seems to have brought out the best among scientists.

When news of Fishell’s losses became public, for example, emails began pouring in from scientists with whom he had shared his mice. More than 30 labs eventually sent him back mouse strains, allowing him to repopulate roughly 40 percent of his original collection. Some scientists don’t share their mice for fear of being scooped, but “that’s just stupid, it really is,” Fishell says.

This silver lining of scientific generosity shines through others’ experiences as well. “People who were my fiercest competitors were emailing me saying, ‘What do you need? How can we help? We’ll send you what you need,’” Skok says.

Stewart Anderson, Fishell’s most direct competitor, went so far as to offer Fishell space in his own lab at Cornell University. “It’s really a wonderful story of how the community works together,” Fishell says. “We work better when we work together.”

Still, NYU is trying to make sure its scientists won’t ever be in this situation again. In the new building that Fishell and others will occupy, set to be ready in two years, the mouse facility will be on the third floor. The temporary leased MRIs are on the lobby level of the medical center. When they arrive, the permanent MRIs, too, will be high enough above ground to withstand floods.

On a broader scale, the administration has plans for three levels of protection against future disasters: a 71,000-square-foot energy building to provide 11 megawatts of power for the medical center campus, 7.5 megawatts of emergency power and a new electrical service on the roof; a flood wall system to protect the campus perimeter; and a rapidly deployable flood barrier system called Tiger Dams.

The new facilities, due to be ready in 2017, are all being built to sustain floods many feet above the new federal flood requirements for the area, says Paul Schwabacher, senior vice president for Medical Center Facilities Management at NYU.

“We’re designing to a level that’s much, much higher,” Schwabacher says. “We’ll have a level of protection that’s second to none because of what we have learned.”