Odd brain patches point to origins of autism in womb 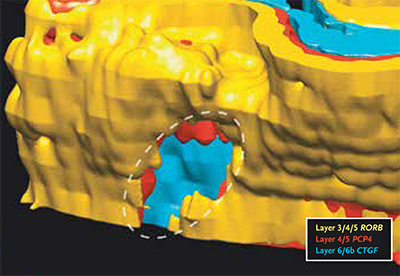 The brains of children with autism contain discrete patches of what look like immature neurons, according to a small study of postmortem brains published 27 March in the New England Journal of Medicine1.

These lesions are found in the cortex — the folded outer layer of the brain that governs many of the abilities affected in autism, such as language and social skills.

The findings are striking in that they show a physical abnormality that may be consistent across autism brains: The patches are present in 10 of 11 of the autism brains but only 1 of 11 controls. Among the autism brains, however, the patches vary in severity and location. This may explain the diverse range of symptoms seen in the disorder, the researchers say.

“We came in thinking that we were going to find more of a global effect across the cortex, and rather we found these very small patches,” says Ed Lein, an investigator at the Allen Brain Institute in Seattle. Lein and the Allen institute provided the genetic markers to characterize regions in the cortex. The possibility of a universal autism feature is exciting, but the study is small and therefore only preliminary, notes Lein. “We’d love to replicate the study in a larger cohort because it’s really surprising to see this kind of common affected pathway in autism.”

Other experts also note the small sample size of the study. What’s more, the regions tested are only a fraction of the cortex, says Joseph Gleeson, assistant professor at the University of California, San Diego, who was not involved in the study.

“There’s a huge potential for bias,” he says. “It’s like looking in several deserts and finding abnormal grains of sand.”

To find these ‘grains,’ the researchers cut a total of 35 samples of the cortex into 12,000 thin slices. They stained each of these with up to 25 markers that flag genes expressed by different types of neurons and support cells called glia.

During fetal development, neurons organize themselves into a column of six discrete layers within the cortex. The researchers used three-dimensional reconstruction software to reassemble the stained brain slices, revealing their layered architecture.

Within these brightly colored layers, they discovered small unstained clumps, ranging from five to seven millimeters in length. The absence of staining and the presence of some cells in the wrong layers suggest that the patches didn’t develop normally, says Courchesne. “It’s like looking back in time.”

The patches are present in most of the layers of the dorsolateral and prefrontal cortex — involved in high-level cognitive function — and not in the occipital cortex, involved in vision. (The researchers had only three autism samples from this last region.)

In contrast, the glia in the patches look normal. This should assuage any concern that samples from the affected regions deteriorated after death, notes Lein.

The study stands out because of the detailed set of genetic markers that reveal each cortical layer, experts say. “The combination of cutting-edge methods is striking,” says Steven Chance, research lecturer in clinical neuroscience at the University of Oxford, who was not involved in the study.

In particular, mapping the patches onto the layers allows the researchers to home in on when in development these changes may have occurred, he says. “It’s a bit like the rings of a tree — you have an idea of timing just by looking at that layered structure.”

The most severely affected regions in the cortex are layers four and five, which are among the first to be assembled.

Intriguingly, the patches have about the same number of neurons as unaffected regions do, but because the neurons don’t express the usual set of genes, their purpose remains a mystery.

“We don’t know what those cells are doing in those areas,” notes Courchesne. “Are they trying to change into the correct cell type? Are they a different type of cell that’s making abnormal connections? What are they?”

These are the next big questions, together with addressing what might create the disrupted patches, he says.

One possibility is that a mutation arises in one cell of the embryo, which then divides into a small cluster of abnormal brain cells, says Gleeson.

“The focal patches really suggest that the brain is a patchwork of different genetic components,” he says. “The follow-up work is going to be, what is the genetic makeup of those ten children?”

The researchers all emphasize that it will be important to confirm the results in more samples, although the scarcity of postmortem brains from people, and especially children, with autism may make that difficult.

“One of the advantages of the study is that it is on young people’s brains, which are difficult to study,” says Chance. “It is vital to have brain donation that encourages you to do this kind of research.”