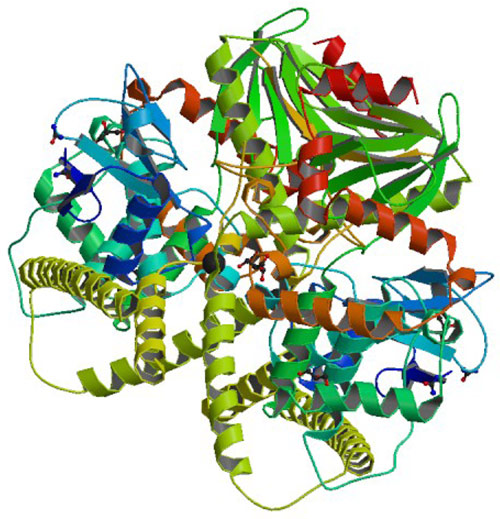 Small player: Moesin, a protein that is involved in brain development, appears to be regulated by a noncoding RNA that has been implicated in autism.

Researchers have identified a noncoding RNA, a genetic message that is not translated into a protein, that may be involved in autism. The discovery, published 4 April in Science Translational Medicine, came from examining a region on chromosome 5 that has been previously linked to the disorder1.

“This is the first time a major genetic signal for autism has pointed towards a noncoding RNA,” says senior author Daniel Campbell, senior author and assistant professor of psychiatry and the behavioral sciences at the Keck School of Medicine of the University of Southern California. The RNA appears to interfere with a gene on the X chromosome that is involved in brain development. Campbell says this unusual finding suggests that noncoding RNAs may play a larger role in the disease than previously thought.

A 2009 genome-wide association study (GWAS), in which the genomes of many people are scanned to find genetic associations with a disease, identified a region on chromosome 5 as a promising site for an autism risk gene2. The study compared more than 3,000 people with autism and more than 7,000 controls, and found common variants on chromosome 5 located between two genes: cadherin 9 and cadherin 10.

The cadherin genes code for proteins necessary for brain cell communication, and many researchers assumed they were top candidates for autism genes. But not everyone was convinced, because the peak signal — which suggests the location of a risk gene — was about a million base pairs away from either of the cadherin genes, a distance much farther than is typically seen for a genetic marker.

“When I looked at the paper, I said, ‘These two protein-coding genes are too far away from the genetic signal to be involved,’” Campbell says.

His research team looked more closely at the region of chromosome 5 implicated in the GWAS study, which does not contain any protein-coding elements. They analyzed genomic sequence data and used tiling arrays — a type of microarray that is useful for probing a region of the genome with unknown function — to identify possible noncoding RNAs in the region. They found evidence of a single noncoding RNA expressed directly under the peak found in the GWAS study.

The identity of the RNA is intriguing. The DNA sequence that codes for the RNA is antisense, meaning it is on the complementary strand of the double-stranded DNA helix, to a pseudogene. A pseudogene is a stretch of DNA that closely resembles a functional gene, but is itself not functional.

What’s more, the pseudogene shares 94 percent of its DNA sequence with a gene on chromosome X that makes the protein moesin, which helps connect the cell’s membrane and its cytoskeleton, or scaffolding, and is involved in brain development. This implied to the researchers that the noncoding RNA — dubbed MSNP1AS (moesin pseudogene 1, antisense) — is not only complementary to a pseudogene, but also to a functional gene with an important role in the brain, and that it might inhibit that gene’s expression.

The researchers verified that MSNP1AS is expressed in human cell lines and hybridizes to the moesin gene. Using postmortem brain tissue from the Autism Tissue Program, a repository of postmortem brains from individuals with autism and related disorders, they found that the levels of the noncoding RNA are 12-fold higher in brains from people with autism compared with controls, which Campbell says is a greater increase than has been reported for any protein.

Expression of the noncoding RNA is associated with the presence of the genetic risk markers identified by the GWAS, the study also found, suggesting that MSNP1AS may be the first ‘high-confidence’ gene for autism, according to criteria established by the Simons Foundation Autism Research Initiative Gene Scoring advisory board, of which Campbell is a member.

Moesin helps link the cell membrane to the external environment; knocking down the moesin protein in animals limits the growth of axons, the long projections along which neurons send electrical signals, and dendrites, the signal-receiving branches of neurons. Furthermore, moesin levels have been found to be decreased in the cerebral cortex of fetuses with Down syndrome3.

A previous paper on gene expression patterns in postmortem brains from people with autism compared with those from controls identified the moesin gene (MSN) as one of several ‘hubs’ in a network of co-expressed genes that were expressed at different levels in the autism group.

The researchers have not yet shown that the noncoding RNA can regulate moesin in living organisms. Because it is not produced in mice, Campbell plans to create transgenic animals that express the RNA to determine whether it regulates moesin during development.

Hakon Hakonarson, head of the Center for Applied Genomics at the Children’s Hospital of Philadelphia and senior author on the 2009 GWAS, says that this new study “is a beautiful example of a biological validation of a GWAS signal.”

Hakonarson says it’s particularly intriguing that the gene regulated by the noncoding RNA lies on the X chromosome. Autism is about four times more common in males, who only have one X chromosome and are therefore more sensitive to genetic mutations that affect it, and several studies have looked for autism risk genes on the X chromosome.

Studies have found altered levels of a type of noncoding RNA called microRNAs in postmortem brain tissue from people with autism, but the exact role of these and other kinds of noncoding RNAs in the disorder is an open question.

Zohreh Talebizadeh, director of autism research at Children’s Mercy Hospital in Kansas City, Missouri, says that the study shows the importance of “paying attention to those less-examined factors,” such as noncoding RNA, antisense sequences and pseudogenes, in studying genetic risk for disease. She says that such ‘nontraditional’ elements, not usually held at the top of candidate gene lists, deserve further consideration.

Campbell says his team is applying a similar approach to exploring other genetic associations in autism for which a causative factor is yet to be identified. He believes that this finding may be just the beginning: that noncoding RNAs will be found to play a larger role in disease.