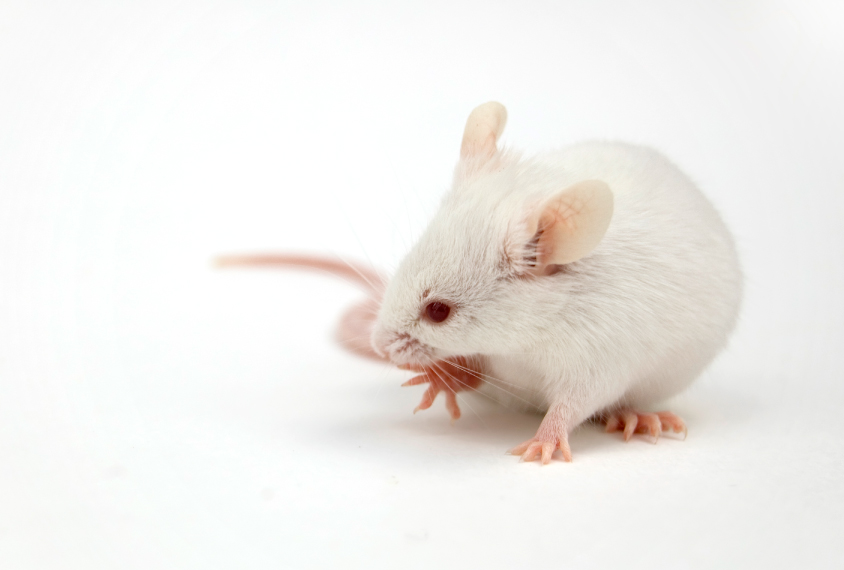 Switched on: Mice missing a gene linked to autism groom themselves more after being exposed to nightime light.

Mice missing the autism gene CNTNAP2 sleep more at night, when they should be active, and groom themselves more than usual when exposed to light at night, according to a new study. Both disruptions disappear when the mice are given the sleep hormone melatonin1.

The findings suggest alterations in the gene relate to a vulnerability to sleep disturbances, says lead investigator Christopher Colwell, professor of psychiatry at the University of California, Los Angeles.

Many people with autism struggle to fall and stay asleep. Lack of sleep can exacerbate some challenges associated with the condition, including repetitive behaviors and social difficulties.

Autistic people may also have unique susceptibilities to sleep disruptions from artificial light, some research shows2,3. Light from sources such as streetlamps or electronic screens at night interferes with the body’s 24-hour ‘clock,’ known as the circadian rhythm, which regulates patterns of gene expression, hormone levels, slumber and other functions4.

Clinicians often prescribe melatonin, a hormone that induces sleep in response to darkness, to people with autism, including children. The new findings suggest that melatonin can also ease some autism traits and that lighting considerations may be important for children with autism or other neurodevelopmental conditions, Colwell says.

“Lighting conditions may be even more important than we have appreciated,” he says. “I think this is low-hanging fruit in terms of management. This is about improving the quality of life.”

Colwell and his team examined sleep patterns, social activity and repetitive behaviors in mice missing both copies of the gene CNTNAP2. In people, mutations in this gene are associated with autism, language impairments and changes in brain connectivity.

Under typical lighting conditions — 12 hours of daylight and 12 hours of darkness — the knockout mice were less active at night, when mice are usually awake, than control mice. They also had small differences in their sleep patterns and in their circadian rhythms, based on patterns of gene expression and neural activity.

The knockout mice groomed themselves more frequently, an activity considered akin to repetitive behaviors in autistic people. The animals were also equally interested in interactions with an object and with a new mouse, whereas control mice preferred to engage with another mouse.

The patterns changed after researchers exposed some mice of each type to a dim light, about the brightness of a night light, all night long.

Both the CNTNAP2 mice and the controls exposed to nighttime light slept more at night than their undisturbed counterparts. They also showed lowered social interest: The knockout mice preferred an object, whereas the controls showed equal interest in the object and another mouse. Self-grooming increased in the night-light-exposed knockouts only.

The researchers also examined patterns of gene expression and electrical activity in neurons from the mice’s suprachiasmatic nucleus, a brain region that regulates circadian rhythms. Normally, these patterns differ between day and night, but cells from both knockouts and controls exposed to light largely lost this diurnal distinction. Nighttime light had a greater effect on cells from the knockout mice than on those from typical mice.

Giving night-light-exposed knockout mice an evening dose of melatonin decreased their excessive grooming behavior and increased their nighttime activity in general. Giving the mice melatonin in the morning was not effective, which highlights the importance of normalizing the circadian cycle, Colwell says. The findings were published in Neurobiology of Disease in September.

After two weeks without light exposure at night, both control and knockout mice returned to their usual patterns and behaviors, suggesting the effects are temporary. Future research should examine whether there are developmental periods in which light exposure and sleep disruption lead to more permanent changes, Colwell says.

The experiment does not perfectly mimic how light at night may affect sleep in people, says Philippe Mourrain, associate professor of psychiatry and behavioral sciences at Stanford University in California, who was not involved in the research. Exposure to light encourages wakefulness in people but does the opposite in mice.

The researchers also exposed the mice to constant light all night, but most people encounter it only sporadically — when using a device before bed, for example.

“It shows that circadian defects per se, without regarding any sleep defects, are already important for the autistic trait,” he says. “But if you really want to understand how to improve children’s health during development in terms of sleeping well at night, you need to take both into account, and mice cannot allow you to model that.”

Of note, the study is among the first to attempt to understand the causal relationships between sleep and severe autism traits, says Olivia Veatch, assistant professor of psychiatry and behavioral sciences at the University of Kansas, who was not involved in the work. Thus far, researchers have been unsure whether severe traits prevent sleep or lack of sleep exacerbates existing difficulties — or perhaps both things take place in a cycle.

The mouse model the researchers used does not naturally produce melatonin, so it’s interesting that the hormone would have any effect, she says.

“It’s just definitely not as straightforward as you would hope,” Veatch says. “But this is a step in the right direction toward teasing out what is actually causing sleep problems in individuals who have genetic mutations that are risk factors for autism.”

Melatonin can improve sleep in children with autism even when they already have the typical levels of melatonin, indicating that the hormone may have important functions beyond sleep, such as reducing anxiety, Veatch says5.

“We need to figure out what [else] melatonin does,” she says.

The researchers next plan to examine whether different colors of light have different effects. The blue wavelengths of electronics, for example, can boost attention and energy, which is good during the day but particularly harmful for bedtime, studies show. They are also investigating the role of brain inflammation in disrupted sleep.

This story has been modified to correct a statement about the effect of light exposure in mice and people.