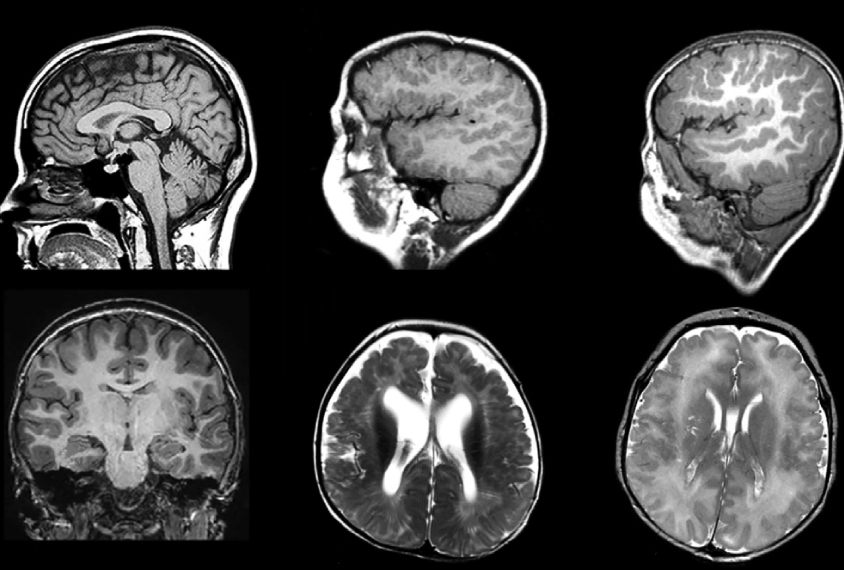 Nooks and crannies: Children with mutations in a gene called DDX3X have unusually small folds in their brains.

Researchers have cataloged more than 100 mutations in DDX3X, a candidate gene for autism1. The study is the first to closely analyze the relationship between these mutations and their effects on autistic people.

The researchers combined clinical observations and brain scans of children with genetic analyses in mice to probe the molecular basis of the children’s traits.

Researchers first linked DDX3X to autism in 2014, and to intellectual disability the following year2,3. The gene is located on the X chromosome, so mutations primarily affect girls; most boys with mutations in the gene are thought to die in utero.

Up to 3 percent of girls with unexplained intellectual disability have a mutation in DDX3X3. About half of them are also likely to have autism, says co-lead investigator Elliott Sherr, professor of neurology at University of California, San Francisco.

“The kids who have the milder form would present with still a significant clinical picture,” Sherr says. DDX3X “is probably hugely important in regulating the on-and-off of important genes that are key for early development.”

Different mutations in the gene lead to varied combinations and severity of these traits, the study found.

“This is key to consider when we think about therapeutic approaches in DDX3X syndrome,” says Silvia De Rubeis, assistant professor of psychiatry at the Seaver Autism Center for Research and Treatment in New York City, who was not involved in the new work.

Sherr and his colleagues analyzed the genomes of 107 children with mutations in DDX3X. Nearly all of the mutations arose de novo, or spontaneously, rather than being inherited.

About one-third are nonsense mutations, meaning that the gene fails to make the corresponding protein. And about half are missense mutations, which lead to the gene making a faulty protein. The results were published 4 March in Neuron.

Most of the 57 children with missense mutations have severe traits, including intellectual disability, low muscle tone and inability to walk. Brain scans show that they also have many unusually small folds in the brain, a condition known as polymicrogyria.

Three of the children carry the same mutation at the same spot in their genomes and have similar traits, implicating this mutation in their specific outcome, Sherr says.

“You can always say, ‘Well, maybe it’s just a coincidence,’ but the fact that it’s the exact same mutation many times and they all have the same phenotype is quite compelling,” Sherr says.

The researchers then used the gene-editing technique CRISPR to lower DDX3X levels in mice at different stages of development.

“The punchline of all of these efforts was that the brain is exquisitely sensitive to DDX3X levels,” Silver says. “Even a 25 percent reduction in DDX3X levels has a profound impact on neuron production.”

Fewer than 500 people worldwide are known to have DDX3X syndrome, according to the DDX3X Foundation, a nonprofit dedicated to the condition. Many more may be as yet unidentified, particularly because the gene’s link to intellectual disability was discovered only about five years ago, Silver says.

As researchers identify more children with the mutations, they may be able to pinpoint the effects of specific mutations.

Understanding these relationships will be important to ensure that people get the right treatments for the particular mutations they carry, says Tychele Turner, assistant professor of genetics at Washington University in St. Louis.

“Actually getting down to the functional aspect of these genes, and not just the genes but the mutations within them, is really critical,” Turner says. “And I think this study is showing exactly why, in terms of DDX3X.”

Because mutations in the gene largely affect girls, Turner says, a deeper understanding of its function could also help illuminate sex differences in conditions of brain development.