The ASD Nest program — so called because it seeks to create a nurturing environment for children with autism spectrum disorders — is embedded in 19 elementary schools and 2 middle schools throughout New York City. Another middle school and a high school are scheduled to open in the fall.

“Nest is probably the most effective inclusion program I have ever seen,” says Catherine Lord, director of the Autism & Communication Disorders Center at the University of Michigan.

Between 1991 and 2001, the nationwide percentage of children who spent a substantial part of their day in mainstream classrooms tripled. However, in most cases, this is inclusion in name only, says Brenda Smith Myles, consultant for the Ziggurat Group, a Texas-based assessment and intervention program for children with autism. “I call it proximity rather than inclusion,” says Myles.

For an inclusion program to work, it needs teachers trained to understand the special needs of children with autism, support from occupational and speech therapists, and planning time to discuss strategies for individual students, she says. Most publicly funded programs don’t provide any of these elements, she says.

The Nest program is unique in that all of those key features are built in. Teachers take autism-related courses before entering the program and, along with speech and occupational therapists, hold weekly case conferences about each child.

Replicating the Nest approach nationwide would greatly improve the employment outlook for people with autism, says Myles. “We’ve lost a generation of kids, as shown by the 12 percent employment rate of adults with Asperger syndrome and high-functioning autism,” she says. “Nest is one of the few programs to make sure that these kids succeed.”

Nest’s results speak for themselves.

More than 400 children with autism are registered in the program in kindergarten through 8th grade, with three boys in 12th grade at the Channel View School for Research in Queens, New York.

Last year, 80 of the students in grades 3 through 7 did as well or slightly better than their typically developing peers on a standardized test for English and significantly higher on one for math. One of the three high school seniors is a National Merit Scholar.

Among the first five children who went through the program from kindergarten through grade 8, three have been accepted into New York City’s ‘specialized’ high schools, an indicator of high academic achievement.

“It has saved the educational futures of many children [with autism],” says Shirley Cohen, professor of education at Hunter College of the City University of New York, who helped create the program in 2002.

At a visit in April to Public School 112 in East Harlem, where a Nest program was launched in 2005, student artwork and projects lined quiet, orderly classrooms and colorful hallways.

The Nest curriculum is the same as in other city schools, but teaching strategies and classroom environment are both specialized for the needs of children with autism.

For example, an ‘inquiry-based learning’ model allows the children to explore topics of interest by asking questions and researching the answers. This approach lets students take ownership of their learning, says Eileen Reiter, principal of P.S. 112. “We try to build on their strengths.”

Teachers prime children for new activities or situations and post daily class schedules, with activity cards moved into a separate column once completed. Each child with autism has an individual folder that lists, in words and images, his or her personal schedule for the day, including sessions with speech and occupational therapists.

Lord says she is impressed with the program’s high expectations for the children with autism both academically and socially — and with how the approach benefits the typical children in the classrooms. 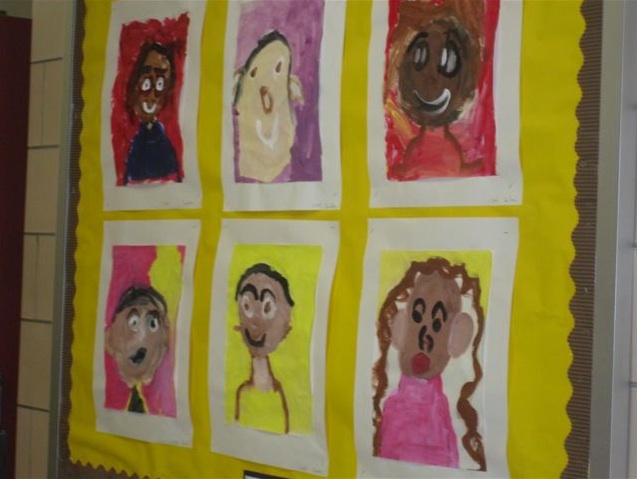 For example, teachers extensively use visual aids to supplement verbal directions — such as a poster that illustrates the ‘Magic 5’ steps for being a good listener: Sit like a pretzel, eyes on speaker, ears listening, hands in lap and quiet mouth.

Teachers also dim lights and hide distracting toys and books to minimize sensory overload, displaying only the materials needed for each lesson.

Together, these practices help manage the anxiety children with autism experience in new situations, says Cohen.

Children in the program have frequent opportunities to make choices throughout the school day, from deciding whether they want to use markers or crayons to deciding which story they’d like to listen to. Choice helps keep the children engaged in tasks, and minimizes negative behavior, says Reiter.

Each classroom also includes a ‘quiet corner,’ set off from the rest of the classroom and stocked with a bean bag chair, squeeze balls and headphones. A poster in each corner lists things a child can do when he or she is stressed: Take a break, count to 20, breathe in and out or push against the wall. Children are encouraged to take a break when they need one.

“We teach them to self-regulate,” says Reiter.

The Nest program is the brainchild of Cohen and Dorothy Siegel, the self-described “strongest advocate for special ed in New York City.” Siegel has a grown son with autism. Although she was able to find a slot for him in a private school, she was concerned about other children with autism who have limited options.

In 2002, she and Cohen launched a series of workshops on the need for special programs for children with autism who were not being well served by the city. The workshops led to a pilot program at P.S. 32 in Brooklyn in 2003.

The core of the program is inclusion: Each kindergarten class of 12 and elementary class of 16 includes 4 children with autism. “Every effort is made to treat them exactly the same as the other kids,” says Reiter.

The success of the program mainly relies on the well-trained teaching staff, says Siegel, many of them graduates of the Hunter College teaching program that Cohen has headed for many years.

Teachers take two courses — one on autism and one on behavioral therapy — prior to working at a Nest school and, once in the school, a course on the social development intervention used in Nest schools. They also attend regular in-service classes and workshops.

The social development curriculum, in which students are taught different ways to navigate social interaction through direct instruction and role-playing, benefits not just the children with autism but all of the students in the school, Siegel says.

“The goal is to make the six-and-a-half hour school day a therapeutic experience for all the children in the school, not just the kids with autism,” she says. “Those from a disadvantaged background benefit tremendously, but privileged parents want their kids here too.”

Prior to coming to P.S. 112, her son, who is now in 1st grade, attended a private preschool where he wasn’t playing with other children. After two years in the Nest program, she says, “his eye contact is better and his confidence has improved.”

Part of that improvement may be due to the peer-mediated instruction that is also part of the program. “You look for natural affinities between typical kids and kids on the spectrum and you build on those affinities,” Cohen says. “Sit them next to one another at the table and let the typical kids help the kids with autism.”

Though the program is growing — Siegel expects enrollment to reach 1,000 by 2015, expanding by about 100 children per year — she cautions that too rapid a scale-up would be unwise.

It takes time to train teachers, to allow the two teachers in each classroom to forge good working partnerships, and to create schedules that permit collaboration, she notes. “If you replicate too fast, it doesn’t work.”