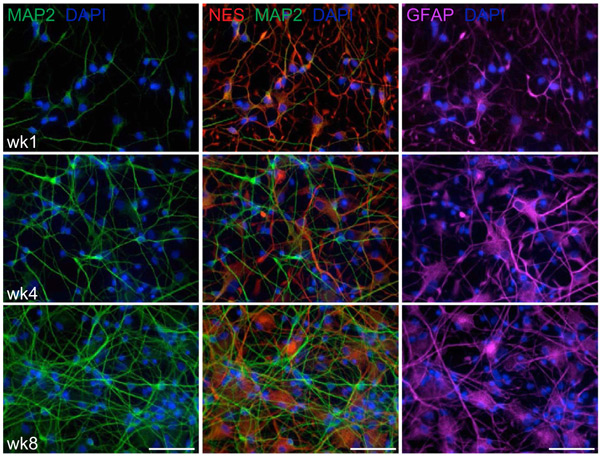 Creating neurons from stem cells in a lab dish is a popular approach for studying developmental disorders such as autism. For this, researchers begin with stem cells, either taken from postmortem fetal brains or reprogrammed from other cells. They then chemically coax them into becoming neurons.

But how closely do these dish-grown, or in vitro, neurons resemble mature neurons in an adult brain?

Two new methods, described separately in the 2 July issue of Neuron, attempt to answer this question by looking in detail at the genes expressed by the two kinds of neurons1,2. Overall, they suggest that neurons made from stem cells recapitulate the early stages of development, making them good models for disorders such as autism. However, the neurons never fully reach the maturity of neurons found in adult brains.

“This has been a question that’s been on people’s minds for a while,” says Daniel Geschwind, director of the Center for Autism Research and Treatment at the University of California, Los Angeles and lead researcher on one of the studies. “What we see is a huge conservation of early developmental processes in vitro, which would mean that they’re very useful for many things.”

Other researchers can use these new methods to assess how well neurons generated in their labs or from people with neuropsychiatric disorders match control neurons.

“These are things that we’ve been waiting for and they’re the perfect resource to have right at this time,” says Jeanne Loring, director of the Center for Regenerative Medicine at the Scripps Research Institute in La Jolla, California, who was not involved with either study.

Loring and her team are making neurons from skin cells taken from people with fragile X syndrome. They plan to use the tools to pinpoint any signs of abnormal development in the fragile X neurons.

Geschwind and his team removed neural progenitor cells — stem cells en route to becoming neurons — from human fetal postmortem brains. As these cells transform into neurons, the study found, they express most of the same genes as developing neurons in the brain do.

But the neurons remain immature, staying the same after the equivalent of up to 26 weeks of development. The cells are still good models for disorders such as autism, which is thought to begin during early development, but probably less useful for neurodegenerative disorders such as Alzheimer’s disease, says Geschwind.

The researchers used their gene expression data to build an algorithm, called CoNTExT, that can predict how far along in development in vitro neurons are, and whether they best resemble neurons from the cortex, hippocampus, amygdala, thalamus, striatum or the cerebellum.

Using CoNTExT, the researchers compared neurons derived from progenitor cells with those generated from induced pluripotent stem cells (iPS cells) — which are skin or blood cells that have been manipulated to return to an embryonic state.

Neurons from progenitor cells match neurons from the brain better than neurons from iPS cells do, the study found. For example, neurons derived from the iPS cells do not express a group of genes, including some autism candidates, that regulate the expression of many other genes.

The study also found that neurons from iPS cells made in different laboratories look significantly different from each other. This inconsistency is a well-known issue in the field, says Deyou Zheng, associate professor of neurology, genetics and neuroscience at Albert Einstein College of Medicine in New York City.

“Everybody just says they are making neurons, but they are actually different neurons,” he says. CoNTExT may improve the consistency by giving researchers a way to check the quality of their neurons.

The results from the second study complement these findings. In that study, researchers analyzed neurons generated from embryonic stem cells taken from postmortem fetal tissue. Unlike neuronal progenitors, these are pluripotent, meaning they retain the ability to become any cell type. After 80 days in a dish, these cells matured into neurons that resemble those found in the prefrontal cortex.

This subtype of neurons is of particular interest for autism research because the prefrontal cortex is involved in critical thinking and social behavior, says lead researcher Christopher Fasano, principal investigator at the Neural Stem Cell Institute in Rensselaer, New York.

Fasano and his team looked at gene expression at various points in the transition from stem cells to neurons. They used this information to construct a tool called CORTECON that allows researchers to find out when in development their gene of interest is expressed.

This sort of information can then be used to highlight how neurons made from people with a disorder differ, says Fasano. “We think we’ve created a gold standard of human [gene] development over time that people can compare with disease models to identify where and when the primary insult occurs.”

The researchers looked at only one type of embryonic stem cell, and there are known differences between different cell lines and techniques, notes Loring. Still, they are an important starting point, she says. “We think these papers were written specifically for us.”