New therapy shows promise for infants with signs of autism 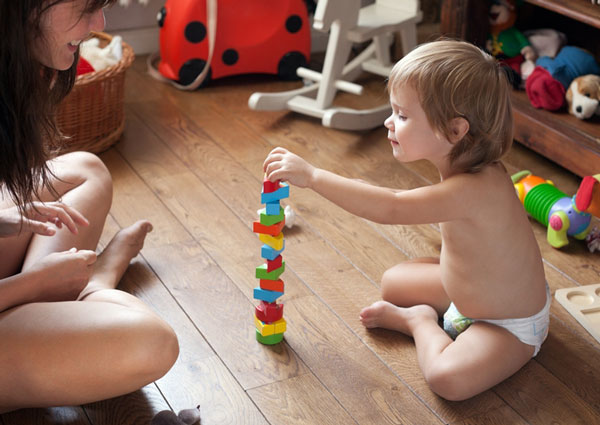 Routine regimen: In a therapy called Infant Start, parents teach their babies new skills during everyday activities such as eating, getting dressed and changing diapers.

A new interaction-based therapy delivered by parents may help infants with symptoms of autism improve their behavior and language skills, suggests a small pilot study published 12 September in the Journal of Autism and Developmental Disorders1.

By age 3, children who received the treatment, called Infant Start, had fewer autism symptoms than those who did not receive the treatment.

The researchers found that parents quickly learn how to administer the therapy, adhere to it well and rate their experiences highly.

This suggests that the treatment could be an inexpensive and more accessible alternative to conventional therapies, which can require as many as 30 hours per week of one-on-one time with a therapist. “This is an easier-to-implement intervention than other forms of therapy,” says Charles Nelson, professor of pediatrics at Harvard Medical School, who was not involved in the study. “And this is in the hands of parents, for the most part, and that’s what makes it scalable.”

However, the researchers themselves caution that it is too early to tell whether the treatment is effective and suitable for widespread use. The study is small and included a rare subset of infants who show symptoms of autism before 15 months of age. And while it included a control group of infants who did not receive the intervention, the participants were not randomly assigned to treatment or control groups, as is typically the case in studies of treatments.

“These are promising findings,” says lead investigator Sally Rogers, professor of psychiatry at the University of California, Davis. “But we await a well-controlled study before we have proof that this type of intervention could have significant effects on children’s symptoms.”

Other researchers also note that although the study is well done, the sample size of 11 (7 infants receiving treatment and 4 controls) is too small to draw firm conclusions.

“Small numbers are always pretty problematic,” says Joseph Piven, professor of psychiatry at the University of North Carolina at Chapel Hill, who was not involved in the study. “But it’s really a great proof of principle, and it begins to generate specific hypotheses for the future.”

There is little doubt that some children with autism as young as 18 months can benefit from interventions, but few are diagnosed before age 2. That may soon change. Studies over the past decade suggest that children with autism begin to show deficits in certain behaviors, such as smiling, imitating others’ actions and making eye contact, as early as 6 months of age.

Still, the available treatments are designed for toddlers, not infants. “I realized that if we did end up identifying autism at 6 months, we wouldn’t know what to tell the families to do,” says Rogers. “We don’t have any validated treatments for autism in children as young as 6 to 12 months.”

To address this need, Rogers and her team developed a therapy for infants based on a treatment program for toddlers known as the Early Start Denver Model (ESDM). In this program, therapists teach toddlers with autism new skills during play-based activities. Previous studies suggest that this strategy is effective for reducing autism symptoms in children as young as 14 months2.

The researchers had to modify the program for infants. “We couldn’t just take the ESDM and use it with babies who, in some cases, weren’t even sitting up yet,” says Rogers, one of the scientists who developed the ESDM in 2002. “We had to think differently about their problems, needs and learning styles.”

The Infant Start therapy involves activities that aim to treat six target symptoms of autism in infants, such as visual fixation on objects and abnormal repetitive behaviors. For example, parents of babies with these symptoms learned how to shift their child’s attention away from the object, or to teach their child new ways of playing with a toy.

Rogers and her colleagues tested the modified therapy with seven infants aged 6 to 15 months with these symptoms. They recruited four of the infants from an ongoing study of so-called ‘baby sibs’ — infant siblings of children with autism, who are up to 20 times more likely than the general population to develop the disorder themselves. Concerned pediatricians or parents referred the remaining three infants to the researchers.

“Our goal was to give parents these patterns that would become part of their everyday repertoire — to change the kinds of stimulation the children were getting and provide them with many more learning opportunities,” Rogers says.

“We don’t have any validated treatments for autism in children as young as 6 to 12 months.”

The researchers measured the children’s autism symptoms using two established screening tools: the Autism Observational Scale for Infants (AOSI), administered every three months, and the Autism Diagnostic Observation Schedule (ADOS) at 18, 24 and 36 months3, 4. They assessed language and visual processing skills at the same time points using the Mullen Scales of Early Learning. As a control, the researchers also tracked the outcomes of four symptomatic baby sibs who were eligible for the treatment but whose parents declined to participate in the study.

At 9 months, all of the children in the study had the same or greater severity of autism symptoms than a comparison group of infants who were later diagnosed with the disorder. But by age 3, the children who received the intervention had fewer autism symptoms than the children whose parents declined the intervention. At the end of the study, two of the seven children in the treatment group had an autism diagnosis, compared with three of the four in the control group.

“That was a big surprise,” Rogers says. The babies all showed a delay in language and visual skills between 9 and 15 months, but by 18 months, the treated infants began to reverse course and caught up by age 3 with typically developing children.

The findings need to be confirmed in a larger sample, but are exciting nonetheless, says Lonnie Zwaigenbaum, professor of pediatrics at the University of Alberta in Edmonton, Canada, who was not involved in the work. “The notion that you can both identify infants with symptoms and start intervention that’s specifically designed for infants with early signs of autism — that is an exciting development.”

Still, it’s unclear whether the intervention is what changed the children’s outcome. “You can say that these kids had a change in their behavior, but we don’t really know that it wouldn’t have happened [without the intervention],” Piven says.

Even if proven effective, the therapy is limited by the fact that few children show autism symptoms as early as those in the study.

“For me, the most important message here is that whenever a child is showing signs of autism and we can document that, they need to get into intervention quickly,” Rogers says. “It’s much harder to change patterns later on, when the gaps are bigger.”