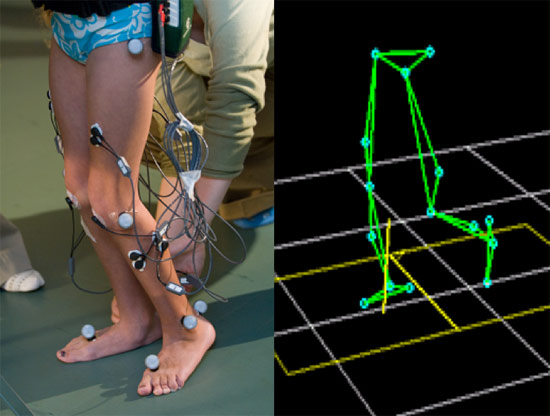 Live motion: Cameras track angles formed by the hips, knees and ankles as a person walks, to create a three-dimensional image of the body.

A three-dimensional motion-capture system developed for film animation has found subtle differences in hip and ankle movement in children with autism compared with typically developing controls.

Researchers compared 12 children with autism with 22 typically developing children, all between 5 and 9 years of age, measuring cadence — number of steps per minute — and other variables.

The study, published in Clinical Biomechanics in October, is the first to use the technology to measure gait patterns – the way that various muscles and joints align while walking – in children with autism1.

A 1993 study in adults with autism used a similar system, in which reflective markers attached to the foot, leg and torso are tracked by the camera, and used to calculate cadence and other features of motion2.

Lead researcher Victoria Chester has used the three-dimensional (3D) motion-capture technology to assess gait problems in children with cerebral palsy, but this is her first study in children with autism.

Chester undertook the research because, she says, there has been no comprehensive analysis of gait patterns in children with autism.

“In autism, most of the attention has been on social and communication disorders,” says Chester, associate professor of kinesiology at the University of New Brunswick. “The physical side has been a little bit ignored.”

Sensory motor issues have been understudied in autism, in part because of the emphasis on social and communicative aspects of the disorder in the Diagnostic and Statistical Manual of Mental Disorders.

“Those who have autism and motor deficits are thought not to have ‘pure’ autism, even though repetitive movements are one of the core symptoms of the disorder,” says Isabelle Rapin, professor of neurology and pediatrics at the Albert Einstein College of Medicine in New York.

Rapin’s work on repetitive movements in children with autism3 includes studies of gait, based on video observation. The 3D technology used in the new study has enormous potential to advance the field, she says, but the small sample size and other methodological issues — such as the exclusion of toe-walking, the most common gait deficit in autism —weaken its conclusions.

“The paper is dazzling from a scientific perspective, but weak from a clinical standpoint,” Rapin says.

The researchers analyzed the movement of joints and muscles during that cycle by attaching three reflective markers each on the foot, shank (knee-to-ankle), thigh, pelvis and trunk. The camera tracks those movements and sends the data to a computer that calculates angles formed by various body parts throughout the cycle.

Four force plates buried in the floor are also used to measure how much force the child exerts during the gait cycle. “Every time the foot hits the floor, I know how much pressure is put on it,” Chester says. “If you combine that data with the camera data, you can estimate kinetics — what the muscles are doing.”

One-third of the children with autism in Chester’s study had hypotonia, or low muscle tone, which is common in children with autism. This leads to weakness of the calf muscles at the back of the leg, which control movement of the tibia, or shinbone. “So we weren’t surprised to find problems at the ankle,” Chester says.

But the researchers also found that the children with autism took more steps per gait cycle, and that their hips don’t show the same range of motion as those of normally developing children. “There’s not as much backward motion in these kids,” Chester says. Usually, problems at the hip are connected with problems at the pelvis and knee, which the researchers did not observe in this study.

Esposito has identified significant differences in gait in toddlers with autism4, 5. He says motor assessment can be a useful tool in autism studies, but the lack of information on intelligent quotient and other diagnostic criteria for the children in the new paper make it difficult to evaluate whether the results are specific to autism. “Hypotonia is a main feature of global developmental delay,” he notes.

Finding specialists in gait who also understand autism is difficult, he adds. “People in kinematics have little clinical knowledge of autism, and vice versa.”

Rapin notes the same problem and says that she hopes the new paper may spur research on motor deficits in autism. “I view the sensory motor issues as extremely important.”