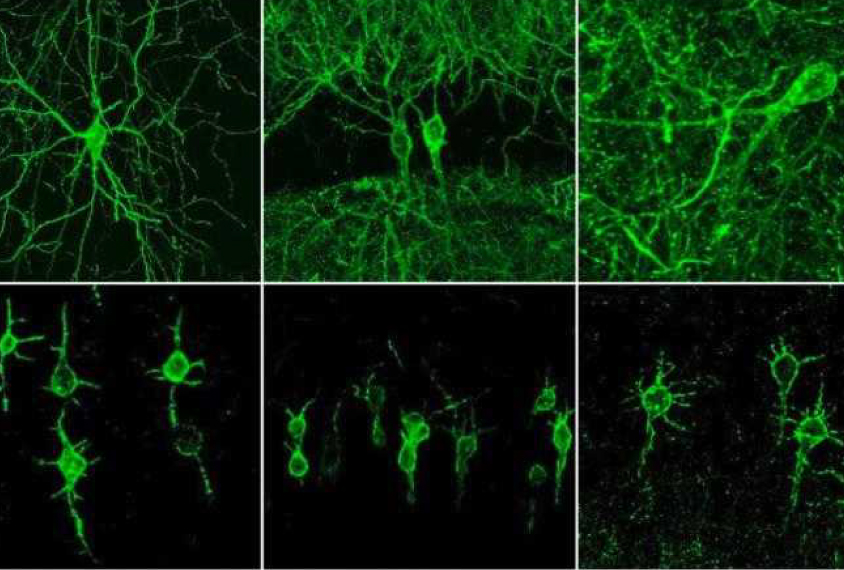 The researchers used a voltage-sensing molecule, called SomArchon, that causes active neurons to glow under a light microscope. The molecule can reveal the electrical activity of an average of 14 neurons at once — more neurons than usually possible with other methods.

The researchers were able to record neurons in the cortex, as well as regions deep in the brain such as the hippocampus and striatum, while the mice ran on a spherical treadmill. They presented the unpublished findings yesterday at the 2019 Society for Neuroscience annual meeting in Chicago, Illinois.

“SomArchon is usable with a very typical, conventional one-photon microscope, whereas other sensors require complex setups,” says Sanaya Shroff, a graduate student in Xue Han’s lab at Boston University who presented the work.

SomArchon is a modified version of another molecule, Archon, developed last year by researchers at the Massachusetts Institute of Technology. Both molecules embed in the membranes of neurons and glow fluorescent as the membrane voltage changes. Unlike its predecessor, SomArchon resides only in the membrane of the neurons’ cell bodies, minimizing the glare from neuronal branches.

Standard methods for recording neuronal activity involve inserting electrodes into the brain, but electrodes typically record from only a single neuron. Multielectrode arrays record from hundreds but pick up noise from neighboring neurons in densely packed areas.

With SomArchon, researchers can not only record from a population of neurons, but also genetically target specific subclasses of neurons. The work was published 9 October in Nature1.

Just like conventional electrodes, the technique can track fast-firing neurons. It also reveals voltage fluctuations in the membrane even before the neuron makes a spike, giving scientists a full view of a neuron’s behavior.