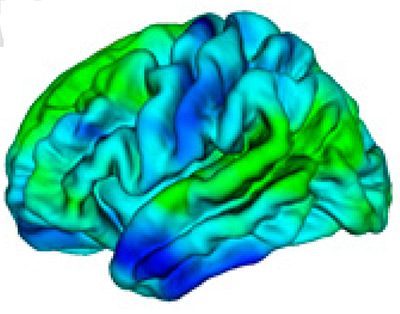 Link map: Individuals with autism have shorter connections in some brain areas (dark blue) than controls do.

A technique borrowed from geography bolsters the idea that altered wiring of the brain’s gray matter plays a role in autism, according to a report published 22 July in the Proceedings of the National Academy of Sciences1.

The method maps the hills and valleys of the brain’s cortex from standard magnetic resonance images (MRIs), examining patterns of connectivity between neurons.

“We think our findings are extremely exciting, as this is the first study to examine intrinsic connectivity in the living brain,” says Christine Ecker, lecturer at King’s College London and a researcher on the study.

The connectivity theory of autism posits that connections between neurons in people with autism differ in structure, organization2 and abundance from those of controls. But this theory has been subject to much contradiction and confusion. Different camps blame problems with long– or short-range connections in the brain and neuronal over-connectivity, under-connectivity, strength or weakness for the symptoms of autism.

Researchers capture connectivity with myriad imaging techniques, but most studies in people focus on the ropy long-range connections within the brain’s image-friendly white matter3.

Despite being the seat of consciousness, emotion and behavior, the brain’s gray matter has had little play in this arena, as connections between neurons are too delicate to visualize in the living brain. “We normally don’t have enough spatial resolution,” says Ecker.

In the new study, instead of trying to measure the connections directly, the researchers measured folds of the physical structure seen in the MRIs as a proxy for the relative connectivity of a region.

They turn out to be good proxies: Shorter connections in the gray matter predict both who has autism and which individuals with autism have the most severe symptoms.

The researchers analyzed MRIs of 34 right-handed men, 18 to 43 years old, with autism and 34 men without autism who were matched for age, handedness and other characteristics. They modeled the surfaces of the cortex by laying a virtual mesh of triangles over the images to measure distances between points along the outer surface of the brain.

“I think that a huge strength of this study is that [Ecker] and her whole team have been developing new ways to look at standard structural images, says Christine Nordahl, assistant adjunct professor of psychiatry and behavioral sciences at the University of California, Davis MIND Institute. “These are scans that all of us have just lying around in our databases.” 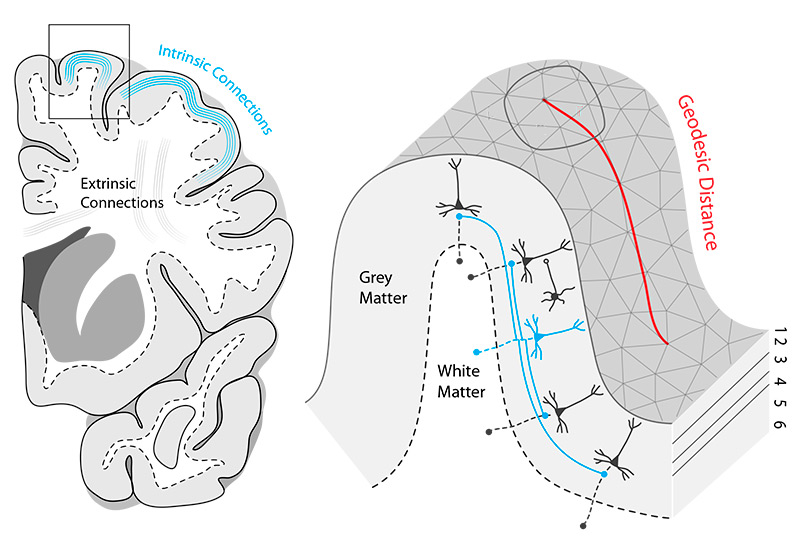 “It can be used to compute the shortest path across a mountain range, so the algorithm needs to take into account peaks and valleys and to compute the distance based on that geometric information,” Ecker says.

The shorter the distance between two points, the more easily those points can be connected. As the complexity of the surface increases, neuronal fibers in the cortex form networks of short connections, crowding out longer, more efficient connections. The researchers dubbed the shortest path between any two points on the cortex the ‘mean separation distance’ (MSD).

The men with autism have significantly shorter MSDs in left hemisphere brain regions that are known to be anatomically different in autism, such as the frontal and temporal lobes, compared with controls.

“We think that such differences in neuronal wiring may lead to locally over-connected networks in the brain in autism spectrum disorders that could explain some autistic symptoms,” says Ecker.

For example, among the men with autism, those with the shortest MSDs in right hemisphere areas, such as the somatosensory, motor and premotor areas of the cortex, have the most severe repetitive behaviors, as scored with the Autism Diagnostic Interview-Revised. None of the controls have MSDs shorter than those of the men with autism, nor do they show repetitive behaviors.

“The idea behind it is very clever,” says Paul Thompson, professor of neurology at the University of California, Los Angeles Laboratory of Neuro Imaging.

“They are saying there is a feature of the brain that they have identified that implies too many short-range connections,” Thompson says. “Too many short hops wouldn’t be an efficient way to travel through a network.”

Thompson suggests thinking of it in terms of a traffic analogy. If freeways connected every block in a city, there would be tremendous congestion, he says, and no way to efficiently move long distances across the city. It may be that during a typical brain’s development, the extra, short-range connections in the gray matter are pruned away in favor of long, efficient mental freeways.

As a proof-of-concept study on a relatively small sample of men, the study’s findings cannot be applied to people with autism in general. The researchers say they hope it will inspire other groups to examine their populations of interest.

To that point, Manzar Ashtari points out that this relationship between MSDs and autism symptoms may not apply in children whose brains are still developing. And any study of brain architecture in adults with autism must also factor in medication use, she adds.

“Medication affects the brain,” says Ashtari, director of the Diffusion Tensor Image Analyses and Brain Morphometry Center of the Children’s Hospital of Philadelphia. “If you are studying adults, you are now seeing the accumulation of all the medications that they’ve had throughout their lives.”