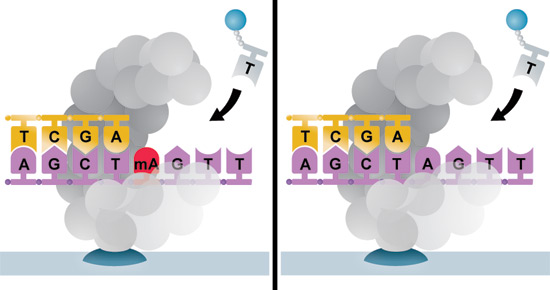 Speed reading: A new method locates methylated DNA (red) by measuring the time it takes an enzyme to decode each letter of the sequence.

A new technique can simultaneously sequence DNA and pinpoint some of the chemical modifications that turn genes on or off, according to a report published 9 May in Nature Methods1.

In particular, the technique reveals methyl groups bound to DNA bases. DNA methylation — one of several types of ‘epigenetic’ changes — allows organisms to express genes at various times, and in different tissues, without changing the underlying DNA code.

Epigenetic changes, which are influenced by environmental factors such as diet, may be important in autism. Candidate genes account for less than 10 percent of all cases of the disorder.

“Epigenetics is that extra layer on top of the genetic code,” says Janine LaSalle, professor of medical microbiology and immunology at the University of California, Davis. “For a complex disorder like autism that’s a combination of multiple genetic risk factors and environmental risk factors, epigenetics is right there where the action is.”

The standard technique for mapping methylation is to treat DNA with bisulfite, which converts unmethylated cytosine bases to an RNA base, uracil. Sequencing the DNA after this conversion pinpoints the methylated cytosines that remain.

The problem with this method is that it obfuscates the original DNA code. Sequencing machines mistake uracil bases for thymine bases, so the bisulfite treatment makes it impossible to distinguish between thymines and converted cytosines.

The method also doesn’t differentiate between methylation and hydroxymethylation, which involves the addition of both a methyl group and a hydroxyl group to a DNA base. “I think functionally they’re going to turn out to be very different modifications,” LaSalle says.

The new approach, developed by California-based Pacific Biosciences, could solve both problems.

In the technique, the DNA polymerase enzyme ‘reads’ a string of DNA by building a complementary strand made of fluorescent nucleotides. When each nucleotide joins the growing strand, it emits a flash of light, effectively labeling it with a different color.

The speed of this process depends on whether and how a base is methylated, so measuring the time between each pulse of light distinguishes cytosine methylation, cytosine hydroxymethylation and adenine methylation. “One might make the polymerase decide to do a fox trot, and the other might make it decide to do a samba,” says Stephen Turner, chief technology officer and founder of Pacific Biosciences.

Identifying methylated bases using this method doesn’t require extra steps beyond DNA sequencing, Turner notes. “A genomics researcher who had no intention of studying epigenetics could by accident stumble upon something epigenetic in nature, which right now cannot happen.”

Turner’s team tested their technique on synthetic DNA. Some researchers caution that the technique may not be as effective on complex human DNA.

“The challenge is not just to study methylation, but to study methylation in developing systems,” adds Jeanne Loring, professor of developmental neurobiology at the Scripps Research Institute in La Jolla, California. In February, Loring and colleagues used bisulfite sequencing to make DNA methylation maps of human stem cells and differentiated cells.

“[The new technique] is going to have limited use unless it proves to be an accurate way of doing that,” Loring says.

Amanda Leigh Mascarelli contributed to the reporting for this article.