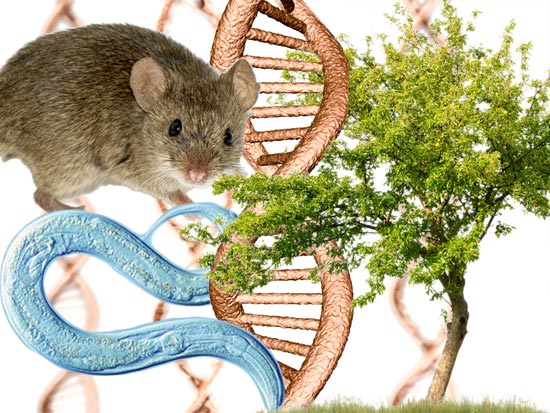 A new model that compares how the same genes behave in different organisms could help researchers identify previously unknown candidates for diseases such as autism1.

The model, published in April in the Proceedings of the National Academy of Sciences, takes advantage of the genetic overlap between humans and simpler organisms to discover genes associated with complex diseases.

“I think this research could be important for understanding the genetics of autism as well as other diseases,” says Ali Torkamani, professor of medicine at the Scripps Research Institute in California.

Humans share many genes with simpler organisms such as mice, yeast, worms and plants. In fact, about 99 percent of human genes have mouse counterparts, and about 80 percent of those genes are identical2. Although yeast and worms are not as similar to humans as mice are, they also share a significant portion of their genetic material with humans3.

Over the years, researchers have linked specific genetic mutations to certain visible traits. For example, a defect in the SOX13 gene is associated with an inability to grow new blood vessels in humans, mice and frogs. From these studies, researchers have generated large databases of gene-trait relationships, such as the Saccharomyces Genome Database of the yeast genome and the Mouse Genome Informatics database.

In the new study, researchers first combed through the literature and found a set of 1,923 human genes associated with various illnesses. They also mapped out the same genes in mice, worms and yeast and determined the visible trait associated with each gene. For example, a mutation in the RB1 gene in humans causes cancer of the retina, whereas the same mutation causes a worm to grow an additional vulva4.

“Using this logic, we also wanted to know, for instance, what the worm equivalent of breast cancer might be,” says lead author Edward Marcotte, professor of biochemistry at the Howard Hughes Medical Institute at the University of Texas.

Based on a literature search, Marcotte and his colleagues determined that breast cancer is associated with a mutation on the X chromosome that prompts excessive cell growth in the breast. They found that the same mutation causes worms to produce 10- to 150-fold more male offspring than normal5.

The researchers then identified 13 other genes that cause worms to produce more males. They found that of the 13, 9 had already been linked to breast cancer. Marcotte says the other four genes represent new candidates for breast cancer risk.

“The methods being employed appear to be quite powerful in identifying additional candidate genes that may have been unnoticed,” says Tim DeLorey, senior research scientist at the Molecular Research Institute in Palo Alto, California, who was not involved in the study.

The researchers have also generated gene-trait models for angiogenesis — the process of growing new blood vessels — in humans and cell-wall growth in yeast, for Waardenburg syndrome, a rare genetic disorder often characterized by deafness and defects in facial structure, and for gravitropism, the ability to grow in response to gravity, in plants.

They are also identifying mouse traits that predict new genes associated with autism. The team is evaluating several promising genes, but declined to reveal details because the results are unpublished.

“With complex disorders like autism, it is often more difficult to pinpoint new candidate genes that are key players in the disorder,” says Marcotte.

Researchers may find an association between a genetic mutation and a behavior associated with autism, but that does not indicate whether the gene plays a major or minor role in the disorder, Marcotte notes.

Still, the mouse models could confirm whether particular genes are worthy of further study, says Torkamani. “This could give researchers more confidence or less about the gene candidates they want to focus on.”