New ‘mirror neurons’ reflect the attention of others 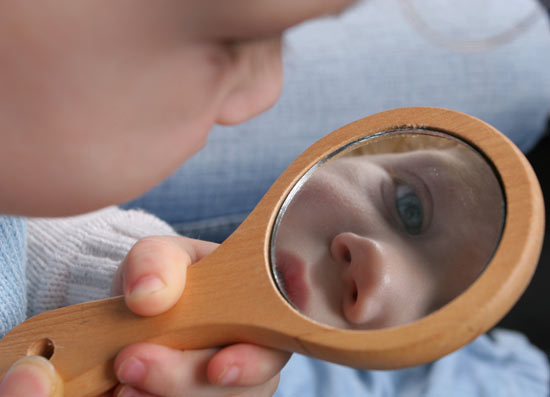 Look and fire: Although mirror neurons have not yet been found in humans, animal research suggests the cells play a key role in gazing and imitation behaviors.

Scientists have discovered a group of neurons in monkeys that fire both when the animals follow the gaze of others and when they look in the same direction themselves, according to research published 9 June in the Proceedings of the National Academy of Sciences1.

The finding marks the first experimental discovery of so-called ‘mirror neurons’ for attention. Studying these cells may help researchers better understand the brain impairments underlying characteristic deficits of autism, such as diminished eye contact and joint attention, the act of paying attention to the same object as someone else.

Mirror neurons — which have so far been identified only in monkeys, but are thought to exist in humans as well — fire when an animal witnesses or imitates the action of another. Some scientists speculate that the cells are crucial for helping promote social bonds and learning skills in people2.

Until now, researchers had described only one other group of mirror neurons, which fire both when a monkey executes a particular movement — such as grasping or manipulating an object — and when it observes another monkey doing the same action3. In contrast, the newly discovered cells fire when monkeys watch or mimic the gaze of another animal.

“As these neurons are mirroring the attention of other individuals, we speculate that these are mirror neurons for attention,” says senior author Michael Platt, associate professor of neurobiology at Duke University Medical Center. “Having identified these, we can now try to determine exactly how they contribute to social behavior.”

Mirror neurons and their role in social learning has been the subject of intense speculation for many years. Some scientists suggest that a malfunction in the circuitry that includes these neurons could explain why people with autism have trouble imitating and looking at others4.

Unfortunately, speculation about mirror neurons and their role in social behavior has so far exceeded actual evidence of their existence, says Raphael Bernier, assistant professor of psychiatry and behavioral sciences at the University of Washington. The new research makes the idea more plausible.

“Theoretical papers about mirror neurons have outpaced empirical studies, so I am very happy that this is a paper that provides some real empirical scientific evidence,” says Bernier.

The study is also valuable because it describes mirror neurons in the lateral intraparietal lobe, a region thought to be important for attention, Bernier adds. Previously, scientists speculated that the cells are located primarily in the nearby inferior parietal lobe and in the inferior frontal gyrus, regions that are especially active in sensory processing and language tasks.

“This paper has demonstrated some mirroring activity in another region, which tells us that maybe we should be thinking more broadly in the brain,” Bernier says.

In the new report, researchers implanted fine microwires into the brains of four rhesus macaque monkeys to sense and record electrical activity. They found 153 neurons that fired whenever the monkey shifted its gaze in a particular direction — some when the animal looked left, others when it looked right, up or down.

The scientists then showed the animals digital images of other monkeys looking either to the left or to the right. Immediately after the picture disappeared, a yellow box appeared randomly on either the left or the right side of the screen.

Intriguingly, the same neurons fire when a monkey observes a pictured animal looking in a particular direction as when it gazes in the same direction itself.

“What seems to be important is that in both primates and us, these neurons are perhaps specialized for linking social stimuli to attention,” Platt notes.

Previous work has shown that, like monkeys, people look at a given target much faster if they’ve seen another individual looking at it, implying that gaze patterns in humans and primates are similar5.

Because the experimental procedure for locating mirror neurons requires complex and invasive brain surgery, studies to pinpoint these cells in humans have progressed slowly. No one has yet identified mirror neurons in people6. A few functional magnetic resonance imaging studies, however, have found particular brain regions that preferentially respond to both observed and executed movements.

The new study could help researchers further probe whether malfunctions in the mirror neuron system contribute to some of the abnormal social behaviors exhibited by people with autism.

In future experiments in monkeys, for example, researchers could temporarily switch off the mirror neurons and then observe how the cells’ absence affects gazing behavior, Platt says.

In people, researchers could use brain imaging to explore the function of mirror neurons before and after implementing behavioral interventions to treat deficits in eye contact and joint attention in individuals with autism, Bernier says.

The success of these approaches, however, would depend entirely on whether mirror neurons have anything to do with the symptoms of autism, says Christian Keysers, scientific director of the NeuroImaging Center at the University of Groningen.

“The literature on motor mirror neurons is controversial in terms of its explanatory power for autism,” Keysers says.

Although the new study couldn’t explain the wide variability in gaze deficits among people with autism, “it does help us in understanding where [in the brain] we should look for differences,” he adds.

What’s more, the results bode well for using primates to study some aspects of social behavior.

“These studies are really hard to do and take a long time,” says Platt. “It’s very satisfying to demonstrate a critical link in social information processing that seems to guide a behavior that is identical in monkeys and in people.”