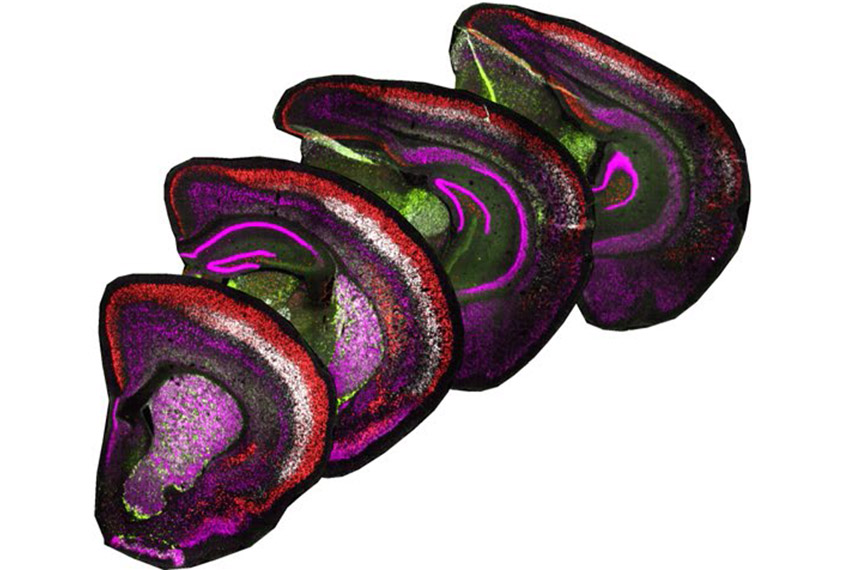 Building brains: Astrocytes develop in layers that are distinct from those of neurons.

Star-shaped cells called astrocytes play a greater role in brain development than previously thought, according to a new method for mapping gene expression1. The technique could help researchers understand how the brain develops in people with conditions such as autism.

To map out cell locations and functions in the brain, researchers often analyze the expression of messenger RNA, known as the transcriptome. The usual approach involves breaking down large amounts of tissue into a soup of individual cells, which destroys information about how cells function in relation to one another.

The new method combines imaging and data analysis tools to automate the process and avoid that first step. Unlike previous methods, it can be used on large datasets, such as those generated by the Human Cell Atlas and the U.S. Brain Research through Advancing Innovative Neurotechnologies (BRAIN) Initiative.

The researchers screened 46 genes that are expressed in astrocytes in different regions of the mouse cerebral cortex — the brain’s outer layer — and compared them with existing maps of gene expression.

Astrocytes make up about half of the brain’s cells and serve to scaffold and insulate other neurons, among other functions. Research shows that astrocytes can cause inflammation that damages neurons in the brains of autistic people. The cells also express proteins implicated in the condition.

Next, the team created transcriptome maps at the resolution of individual cells. The maps revealed that astrocytes develop in layers that are distinct from other cell layers in the cerebral cortex. Astrocytes in different layers also have distinct shapes, suggesting they may play different roles.

The researchers confirmed the findings from the mice in human cortex cells.

Because the technique combines speed with the ability to maintain cell structure, it could help researchers home in on how astrocytes and related cells contribute to autism and other neurodevelopmental conditions.