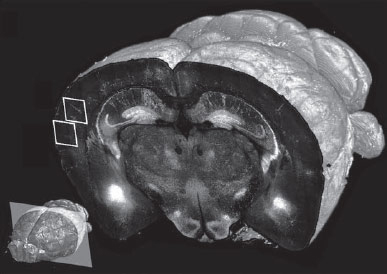 Moving pictures: An automated imaging technique reveals patterns of neuronal under- and over-activity in the brains of autism mouse models.

A new imaging technique that can assemble finely detailed pictures of an individual mouse’s brain in less than a day is being used to explore mouse models of autism. Data from the first two models were presented Wednesday at the 2013 Society for Neuroscience annual meeting in San Diego.

The technique, called serial two-photon (STP) tomography, was developed in Pavel Osten’s lab at Cold Spring Harbor Laboratory in New York. The automated technique cuts a mouse brain into 280 thin slices, which are scanned by a powerful microscope and the resulting images are then stitched together into a three-dimensional view.

The researchers used this technique to investigate the imbalance of excitatory and inhibitory signals in a mouse model of 16p11.2 deletion. People missing this chromosomal region have an increased risk for autism, and about one-quarter have epilepsy, in which an excess of excitatory signals causes seizures.

Mice with 16p11.2 deletion don’t have seizures, but they have higher activity in some areas of the brain, including the infralimbic area, nucleus accumbens and striatum, than controls do.

The 16p11.2 deletion mice are also more sensitive to a drug that blocks inhibitory signals in the brain, experiencing more severe seizures at lower doses of the drug than controls do. What’s more, the mice have different patterns of brain activity than controls even when experiencing seizures of the same severity.

One advantage of STP tomography is that “you can see the whole brain at the same moment,” says Julian Taranda, a postdoctoral researcher in Osten’s lab who presented the work. That’s particularly useful in this case because there are many areas that show increased sensitivity to the drug in the 16p11.2 deletion mice: the somatosensory, cingulate, auditory and visual areas of the cortex, as well as the central medial and medial dorsal areas of the thalamus, for example.

Taranda next plans to try to reverse the vulnerability to seizures in the mutant mice by giving them valproic acid, an epilepsy drug, and seeing how this affects the activity in different areas of the brain.

The researchers also investigated mice lacking CNTNAP2, a gene that has been linked to language impairment and autism. Mice lacking this gene have social deficits.

But when another mouse is added to the home cage, differences emerge. The mice lacking CNTNAP2 show less activation in the reward circuit of the brain than controls do. And they have more activity than controls in some parts of the amygdala and hypothalamus, areas associated with fear and other negative emotions.

This unusual response may give clues to the social deficits seen in these animals, says Yongsoo Kim, a postdoctoral researcher in Osten’s lab who presented this study. “The social stimulus should get a positive response.”

Peter Jones, a postdoctoral fellow at Carnegie Mellon University in Pittsburgh, spent 15 minutes or so quizzing Kim about the statistical analyses and procedures used in the study. “This is really, really cool,” he said, finally.