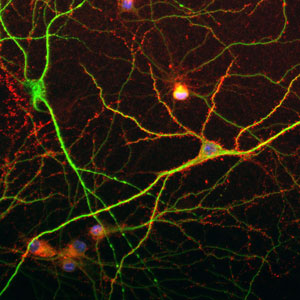 Researchers are testing a wealth of new treatments for fragile X syndrome, an inherited intellectual disability that is often accompanied by autism. They presented preliminary results from animal studies of several drugs, as well as an automated approach for screening compounds, Sunday at the 2012 Society for Neuroscience annual meeting in New Orleans.

Animal models designed to mimic fragile X syndrome produce an excess of proteins at the synapse, the connection between neurons, and have deficits in the cell’s ability to alter its connections based on new information.

Asha Bhakar, a postdoctoral fellow in Mark Bear’s lab at the Massachusetts Institute of Technology, and her collaborators are developing a high-throughput method for screening drugs that fix synaptic deficits.

The researchers first grow cells isolated from the brains of either fragile X mice or controls in 96-well plates. They then use an automated microscopy device, along with specialized software, to look for differences in the neurons and synapses, or in response to treatments between the two sets.

“The goal is to define what synaptic deficits are important and which we can see using this model,” says Bhakar. “One of the advantages of this approach is that it’s very objective — we’re not looking at one ideal cell; we’re looking at whole populations of cells.”

The researchers are also able to look at many cultures, in this case 50 cultures from fragile X mice and 50 controls. Bhakar says this approach washes out insignificant effects that one might see studying only a few cultures of each type.

In this case, researchers studied neurons from mouse brains, but Bhakar says that any cell type, such as stem cells from people with the disorder, can be used in the assay.

So far, the researchers have shown they can pick out cell nuclei and different types of synapses and can detect response to drugs that affect cell activity.

They don’t see differences between fragile X and control cells in the number of cells or in cell survival. But the fragile X neurons are more active than controls, and they have fewer post-synaptic puncta, markers of the synapse on the signal-receiving side.

Bhakar says the automated detection software does not effectively detect the characteristics of dendrites, the neuronal extensions that form connections between cells. But she is working with a collaborator to develop specialized software for this purpose.

Much of the research into treatments for fragile X has focused on a molecule called mGluR5, which is overactive in fragile X syndrome. Drugs that block mGluR5 treat both the behavioral and molecular symptoms of the disorder in mice. And a clinical trial published last month suggests that a drug that indirectly targets mGluR5 activity improves social behavior in children with the disorder.

But scientists are also exploring other drug targets. A toxin called cytotoxic necrotizing factor 1 (CNF1), which regulates cell architecture, can improve two measures of learning in fragile X mice, according to research presented at the conference.

Mutant mice are worse than controls at distinguishing a novel object from a familiar one, a deficit that improves after injection of CNF1. The drug also improves fear memory in the mutant mice.

Other researchers are focusing on GSK-3, an enzyme that is involved in neuronal development and has been shown to be overactive in fragile X mice. Lithium, a drug that inhibits GSK-3, lowers excess protein synthesis in fragile X mice and restores the neurons’ ability to fine-tune signaling. But lithium also affects other molecules in the cell, and has serious side effects, so it’s not an ideal drug for treating children with the disorder.

In new research presented at the conference, researchers showed that both lithium and a more selective inhibitor of GSK-3, called CT99021, rescue a form of neuronal learning in brain slices from fragile X mice.

That supports the idea that hyperactive GSK-3 is the culprit behind the cellular learning problems, and highlights the enzyme as a potential drug target, says Aimee Franklin, a graduate student in Lori L. McMahon’s lab at the University of Alabama at Birmingham.

However, the study used high doses of lithium. The researchers are testing levels more in line with those used in people, and feeding it to the mice rather than delivering it directly to brain slices.

They also aim to look for additional compounds that target GSK-3 or its downstream targets. GSK-3 is also a target for Alzheimer’s drug candidates, so there are many such compounds under development, says Franklin.

Correction: This article has been modified from the original. An earlier version reported that fragile X neurons have more post-synaptic puncta than controls do, when in fact they have fewer.