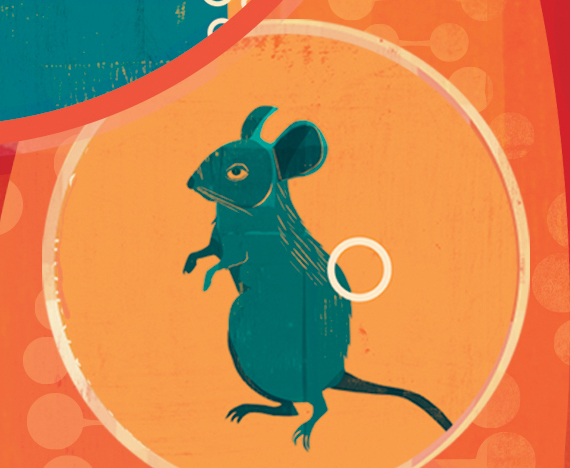 With a tiny diode inserted into a mouse’s skull, researchers can stimulate its neurons while it runs freely on an exercise wheel or crawls through cardboard tubes, they reported yesterday at the 2014 Society for Neuroscience annual meeting in Washington, D.C.

It’s been seven years since researchers invented optogenetics: Like something out of a science fiction film, the technique allows researchers to control mice using only beams of light.

Compared with remotely controlling a live animal, getting the light into their brains seems banal. But doing this without restricting the mice’s behavior has long been a limitation of the technique.

The first iterations of optogenetics used long cables that tethered the mice to the cage. An advance published last year shrank the cables down to a few millimeters and used light-emitting diodes (LED) as tiny light sources that could be implanted in the mice’s brains. But for the researchers to power and control the LEDs, the mice still had to wear large wireless antennae atop their heads. These antennae are about a tenth of the average mouse’s weight — akin to a man carrying a toddler on his head.

At a poster session yesterday, Alexander Yeh, a recent graduate from Ada Poon’s laboratory at Stanford University in California, presented a new miniature device that leaves the mice unfettered by any tethers. This is especially useful for assays of social behavior, which headgear is likely to hinder. The device is also less likely to make the mice anxious than the bulkier previous versions.

The modified technique relies on a special chamber that concentrates radio frequencies and directs them toward the mouse. The implant, a cube of ten millimeters per side, contains a tiny wire with an LED at the tip. At the top is a miniature power-receiving coil that detects the radio frequencies.

The researchers thread the thin wire into the desired brain site while the rest of the receiver sits above the skull just under the scalp. The device is so small that researchers can also place it against the spine or at any other nerve ending in the body.

Yeh tested the device by activating neurons in the motor cortex, which causes the mice to walk in a circle. He also showed examples of mice wearing the device while running in a rotating wheel or through a small tube — neither of which would have been possible with the earlier methods.

The researchers’ first attempt at studying social behavior is unusual: Placing four mice in a tiny cup while using the sensor to trigger pain in their hind legs.