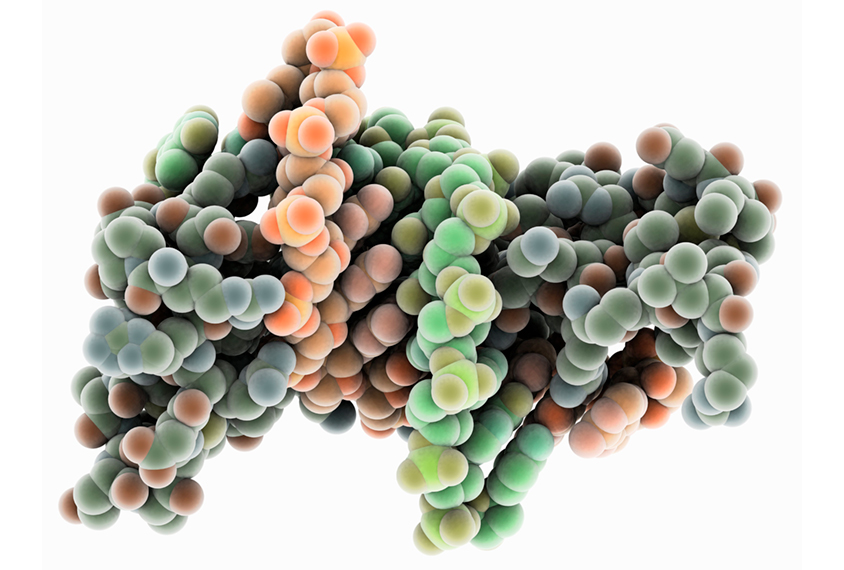 Special delivery: Stem cells can be modified to produce a therapeutic protein in the brain.

Two unpublished studies detail improved methods for delivering gene therapies to the brain: One involves a type of stem cell that can produce gene-altering proteins on-site; the other taps an engineered virus to target neurons efficiently and noninvasively.

Researchers presented the work virtually on Monday and Tuesday at the 2021 Society for Neuroscience Global Connectome.

One of the biggest hurdles for targeted gene therapy is getting enough treatment to the right spot. In the first study, researchers overcame this obstacle by developing stem cells that produce a therapeutic protein inside the brain.

The researchers had previously used modified stem cells to produce a protein that can activate the paternal copy of UBE3A. Transplanting the cells into the brains of Angelman syndrome model mice boosts levels of UBE3A protein, they found. However, the treatment required multiple direct injections into the animals’ brains.

In the new work, they instead tried injecting the cells into a pocket of cerebrospinal fluid at the base of the skull — an approach that is less invasive and can be performed multiple times. They compared the results with direct injection into the animals’ hippocampus. In both cases, the mice had UBE3A expression in the brain for up to three weeks.

Mice that received direct injection of the stem cells had fewer Angelman syndrome traits than controls, as measured by their motor skills.

This suggests that though the new route is effective, it may not provide a high enough dosage, says Peter Deng, a postdoctoral researcher in Kyle Fink‘s lab at the University of California, Davis, who presented the work. And because the transplanted cells produce protein for only a limited period of time, the effects are temporary — a limitation the team is addressing.

Deng and his colleagues also found that monkeys treated with the stem cells had the therapeutic protein throughout their brain and spinal cord three weeks after injection, which suggests the approach has potential for treating people.

The second approach presented at the conference improves the delivery of a more permanent form of gene therapy that uses adeno-associated viruses (AAVs).

Researchers typically inject these viruses directly into the brain, and the viruses usually only affect cells immediately surrounding the injection site.

“You’re required to use a ton of the virus” to penetrate the whole brain, says Jerzy Szablowski, assistant professor of neuroengineering at Rice University in Houston, Texas, who presented the work.

One potential workaround is to inject the AAV into the blood and use focused ultrasound to temporarily open up the blood-brain barrier, allowing the AAV to cross into the brain. Sometimes with this approach, however, the virus also inserts itself into other organs.

In their new work, the team developed AAVs that more easily cross the blood-brain barrier and more selectively target neurons than previous versions do. As a result, the new AAVs can be given in lower doses, reducing the amount of tissue affected outside the brain, Szablowski says.

To identify the most efficient AAV, Szablowski and his colleagues designed 2,100 new viruses, injected them all into the bloodstream of mice and applied focused ultrasound to the animals’ skulls. The mice had been engineered so that AAVs that successfully inserted themselves into a neuron got tagged with a marker. The team performed genomic sequencing on the mouse brains a few weeks later and read out the levels of viruses.

Compared with the previously most effective AAV, the top five newly identified AAVs targeted twice as many cells in the brain (including more neurons), and nearly half as many cells outside the brain, the researchers found.

The approach could be used to more efficiently deliver treatments for conditions such as Angelman syndrome or Parkinson’s disease, the team says.

A previous version of this conference report incorrectly represented some of Peter Deng’s findings.