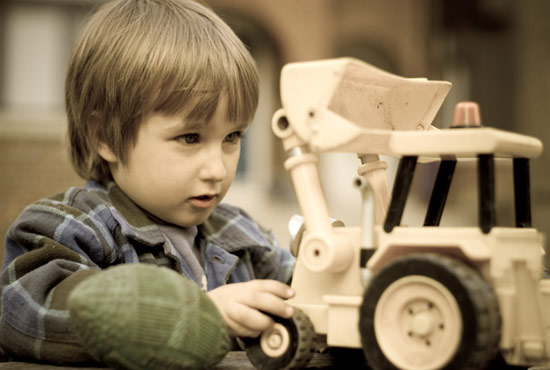 Object lesson: The intense focus on objects shown by youngsters with autism morphs into an obsessive interest in certain topics as language develops.

Social and communication deficits, two of the three core features of autism, have always received more than their share of researchers’ attention. But an emerging body of research is pointing to the early appearance and enduring importance of restricted interests and repetitive behaviors in the disorder.

Although some ritualistic and repetitive behaviors shown by people with autism are also present in those with attention deficit hyperactivity disorder, obsessive-compulsive disorder and schizophrenia, as well as in typical children early in development, the depth and persistence of these behaviors is one of the hallmarks of autism.

Repetitive movements and manipulation of objects are among the first signs of autism to emerge in toddlers1,2. Scores on tests of repetitive behavior at 2 years of age best predict autism at age 9, according to a 2006 study that has driven much of the new attention to these behaviors3.

These and other findings underlie the diagnostic criteria for autism proposed for the DSM-5, the edition of the Diagnostic and Statistical Manual of Mental Disorders set to be published in 2013, says James Bodfish, professor of psychiatry at the University of North Carolina.

“This is an example of the DSM process working, and making a change based on new research on the significance of repetitive behaviors in autism,” he says.

Still, a decades-long focus on social and communication deficits in individuals with the disorder has created a lopsided body of knowledge. Much less is known about repetitive motor movements, sensory sensitivities and circumscribed interests, for example, than about the role of joint attention in developing social skills in toddlers.

“There was an early and long-lasting bias to think about autism in terms of its social deficits,” Bodfish says. “Maybe that had to play out before people could find other things.”

The evolving focus on developing more accurate ways to measure restricted and repetitive behaviors and interests, understanding their function and charting the trajectory of these behaviors over the lifetime of the individual may ultimately help researchers develop more effective treatments.

Researchers have long associated repetitive motor movements such as hand-flapping with low cognitive function, and higher-order restricted behaviors, such as an intense focus on a particular object, with good language and cognitive abilities.

New research shows that repetitive motor movements are present across the spectrum, however — although males seem more affected in general than females4. Repetitive motor movements may be less noticeable in individuals with higher intelligence quotients and in females because they have more social awareness combined with a greater ability to inhibit those behaviors, say researchers.

A repeated movement “may be like a tic,” says Amy Wetherby, professor of communication science and disorders at Florida State University. “If you are together enough, you can hold it in for so long, whereas the lower-functioning individual can’t do that.”

Similarly, researchers have tended to assume that circumscribed interests — an intense focus on favorite topics — are less common in those with low cognitive abilities. But that assumption may reflect difficulties in measuring circumscribed interests in a nonverbal person, says Wetherby. “It’s a bit trickier to assess if they don’t have language.”

Wetherby’s research shows that repetitive movements in young children with autism gradually morph into repetitive thoughts and circumscribed interests as they learn to speak. “It comes out in language and conversation,” she says.

Clinicians and researchers once took for granted that rocking, ritual and restricted interests alleviate anxiety in individuals with autism, but an emerging direction of study points to a different explanation: These activities may be intrinsically rewarding for the individual.

Brain regions associated with reward and motivation appear to be turned on by favorite interests in individuals with autism — and completely unmoved by more typical sources of pleasure, such as money.

Imaging studies have shown that the brain’s reward network in people with autism responds to their objects of interest, such as trains or electronic devices, but not to money5.

The reward circuit is a new focus for autism research. Still, there are clear parallels with its role in other disorders, researchers say.

The reward circuitry is sluggish in people with depression and schizophrenia, and overly responsive in those addicted to drugs or alcohol. Evidence suggests that it is selectively over- or under-stimulated in autism, says Gabriel Dichter, assistant professor of psychiatry at the University of North Carolina.

In individuals with the disorder, social stimuli fail to activate the circuit early in life, and non-social stimuli send it into overdrive. This may rewire neural circuits to create a lifelong pattern in which the reward system responds more enthusiastically to objects than to people, he says.

“I hesitate to use the word addictive because it has negative connotations, but this neurocircuitry of reward [in people with autism] seems to be pathologically reactive to certain aspects of the environment,” Dichter says.

This new avenue of research has the potential to explain the apparently self-soothing aspect of restricted and repetitive behaviors that have long puzzled researchers — and also to suggest a new approach to treatment.

“If it has its own intrinsic rewarding value which is self-reinforcing, that has a very different treatment implication,” Dichter says. “We’re going to have to intervene with this overly motivated system.”

Treating these behaviors presents numerous challenges, not least the fact that many of them serve important functions for a person with autism. That realization is fairly recent, however. When she was being trained 30 years ago, they were thought of primarily as “problem behaviors that we wanted to be rid of,” says Wetherby.

Researchers and advocates agree that attempting to eradicate these behaviors, which can be important coping strategies, is unwise. “If the objective of an intervention is simply to reduce autistic traits, it is possible to do real harm to the individual,” says Ari Ne’emen, director of the Autistic Self-Advocacy Network, a Washington-based advocacy group that applies the principle of disability rights to autism.

A more productive approach to treatment would be to incorporate the behaviors in a teaching strategy — for example, setting up a classroom to minimize sensory overload or using an individual’s intensely focused interests to teach other skills.

Ne’emen, who is a member of the National Council on Disability, a federal agency that advises the U.S. president and Congress, and who has autism himself, points out that he works in public policy and politics, an arena that requires a considerable amount of social communication. Talking readily with other people and interacting socially were once very difficult for him, as they are for many people with autism, he says.

“Growing up, I struggled with those things immensely,” he says. “I would never have had occasion to learn those skills if not for the fact that my focused interest was public policy, which led me to join a model United Nations club in high school.”

The trick is figuring out a way to manage restricted and repetitive behaviors, so that rather than interfering with learning, they help promote it, says Wetherby. “Our aim is not to get rid of these behaviors but to exploit them to help the individual to maximize his or her potential.”