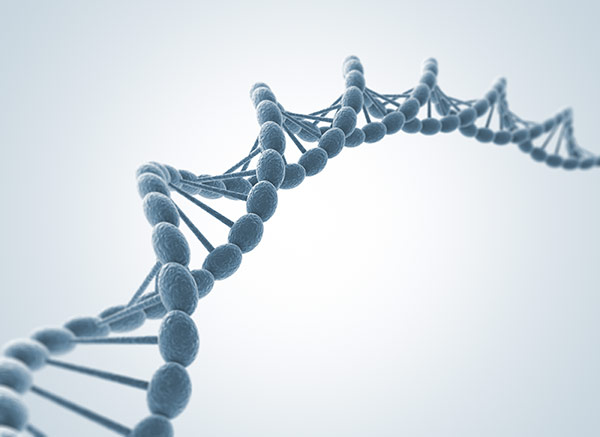 Jezper/Shutterstock.com Size matters: Many of the genes that MeCP2 keeps in check are more than five times longer than the typical gene.

Mutations in the gene responsible for Rett syndrome boost the expression of abnormally long genes in the brain. The findings, published 11 March in Nature, add to mounting evidence implicating long genes in developmental disorders1.

A 2013 study found that many genes linked to autism are three to four times longer than average2. The new study goes further, providing the first compelling evidence that the disruption of long genes may be the principal cause of a brain disorder.

“This paper is the first evidence that a mutation that’s affecting the regulation of long genes is actually at the heart of a disorder of human brain function,” says lead researcher Michael Greenberg, professor of neurobiology at Harvard Medical School. “This strongly indicates that it’s the misregulation of long genes that underlies Rett syndrome.”

The Rett syndrome gene is called MeCP2. Children with the syndrome — virtually all of whom are girls — produce either nonfunctional versions of or too little of the MeCP2 protein.

MeCP2 is known to regulate the activity of more than a thousand other genes, suppressing some and activating others. Greenberg and his team found that many of the genes MeCP2 keeps in check are more than 100 kilobases long, five times the length of a typical gene. They found these lengthy sequences are expressed in copious quantities in lab-grown human neurons missing the Rett syndrome gene, as well as in postmortem brain tissue from children with the syndrome.

The expression of each gene is enhanced by 3 to 10 percent, the researchers found, a change that sounds modest. But when the activity of hundreds of genes is altered in this way, the cumulative effect on the brain may be significant.

“This study suggests strongly that MeCP2 is actually having a subtle but significant effect on large numbers of genes, in particular genes that are very long,” says Adrian Bird, professor of genetics at the University of Edinburgh in Scotland, who was not involved in the new study. “I think we’re getting a more sophisticated view of what MeCP2 does as a result of these experiments.”

MeCP2 normally binds to patches of DNA that sport chemical tags called methyl groups. These tags act as volume knobs, dialing gene expression up or down.

Previous studies revealed that MeCP2 tends to stick to a methylated site called mCG. Greenberg and his team discovered that MeCP2 also binds to mCA, a different type of methylated site. They also found that long genes have more of these mCA sites than short genes do. This may explain why MeCP2 seems to primarily regulate the expression of long genes.

“It’s a really nice finding, and I think it adds a lot to the field,” says Mark Zylka, associate professor of cell biology and physiology at the University of North Carolina, Chapel Hill. Zylka led the 2013 study on long genes in autism but was not involved in the new work. “[The researchers] provide one of the first mechanistic explanations for why a long gene behaves differently than a short gene,” he says.

The researchers speculate that MeCP2 acts as a molecular speed bump. By binding to mCA sites on DNA, it could slow down the transcription of long genes, the first step in building a protein. Individuals with MeCP2 mutations lack these speed bumps. As a result, proteins from long genes are produced in abundance.Many of these long genes play crucial roles in the developing brain, such as helping to form connections between neurons.

Blocking the activity of enzymes called topoisomerases is known to dampen the expression of long genes in the brain.Topotecan, a cancer drug that inhibits topoisomerases, has shown promise in mice as a treatment for Angelman syndrome, an autism-related disorder characterized by impaired speech and seizures. Greenberg and his team tested topotecan in cultured mouse neurons that lack MeCP2.

Delivering a low dose of the drug for seven days to the cells normalizes the expression of many of their long genes. The result suggests that the overproduction of proteins from these genes in Rett syndrome is reversible.

Topotecan may not be suitable for people with Rett syndrome: It can cause serious side effects, such as increased susceptibility to infections. But the findings raise the possibility that drugs that dampen long-gene expression may be effective treatments for the disorder.