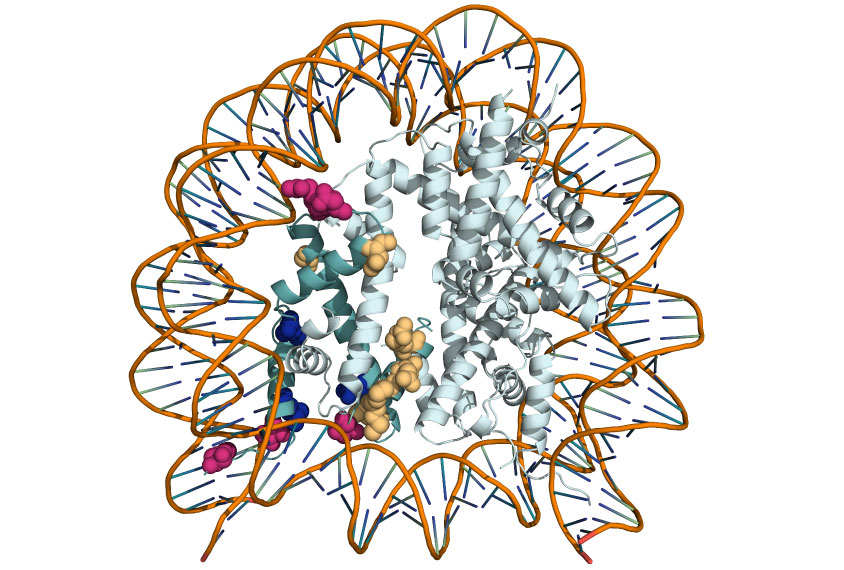 Spool party: Mutations that alter the structure of a protein that wraps up DNA strands can disrupt gene expression.

Mutations that affect a histone called H3.3 can lead to a neurodegenerative condition marked by developmental delay and congenital anomalies, according to a new study.

Histones act as spools for DNA, making it possible to pack the strands of genetic material tightly within the nucleus. They also serve as gatekeepers for protein production, physically blocking proteins from interacting with genes, or allowing them access to turn genes on and off. Autism has been tied to mutations in proteins that modify histones and disrupt this gatekeeping process.

The new work is among the first to link atypical neurodevelopment and degeneration to mutations that affect a histone itself. It focuses on 46 people with a mutation in either of two genes that code for H3.3. All have a diagnosis of developmental delay. Many also have other medical conditions, such as seizures, heart defects and atypical development of the head and face.

“We see this [result] as a Rosetta Stone,” says lead researcher Elizabeth Bhoj, assistant professor of pediatrics and human genetics at the University of Pennsylvania. In addition to providing information about this particular cohort, the findings could help explain the role that histones play in neurodevelopmental conditions in general, she says.

Earlier studies have associated H3.3 with cancer, but none of the participants in the new study have tumors. About 21 percent, however, show signs of neurodegeneration, and 26 percent have shrinkage in the cerebral cortex, the brain’s outer layer, suggesting the condition may be progressive.

“It’s an impressive collection of novel mutations that seem to be converging on a set of clinical features,” says James Noonan, associate professor of genetics and neuroscience at Yale School of Medicine, who was not involved in the study.

Bhoj and 131 colleagues across 88 institutions amassed the cohort using GeneMatcher — a site that enables researchers and clinicians to compare cases of genetic variants — and also by word of mouth at conference presentations.

“It was more important to take the risk of being scooped for publication and get the information out there,” Bhoj says.

The participants, who range from 2 months to 32 years in age, had all had their DNA sequenced previously. The researchers analyzed those sequences and found 37 distinct mutations that affect the histone’s structure in different ways. But the location of a mutation in either gene did not relate to the person’s traits, the team found.

Bhoj and her colleagues developed a computational model to simulate how mutations that change H3.3’s structure alter its interactions with other proteins and DNA.

Some appear to blunt the histone’s ability to interact with autism-linked proteins, such as those encoded by SETD2 and ZMYND11. Others may disrupt gene expression by loosening the histone’s grip on DNA, a process implicated in some forms of autism.

The findings were published in Science Advances in December.

A zebrafish model of the condition has craniofacial abnormalities similar to those seen in people with H3.3 mutations, the team found. These differences may arise because of atypical development of neural crest cells — stem cells that eventually become face cartilage, bone, heart muscles, peripheral nerves, neurons and glia.

When Bhoj and her colleagues analyzed gene expression patterns in skin cells from the people in the cohort, they found that genes associated with cell division were more highly expressed in these cells than were those from age- and ethnicity-matched controls. The cells also grew and divided at faster rates.

But people with the condition are not known to have atypical skin cells, Noonan says. Studying how the mutations affect neural crest cells would be more biologically relevant, he says.

Because the participants’ traits appear to become more severe with age, “there is a greater sense of urgency to find a treatment,” says study investigator Wendy Chung, professor of pediatrics and medicine at Columbia University. (Chung is also director of clinical research at the Simons Foundation Autism Research Initiative, which is, like Spectrum, funded by the Simons Foundation.)

Research into new therapeutics may be able to “piggy-back” off of work that has explored H3.3’s role in cancer, Bhoj says.

But treating a mutation that disrupts the structure of H3.3 in multiple ways is a challenge, Noonan says. In the future, a gene-editing tool such as CRISPR may be able to help, he says.

In the meantime, the findings make a diagnosis possible for people with this condition, says Gijs van Haaften, associate professor of genetics at the University Medical Center Utrecht in the Netherlands, who was not involved in the study.

Bhoj and her colleagues next plan to study shared pathways between the different mutations to understand the mechanisms behind the condition.