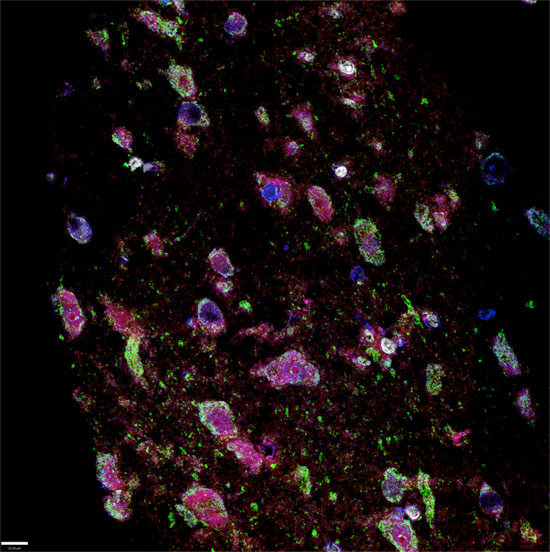 A gene that regulates the conversion of testosterone to estrogen in the brain could help explain why males are more susceptible to autism than females, according to a study published in PLoS One in February1.

The researchers linked the gene, RORA, to autism last year, when it turned up in a study of epigenetic effects in identical twins, only one of whom has autism, and their unaffected siblings2.

RORA also activates other genes, some of them key players in neurodevelopment and in maintaining circadian rhythm, which is thought to be disrupted in people with autism.

In the new study, the researchers showed that cultured neurons exposed to estrogen respond by producing more RORA. Treating the cells with testosterone has the opposite effect. RORA also seems to regulate aromatase, an enzyme that converts testosterone to estrogen in the brain.

The powerful interaction between RORA and sex steroids suggests a molecular explanation for the higher rates of autism in boys, says lead investigator Valerie Hu, professor of biochemistry and molecular biology at George Washington University.

When a mutation in RORA lowers its levels, aromatase levels also drop, and testosterone cannot be converted to estrogen. This is less of a problem in females, who have abundant amounts of estrogen on their own. In males, however, RORA mutations could lead to a build up of testosterone in utero.

Because the estrogen receptor turns on and off some of the same genes as RORA does, females are also better able to compensate for RORA’s loss.

The findings also fit comfortably with the androgen theory of autism proposed by Simon Baron-Cohen, professor of developmental psychopathology at the University of Cambridge in the U.K. His theory posits that autism represents an extreme variant of the systemizing ‘male’ brain, perhaps due to over-exposure to testosterone in utero3.

“The paper is potentially very relevant to the androgen theory of autism,” Baron-Cohen says. “It identifies a candidate gene that affects expression of the sex steroid hormones, both estrogen and testosterone, via the enzyme aromatase.”

Still, he says, “We need more studies into the sex steroid hormones in autism, so it is too soon to understand precisely where in this pathway there are abnormalities.”

Because estrogen enhances RORA expression, and because women naturally have more working estrogen receptors, females may be less vulnerable than males are to low levels of RORA.

“Estrogen cannot only raise the levels of RORA acting through the estrogen receptor, it can also turn on some of the same genes that RORA turns on, taking up some of the slack,” Hu says.

Hu first encountered RORA in a 2009 study of breast cancer which found that RORA significantly increases the expression of aromatase in breast tissue4.

Soon after, Hu began working on autism, partly because she has a son affected by the disorder. RORA cropped up as a candidate gene in a large-scale gene expression analysis by her team, and then in a study of methylation — the addition of a methyl group to a protein — which turns a gene on or off.

Comparing genes that are expressed differently in autism with those that are methylated, one of her students noticed that RORA was on both lists. When she suggested investigating it as a candidate gene in autism, “I thought she was barking up the wrong tree,” says Hu.

But the more she learned about RORA, Hu says, the more intrigued she became. Mice lacking the RORA gene, dubbed ‘staggerer mice,’ have difficulty walking because of abnormal development of the cerebellum, a brain region that plays an important role in attention and language, as well as motor control.

In 2010, another team, led by Flavio Keller, reported that increasing estrogen levels in male staggerer mice reverses their social and cognitive deficits6.

“It also underscores the importance of the approach that some geneticists are presently taking in their search for candidate genes,” he says.

Keller cautions, however, that the new study is based on results in cultured neurons. “It remains to be seen if androgens and estrogens modulate RORA in normal neurons, specifically in the cerebellum,” he says.

The gene is involved in other key functions relevant to autism. For example, a 2006 study reported that RORA protects neurons from oxidative stress7 — the build-up of harmful molecules called free radicals — and inflammation.

RORA also helps maintain circadian rhythm and regulates sleep cycles, which a growing body of research suggests may be disrupted in people with autism.

“We did an analysis of the network of circadian genes and found that a lot of the functions and disorders associated with this network pertain to autism,” Hu says.

She notes that because RORA is a transcription factor, it has an impact on many other genes, at least 300 by her count. That makes it a particularly compelling candidate gene for autism, she says.

“Because so many functions are affected in autism, it has to be something with a very large impact.”