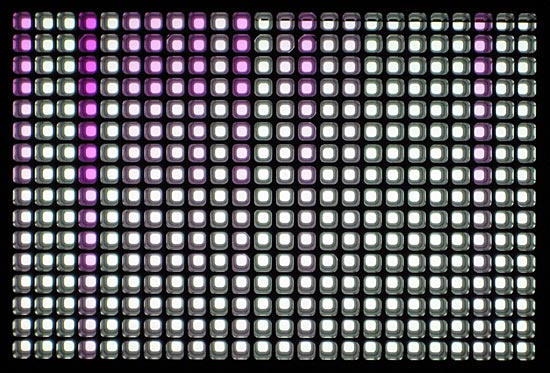 A new molecular screen allows researchers to determine for the first time the precise amounts of FMRP protein, whose absence in the brain causes fragile X syndrome.

The technique, described in the Journal of Molecular Diagnostics1, could predict the extent of cognitive impairment seen in fragile X syndrome, the most common single-gene cause of autism.

“If we understand the variations in this protein level and how they affect fragile X, I think the same thing can also go for protein expression levels in other [cognitive] disorders as well,” says lead investigator Paul Hagerman, professor of biochemistry and molecular medicine at the University of California, Davis.

Fragile X syndrome is triggered by too many repeated nucleotides in the FMR1 gene, which codes for FMRP, or fragile X mental retardation protein. People with the repeats make little to no FMRP: the more repeats, the less the amount of FMRP made. Those with the full mutation have at least 200 repeats, but even those with a pre-mutation — 55 to 200 repeats — have subtle learning and memory problems, or social anxiety. The amount of protein varies widely among people with fragile X syndrome, and no one knows how the protein’s quantity affects the course of the syndrome. 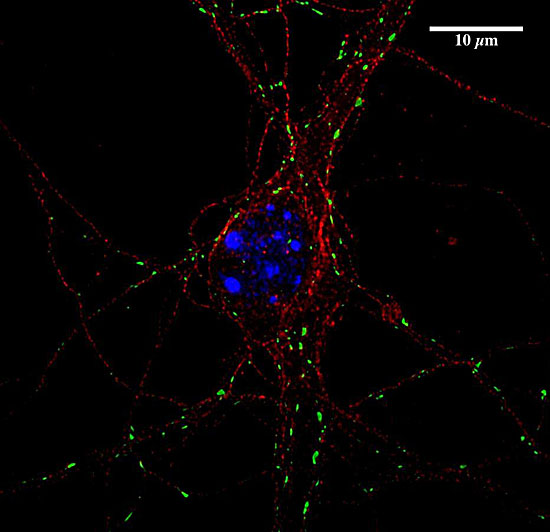 Y. Chen, I. Pessah
Critical loss: Absence of FMRP protein (in red, above) in the brain causes fragile X syndrome. The new blood test, which can accurately quantify minute amounts of protein, is simple and inexpensive enough to be used on a large scale, Hagerman says. Some researchers predict that it will help explain the clinical variability associated with the syndrome.

“I think [the method] will have a lot of implications for understanding exactly how much deficiency in FMRP one has to have in order to start exhibiting symptoms of the syndrome,” says David Bloom, professor of molecular genetics and microbiology at the University of Florida College of Medicine in Gainesville, who was not involved with the work. “That’s something that’s really been lacking.”

“If you can associate a protein level with [a clinical] outcome, then you have a way of predicting who may benefit from targeted therapies,” he adds.

Clinicians have so far used standard DNA analyses to diagnose fragile X syndrome, but the screens only reveal the underlying genetic code, not how the code is expressed into proteins.

A few studies have provided crude estimates of protein levels by using cellular staining methods. For example, some researchers stain blood cells or hair follicles, and calculate the proportion of cells that contain FMRP2,3.

These reports hint that the less the amount of FMRP produced, the more severe are the clinical symptoms, such as lower intelligence quotient, impaired short-term memory, abnormal patterns of brain activity during cognitive tasks, and a lesser ability to pay attention.

Still, these qualitative measures of FMRP can spot only the complete absence of protein in children who have extensive DNA repeats. It is more difficult to measure protein levels in children who have milder mutations and produce some FMRP, says Hagerman. “That’s the ceiling effect — once you get to the point where most of the cells are staining, you can’t say anything about protein levels,” he adds.

For about ten years, researchers have tried to design a more quantitative test for FMRP. In their study, Hagerman and his colleagues used a technique called ELISA — for ‘enzyme-linked immunosorbent assay’ — that has been used for decades to measure proteins. The technique involves incubating all of the proteins extracted from blood cells with two types of antibodies. One helps researchers isolate FMRP from the other proteins in the sample; the other is linked to a protein that colors the FMRP complex. Using a light-sensitive meter, the researchers then directly measure the amount of FMRP in the sample.

Previous iterations of the ELISA technique never panned out, partly because the antibodies researchers harvested — by injecting human FMRP into rabbits, mice and other mammals — don’t sufficiently bind to FMRP. 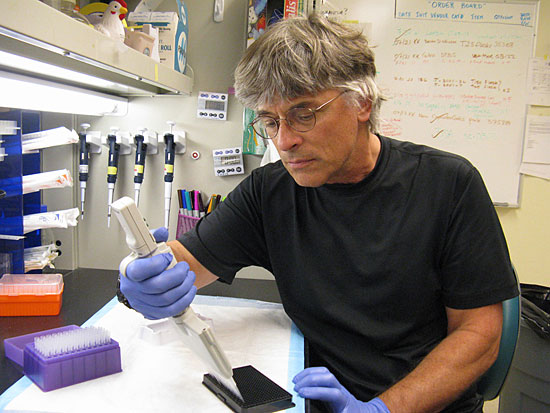 C. Iwahashi
Normal variation: Paul Hagerman next plans to study differences in FMRP levels in healthy people. Hagerman’s group instead tried chicken antibodies, which turn out to have two advantages over the other kinds. “One is that you can get boatloads of antibodies from the chicken and, second, they tend to make strong antibodies against mammalian [proteins].”

Using blood samples taken from 6 people with fragile X syndrome and 15 healthy controls, Hagerman’s team showed that FMRP ELISA can be used to quantify protein levels as low as one percent of those seen in controls.

The researchers also found that compared with people who have the mosaic mutation — extensive repeats in some cells and fewer in others — those with the full mutation tend to make less protein. But because of the small sample size, this trend is not statistically significant.

To test the reliability of the assay, the scientists analyzed three samples taken from two participants over an 11-month span. The results varied less than two percent for each person.

According to ongoing studies in Hagerman’s lab, FMRP levels vary even among healthy people. He plans to use the new ELISA assay to study these variations in people with autism as well as in the normal population.

More studies will be needed to determine the ultimate clinical utility of the test, Hagerman says. For example, Elizabeth Berry-Kravis has proposed using the test to correlate levels of FMRP with specific brain imaging patterns or learning deficits seen in the syndrome.

“I’m sure that the test will be used for many projects,” says Berry-Kravis, associate professor of pediatrics, neurology and biochemistry at RUSH-Presbyterian-St. Luke’s Medical Center in Chicago. “It’s just a more sensitive technique than what we have now.”