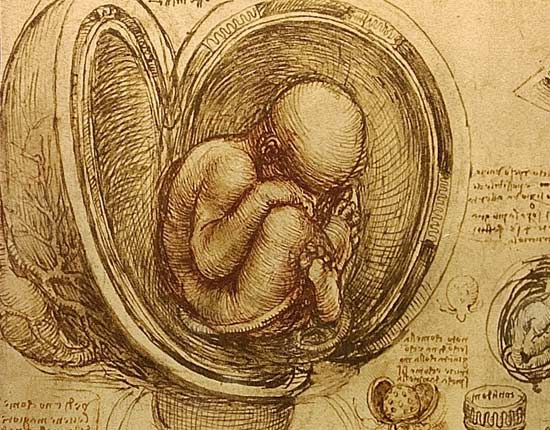 From the womb: People with high-functioning autism carry variations in genes important for hormone function, which may thwart brain development in utero.

A team of British researchers has garnered some of the first genetic evidence supporting their theory that sex hormones play a role in the development of autism.

In a study published online in July in Autism Research, the team screened more than 500 adults for aberrations in dozens of hand-picked genes — each of which had been loosely linked to autism or autism-related processes in previous studies. The scientists found that 27 genes harbor slight variations in people who score high on tests for autism-related traits, and 10 of these genes are important for hormone function1.

Lead investigator Simon Baron-Cohen says that, taken with non-genetic studies, the new findings bolster his ‘fetal androgen’ theory of autism, which asserts that autism-related traits stem, at least in part, from exposure to excess testosterone in the womb.

“I don’t want to suggest that these are the only relevant genes or relevant pathways,” says Baron-Cohen, professor of developmental psychopathology at the University of Cambridge. Still, “there is converging evidence for sex steroid hormones being dysregulated in autism.”

For instance, in a paper published in February, his group reported a link between high fetal testosterone levels and autism-related traits in the general population2. Before that, the team found that testosterone-related medical conditions — such as polycystic ovary syndrome — are more common in women with Asperger syndrome3, a high-functioning form of autism.

So far, however, genetic support for the theory has been scant. A few papers by other groups have found potential ties between autism and hormone synthesis4 or androgen receptor genes5, but these studies were small or difficult to interpret.

A role for sex steroid–related genes in autism is consistent with the preponderance of males affected by the condition, notes Arthur Beaudet, chair of molecular and human genetics at Baylor College of Medicine, who was not involved in the study.

Even so, Beaudet says that before accepting that these particular genes are involved, it will be important to test them in a follow-up study, preferably looking at a larger group of people. It might also be interesting to screen genes on sex chromosomes to try to understand why autism is more common in males, he adds, because the new study focused solely on autosomal genes found on the non-sex chromosomes.

Perhaps more troubling, the new report only examined common genetic changes that are used as markers for other genetic effects, says Thomas Südhof, professor of molecular and cellular physiology at Stanford University. The data therefore do not show what sorts of mutations, if any, are present in the genes. He says the next step will be to look for changes in the number of copies of each candidate risk gene, or to fully sequence the genes to look for disease-specific mutations.

“In the end, you have to find a mutation,” Südhof says. “There is no shortcut.”

Interested in pathways that could plausibly be perturbed in autism, Baron-Cohen’s team focused on 68 genes related to neural connectivity, social-emotional perception and response, and sex steroid synthesis and transport. Within these genes, they specifically assessed 216 single-nucleotide polymorphisms (SNPs) — relatively common genetic changes that affect a single letter of the genetic code.

In one arm of the study, the researchers screened 349 healthy people, investigating whether the presence of these SNPs is related to scores on behavioral tests that measure empathy and other autism-related traits.

The team also looked at the prevalence of the same SNPs in 174 people with non-severe autism or Asperger’s syndrome. They selected high-functioning individuals to avoid co-morbidities such as language deficits or learning delays that could confound genetic data.

Altogether, the researchers detected 27 genes that were somewhat more common in people with either autism-related traits or autism, including 10 related to sex hormones, 8 to neural connectivity, and 9 to social or emotional behavior.

After applying statistical corrections accounting for the number of genetic changes and outcomes tested, the team was left with 11 significantly associated candidate genes, including 3 from sex hormone synthesis or metabolism pathways.

Even so, Baron-Cohen believes all 27 nominally significant genes are plausible candidates for future research. Because the study was larger than a typical candidate gene study but much smaller than a genome-wide association study, he explains, the team was charting new territory with respect to determining which associations were statistically significant.

“This is really a statistical frontier that remains to be explored,” says study co-investigator Bhismadev Chakrabarti, who did the research as a postdoctoral researcher in Baron-Cohen’s lab and is now a lecturer in psychology at the University of Reading.

“The genes that they looked at are highly interesting,” adds Hakon Hakonarson, director of the Center for Applied Genomics at the Children’s Hospital of Philadelphia, who was not involved in the research. “We all believe that these genes may be important in autism.”

Hakonarson calls the paper a “nice, well-done study.” But, like Beaudet, he’d like to see the results replicated in a larger sample. For instance, he suggests it may be useful to look at the same genetic markers in data collected for large genome-wide association studies of autism.

Hakonarson says it could be argued that if sex hormone genes were crucial for autism, they would already have turned up in genome-wide association studies of the disorder. On the other hand, it’s also possible that these studies haven’t been large enough to see the effect of these particular genes, he says.

Baron-Cohen says he hopes the study will help convince others that seemingly divergent branches of autism research — such as those focusing on neural connectivity, sex hormone function and social perception — are actually related to and compatible with one another. For example, because sex hormones seem to influence how neurons connect6, hormones could conceivably affect the various neural growth and connectivity deficits suggested by neuroimaging studies of autism, he says.

“I do think that there are connections between these conditions,” Beaudet says, adding that he believes there is value in looking at different aspects of autism in a coordinated way.

Although many experts agree that the findings are plausible, not everyone is convinced of the strength of the current data. “At this level of analysis, you can find whatever you want,” Südhof says, arguing that the study is too small and biased in its selection of genes. That doesn’t mean the genes identified in this study aren’t involved in autism, he adds, but the apparent effect of each gene on autism risk is small, making it difficult to draw firm conclusions.

Down the road, Baron-Cohen’s team plans to see whether the same genetic variants are associated with low-functioning autism cases. Chakrabarti also intends to do molecular biology studies to see whether the SNPs are linked to gene expression changes in the brains of individuals with autism, using post-mortem brain tissue. In so doing, they hope to find evidence that reinforces and builds on the genetic clues they’ve uncovered so far.