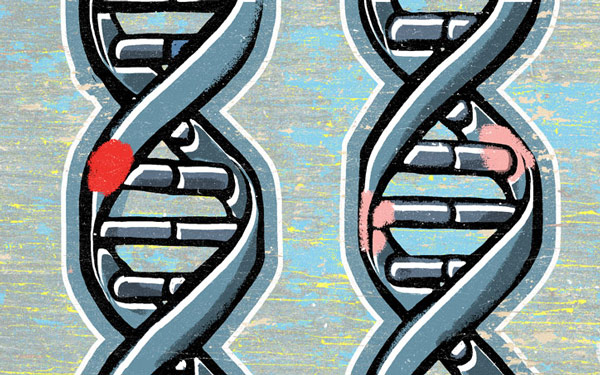 Alberto Ruggieri Common conundrum: Genetic glitches that are present in at least 5 percent of the population are thought to contribute half of the genetic risk for autism.

A statistical trick can help researchers home in on subtle genetic blips that contribute to autism, researchers reported Saturday at the 2015 International Meeting for Autism Research in Salt Lake City, Utah. These small alterations in the genome, called common variants, are thought to confer half of the genetic risk for autism.

Despite their significance, individual common variants tied to autism are elusive. Each one is present in at least 5 percent of the population. This means that researchers would need DNA from tens of thousands of people with autism to find variants that pass the threshold of statistical significance to link them to autism.

But there is still valuable information to mine within smaller studies, says Lea Davis, research associate at the University of Chicago’s Conte Center.

In prior work, Davis and her team analyzed data from a study that identified common variants associated with autism in 1,558 families1. Among those that neared statistical significance, her team looked for variants, called expression quantitative trait locis (eQTLs), that regulate the expression of other genes2. These variants are usually distant from the gene they control — sometimes on another chromosome.

The researchers used databases to identify the eQTLs that are tenuously tied to autism and homed in on those that regulate genes in the brain but not in the blood. This step boosts the likelihood that the variants are relevant to autism, says Davis.

In new work presented Saturday, Davis used these eQTLs to link common variants to autism in a group of 5,171 people. To associate genes with autism, she and her colleagues looked at variants in more than 13,000 genes as well as all the brain-based eQTLs that regulate those genes.

With this extra step, three genes passed the threshold of statistical significance for autism relevance. These include ITGF1, which is involved in stem cell differentiation, MTHFD2, which is expressed in mitochondria, and ZNF2, which has no known function but is thought to help regulate other genes.

The researchers plan to follow up on these genes, in hopes of identifying more common variants that play a role in similar pathways.