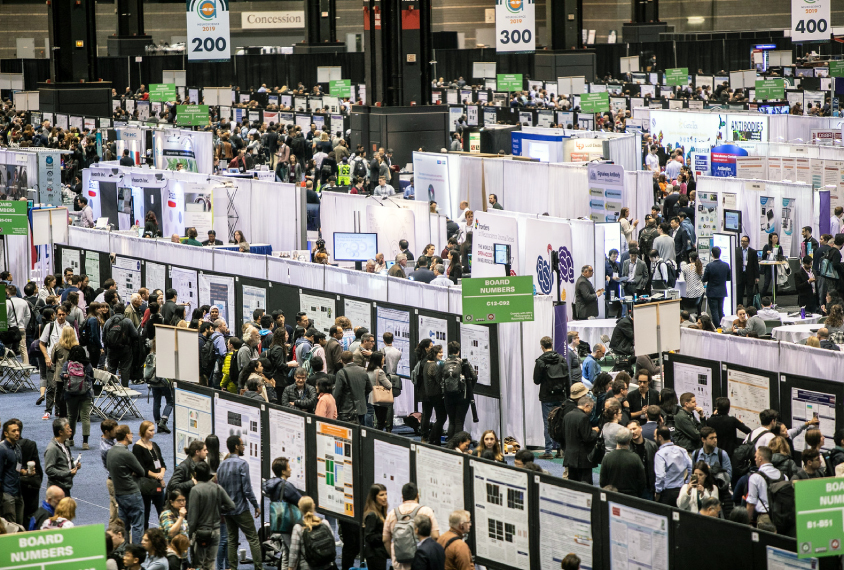 Face time: Some scientists say the Society for Neuroscience should downsize its meeting to lower its carbon footprint.

courtesy of Society for Neuroscience

Most neuroscientists accept the scientific consensus on climate change and may even be doing their part to keep it in check — perhaps adjusting their diets or buying electric cars.

But that’s not enough, says Adam Aron, professor of psychology at the University of California, San Diego. Aron says he would like his fellow scientists to take bolder action than that. In November, he and seven other organizers drafted a petition to the Council of the Society for Neuroscience (SfN), demanding significant and immediate cuts in carbon emissions associated with its annual meeting.

More than 1,200 current and former SfN members have signed the petition.

SfN’s annual meeting in the United States draws close to 30,000 researchers, postdoctoral fellows and graduate students from around the world. The petitioners’ core demand is for the meeting to be much smaller, with far more people attending virtually rather than flying in from afar. The petition organizers have also posted a call for neuroscientists to individually decrease their carbon footprints.

“We want to see that SfN significantly decarbonizes the annual meeting via solutions that allow us to continue to participate and to build our community,” they wrote.

SfN leaders declined to comment to Spectrum about how they plan to respond to the petition.

Barry Everitt, president of SfN, informally promised Aron via email that a more extensive effort to lower the meeting’s carbon footprint would be in place by 2021.

SfN’s executive director, Marty Saggese, has pointed petition organizers to a page on the organization’s website that says the 2020 meeting will be held in an environmentally friendly building and will use recycled paper and plastic.

The organization also encourages attendees to purchase carbon offsets for their travel, a strategy Aron says is insufficient. “Do something meaningful and [don’t] throw offsets back in our faces,” he says. “Seriously countenance reducing the physical size of the meeting or making it more infrequent.”

This is not the first time SfN members have made a request to the council to cut its carbon footprint. In 2016, a group of leading scientists — including Nobel Prize winner Linda Buck — requested that SfN host its meeting every other year, rather than annually, as a way to cut carbon emissions.

Their letter estimated that if the average attendee travels 3,000 miles to and from the meeting, the carbon dioxide emissions total 36 million pounds.

The council unanimously rejected the request.

“Year after year, neuroscientists demonstrate that coming together to share their discoveries is important to the field and their careers in it,” then-SfN President Hollis Cline wrote in her response.

The meetings also garner some income for the organization. According to public tax filings, SfN earned nearly $5 million from its 2017 annual meeting, the most recent year for which records are available. That year, SfN’s overall income was $1.5 million, suggesting that the meeting helps offset the organization’s costs.

SfN already allows citizens of countries that are on the U.S. no-fly list, or people who have visa concerns, to present their work virtually.

“Extend that program to everyone who can’t or doesn’t want to travel for any reason, including climate reasons,” says Florian Sandhäger, a neuroscientist at the University of Tübingen in Germany, who signed the petition.

Some researchers say virtual meetings can deliver the same value as the in-person gathering.

“I work remotely a lot,” says Alex Leighton, a neuroscientist and SfN exhibitor for the software company Open Ephys in Lisbon, Portugal, who has signed the petition. “I really understand how, at first, people can be apprehensive. We all need to acknowledge together that maybe this is something we find difficult, but that doesn’t mean we can’t learn it,” she says.

If the majority of neuroscientists vow to stop attending SfN’s annual meeting in an effort to lower the carbon footprint, that might prompt the organization to shift to virtual meetings, Aron says. He has already made his pledge: The 2019 SfN meeting was “the last time I am going to travel there, by plane, probably in my life.”