‘Neurons on a chip’ reveal patterns across autism-linked conditions 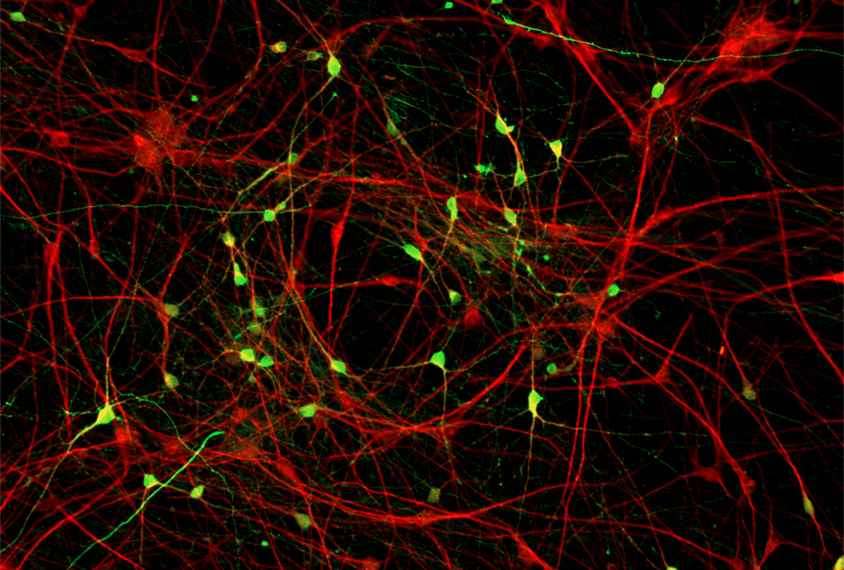 Neurons that carry autism-linked gene mutations show distinct patterns of activity that correlate with the traits those mutations engender in people, according to new unpublished work.

The research was presented virtually last week at the 2021 International Society for Autism Research annual meeting. (Links to abstracts may work only for registered conference attendees.)

The findings suggest that evidence of the traits shared among people with different genetic subtypes of autism may be visible at the level of network activity — adding a layer of information to the molecular-level effects caused by genes.

“The [neuronal] network is actually what you can see just beneath behavior,” says lead investigator Nael Nadif Kasri, associate professor of human genetics at Radboud University in Nijmegen, the Netherlands.

The researchers grew cultures of neurons carrying different autism-associated mutations in ‘smart dishes’ fitted with electrodes to detect the signals that brain cells use to communicate. The electrodes yield readouts of cell signaling from neuronal networks — ‘bursts’ of cells firing synchronously throughout network, as well as other scattered bouts of activity — which the team compared across different cell lines.

Mutations in genes associated with epilepsy — such as SCN1A and ANK2 — gave rise to neuronal networks with unusually high levels of scattered activity.

On the other hand, the gene mutation in EHMT1 that causes Kleefstra syndrome, which is characterized by intellectual disability and often accompanied by autism, resulted in longer bursts of activity than those seen in the other conditions.

“You start to see some clustering in types of [activity] patterns,” Nadif Kasri says.

Nadif Kasri and his colleagues reprogrammed skin-cell samples from people with autism-linked mutations, as well as from 10 people without autism, to develop into excitatory and inhibitory neurons.

Networks of cells grown from controls produced similar patterns of activity regardless of the age or sex of the donor, the team found: short bursts of signaling at regular intervals.

In a previous study, the researchers determined that neuronal networks of cells with a mutation in the gene EHMT1 have longer signaling bursts and more irregular activity than cell networks from controls.

An imbalance in the number of inhibitory and excitatory connections among the cells caused these atypical patterns, the team reported in their new work.

They also grew networks of cells from people with additional autism-linked mutations, as well as from cells that had been CRISPR-edited to carry these same mutations.

In both cases, the cell lines that carried different autism-linked mutations gave rise to distinct patterns of network activity, the team found. But similarities emerged among mutations that result in conditions with related phenotypes.

Mutations in SCN1A and ANK2 both gave rise to neuronal networks that were overly active compared with the typical network bursts seen in control cell lines.

And cells from people with mutations in KMT2D, which results in Kabuki syndrome, showed similar patterns of activity to the EHMT1 cells. Kabuki syndrome often results in intellectual disability but is not typically linked to autism.

Cells that carry mutations in ARID1B showed a distinct pattern of network activity, with short, small bursts occurring at an unusually high rate.

Moving forward, Nadif Kasri and his colleagues plan to test other genes that increase a person’s likelihood of being autistic. They also plan to explore how these activity patterns compare at the individual level, and how they relate to other autism-linked traits, he says.

The power of the technique lies in being able to do it “on a massive scale,” Nadif Kasri says.