Neurexins present only in select neurons 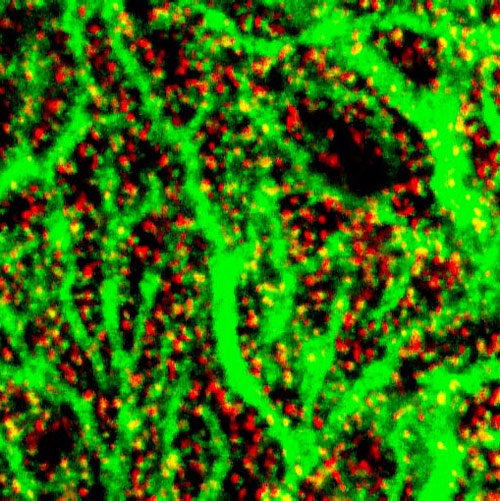 Location, location: Neurexin’s presence at the junctions between neurons changes throughout development, and is different in excitatory neurons than in inhibitory neurons.

Location, location: Neurexin’s presence at the junctions between neurons changes throughout development, and is different in excitatory neurons than in inhibitory neurons.

Neurexins, autism-linked proteins that organize synapses, the junctions between neurons, function in only a subset of cells in the brain, according to data presented in a poster Monday at the 2011 Society for Neuroscience annual meeting in Washington, D.C.

Neurexin localization changes throughout development, and shows different patterns in excitatory neurons than in inhibitory neurons, the study found.

“The idea [was] that neurexins are usually present at every synapse, so we were quite surprised,” says Marco Sassoe-Pognetto, associate professor of human anatomy at the University of Torino in Italy.

Several studies have linked mutations in neurexins, in particular neurexin 1, to autism.

Neurexins sit at the signal-transmitting ends of synapses and bind to molecules at the receiving branches of adjacent neurons. These binding partners include the autism candidates neuroligins.

The researchers looked at neurexins in the mouse brain using an optimized antibody that recognizes the entire protein family. Most studies rely on inducing cells to express neurexins tagged with a bulky fluorescent molecule. But antibodies are less likely to disrupt the protein’s usual interactions, says Giula Pregno, a graduate student in Sassoe-Pognetto’s laboratory.

To parse out neurexin’s localization in the cerebellum, a brain region involved in motor function and attention, the researchers looked at both neurexin and its partners in excitatory and inhibitory neurons.

In juvenile mice, the synapses of inhibitory neurons that express the chemical messenger gamma-aminobutyric acid express significant amounts of neurexin, the study found. But in adult mice, these synapses no longer express any neurexin.

“Neurexin could be involved in the maturation of synapses but not really necessary for maintenance. Or it could be replaced by another molecule,” says Sassoe-Pognetto.

Neurexins are also localized to the synapses of ‘parallel,’ but not ‘climbing,’ Purkinje cells, which are two classes of excitatory neurons in the cerebellum.

One shortcoming of the study is that it can’t discriminate among the different types of neurexins, notes Davide Comoletti, assistant professor of neuroscience at the Robert Wood Johnson Medical School in New Jersey, who was not involved in the work.

Still, says Comoletti, the study “dissects the expression patterns of neurexins at the cellular level and over time, adding useful details to our knowledge of the pathogenesis of autism.”