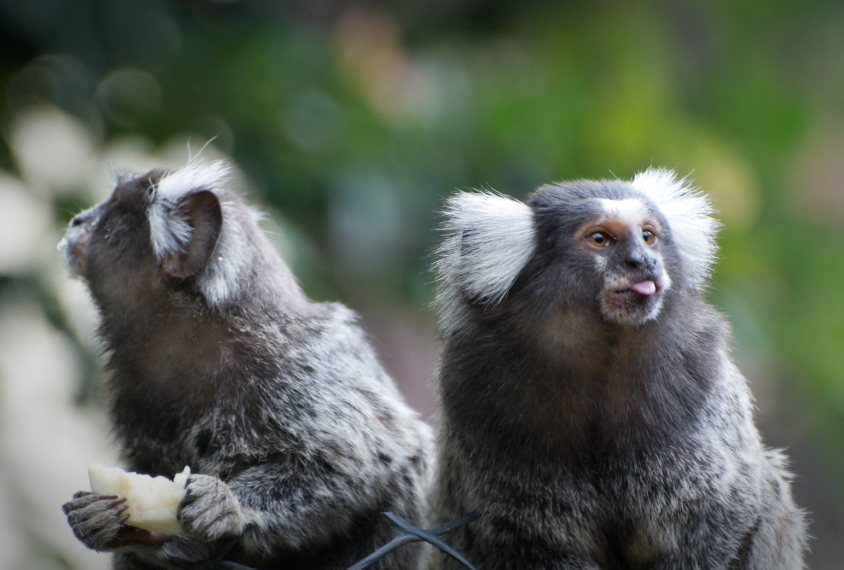 Sibling rivalry: Marmosets share some microglia with their birthmates, a trait that may make them well suited to studies of autism-linked variants.

Newly discovered aspects of cells in the marmoset brain may make the animals even more useful for autism research than they already are, according to two unpublished studies presented yesterday at Neuroscience 2022 in San Diego, California. These small monkeys, which mimic human social behavior more closely than rodents can, have become a popular model for studying genetic conditions related to autism.

Marmosets, one of the studies shows, are naturally chimeric: The animals carry cells from another animal — in this case, immune cells called microglia from their birth siblings. Because this chimerism arises naturally during prenatal development, the marmosets do not reject the foreign cells.

“We try to do chimeric models in mice all the time, but we get it for free in marmosets,” says study investigator Ricardo del Rosario, a computational biologist at the Broad Institute in Cambridge, Massachusetts, who presented the findings.

Born as twins or triplets, marmosets share blood circulation and exchange blood stem cells in the womb. Some of these cells end up differentiating into microglia that ultimately make a permanent home in one another’s brains.

Microglia and other cells in the brains of autistic people tend to have dysregulated gene expression, according to research published earlier this month. And microglia are thought to play a crucial role in pruning synapses during early brain development, supporting typical connectivity among neurons.

Much of a marmoset’s microglia bear that animal’s own genetic signature, but anywhere from 20 to 52 percent can come from a sibling, RNA sequencing on 137 brain tissue samples from 11 different marmosets showed.

This characteristic could make the marmoset a strong model for investigating the effects of autism-linked genetic mutations on microglia, del Rosario says.

Researchers could use these chimeras to see how a genetic variant present in one marmoset affects the gene expression and behavior of its microglia compared with those of its wildtype siblings. “You have this side-by-side comparison,” he says.

Measuring two genotypes in the same model animal would be useful, but it could also present a challenge, says Fenna Krienen, assistant professor of neuroscience at Princeton University, who is not involved in del Rosario’s study but who also studied marmoset brains as part of the same team at the Broad Institute. Examining these animals’ genetics would likely require single-cell sequencing to avoid conflating the microglia that come from different siblings.

Autism research also stands to benefit from another marmoset trait: The animal’s brain cells develop in lineages that are much more similar to those seen in people than in mice, according to an unpublished study Krienen presented yesterday.

Marmosets’ brain cells tend to retain the genetic signature of the region where they originally develop, even if they end up migrating to another area, single-nucleus RNA sequencing of cells from 16 brain areas showed. This recapitulates what is seen in people, Krienen says.

And it suggests that a marmoset brain models this aspect of neurodevelopment better than the mouse brain does. “There is a major grade shift in molecular similarity” in marmoset brains compared with mouse brains, she says. Krienen and her colleagues posted the findings on bioRxiv in October.