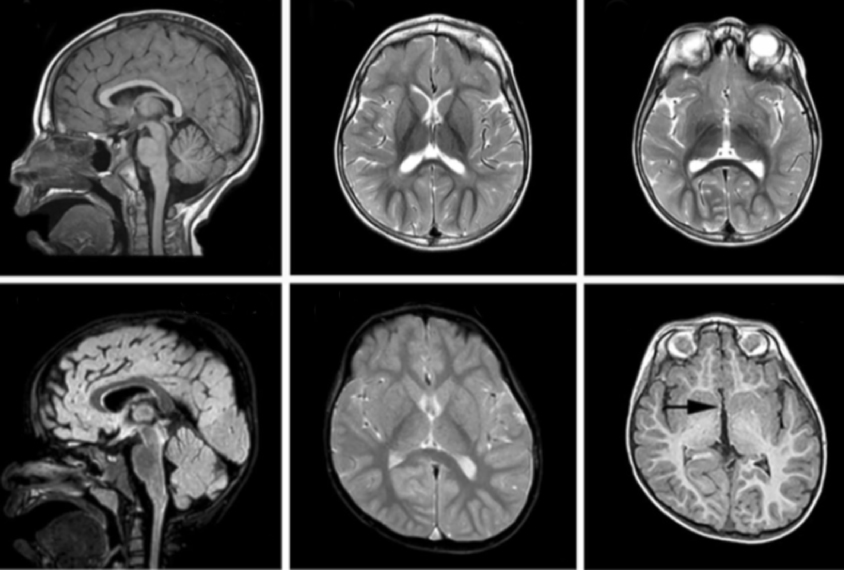 Close inspection: A neuronal tract that connects the brain’s hemispheres is absent or thinner in people with TBR1 mutations (bottom) than in controls (top).

People with mutations in a gene called TBR1 have unusual features in several brain regions, along with autism traits and developmental delay, according to a new study1.

TBR1 encodes a protein that is involved in brain development. It controls the expression of several other autism-linked genes that lay out the structure of the cerebral cortex, the brain’s outer layer and locus of higher cognition.

Studies in mice have suggested that deletion or mutation of TBR1 results in structural abnormalities in the brain2. The layers of the cerebral cortex in these mice may be disorganized, and connections in the amygdala — a structure involved in processing emotions — may be missing.

However, few studies have examined how TBR1 mutations affect people.

Mutations in the gene have been linked to intellectual disability and autism, but more subtle features have not been well documented, says lead investigator Sophie Nambot, a clinician who specializes in medical genetics at the Centre Hospitalier Universitaire Dijon Bourgogne in France.

The new study adds 25 previously unreported individuals to the literature, along with detailed descriptions of their physical, neurological and genetic features. The findings were published in January in the European Journal of Human Genetics.

“It greatly increases the number of individuals and types of mutations in the TBR1 gene that are associated with developmental disorders,” says John Rubenstein, professor of psychiatry at the University of California, San Francisco, who was not involved in the study.

Nambot’s team identified people with TBR1 mutations by contacting national and international health networks, such as GeneMatcher and DECIPHER. They ultimately recruited 25 people, ranging in age from 2 to 29 years, at 22 sites.

Scientists at the centers gathered information about these individuals’ development and autism traits, such as communication difficulties, lack of eye contact and restricted interests.

The researchers also scanned the individuals’ genomes to identify small and large mutations in TBR1. Combining their data with those from previous studies, the team identified 29 different single-nucleotide variants.

Magnetic resonance images from seven of the people revealed previously unidentified structural differences in their brains, Nambot says. These differences are in the cerebral cortex; the anterior commissure, a neuronal tract that connects the two hemispheres of the brain; and the hippocampus, an area involved in learning and memory.

In two of the people, the ridges in the cerebral cortex are unusually broad and thick, and in three people, the hippocampus is malformed.

“The hippocampal problems are very likely to affect learning and memory,” says Robert Hevner, director of neuropathology at the University of California, San Diego. The findings may explain why people with TBR1 mutations have developmental delays, he says. They also support prior studies suggesting that TBR1 affects a type of cell that helps organize the cortex and the hippocampus during fetal development.

Notably, in all seven people, the anterior commissure is thin or absent.

Research in mice demonstrates a similar phenomenon, says Yi-Ping Hsueh, distinguished research fellow in neuroscience at the Institute of Molecular Biology in Taiwan, who was not involved in the new study. In 2014, Hsueh’s team found the anterior commissure to be partially missing in mice lacking one copy of TBR1, resulting in social and cognitive problems2.

Unlike mouse studies, however, the new study does not quantify volume differences in brain structures, which makes it difficult to gauge what should be considered atypical, Hsueh says.

The researchers caution that their sample is small, especially given the range of TBR1 mutations present. Still, they say, their findings may help scientists classify genetic subtypes of autism.