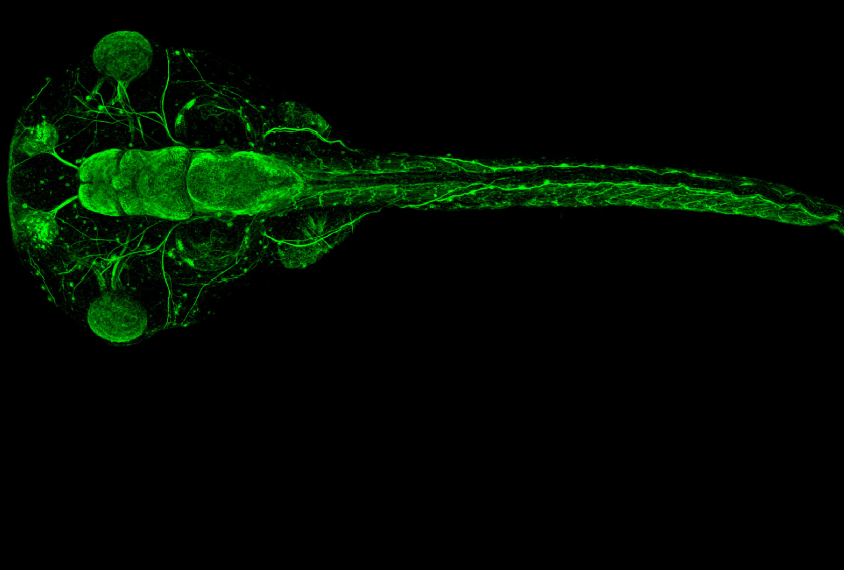 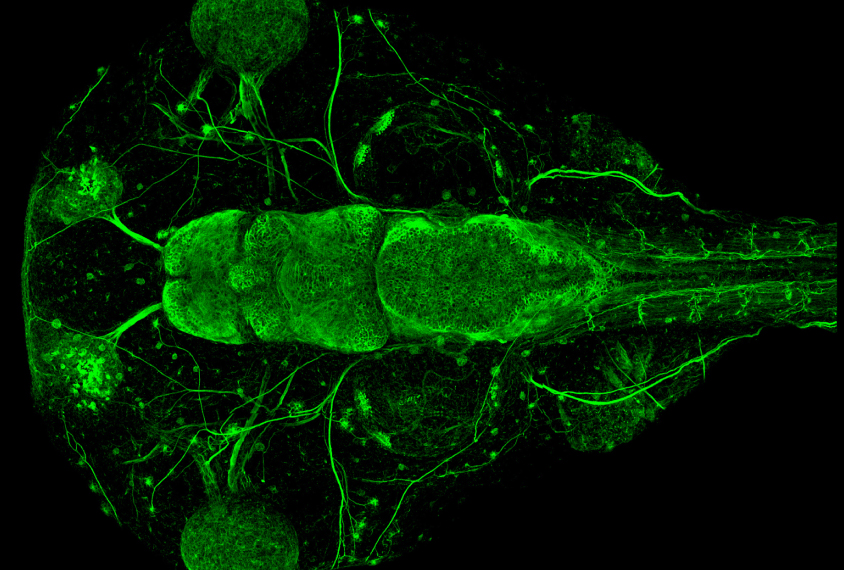 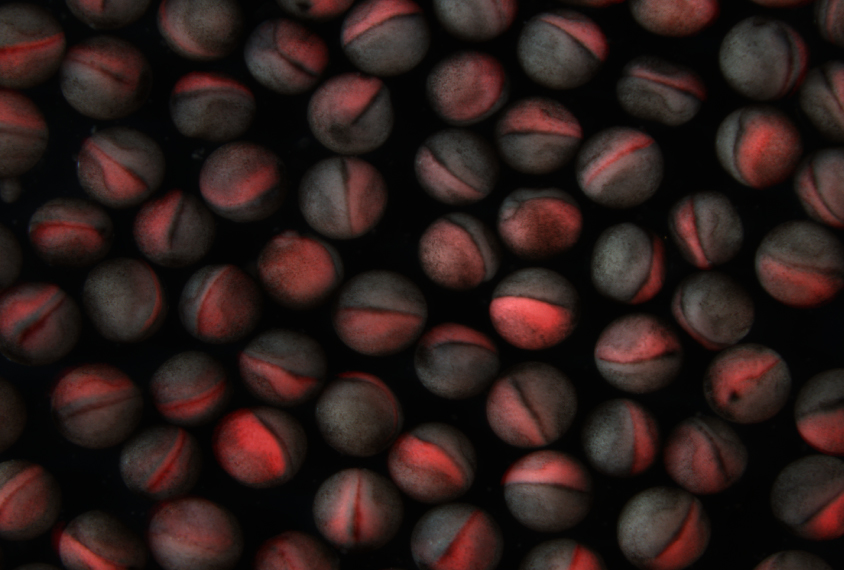 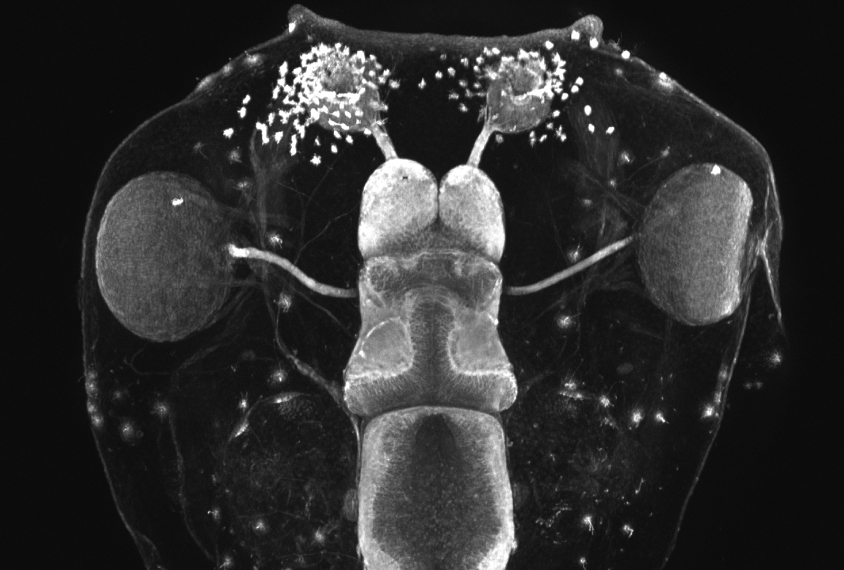 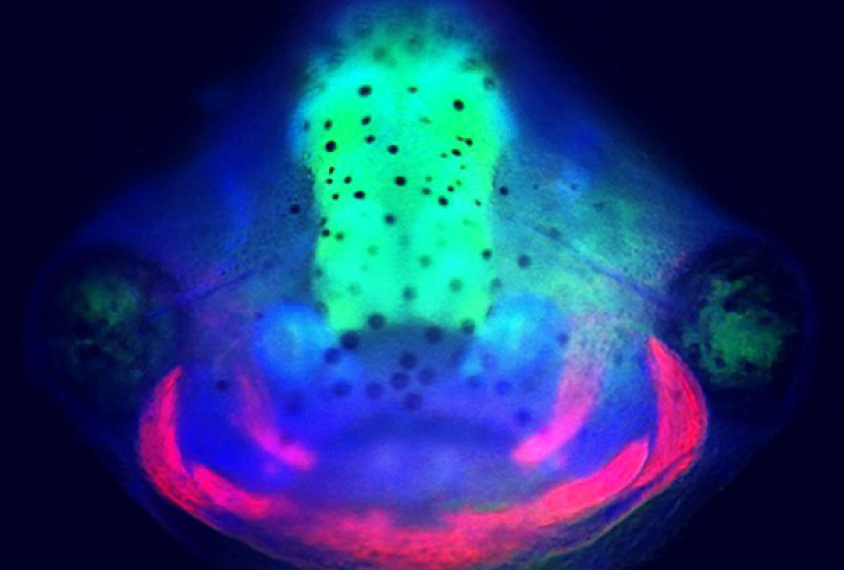 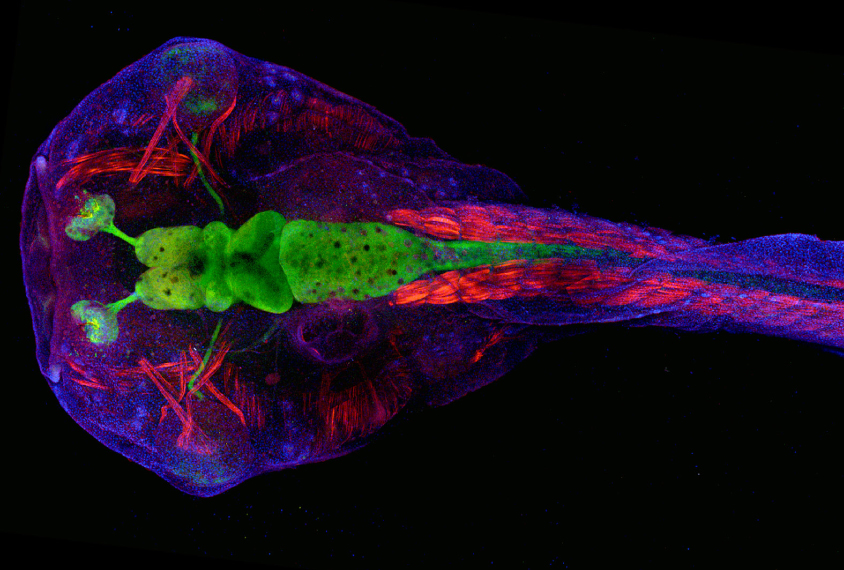 Researchers can use Xenopus tropicalis tadpoles to readily observe stages of brain development that occur in utero in humans and other animals.

Researchers can edit a gene in one half of Xenopus embryos (red) without altering the other (gray).

A tadpole with a mutation in the autism-linked gene DYRK1A in cells on the right side of its body has a smaller right forebrain (upper right) than left forebrain.

Dyes that bind to different cells highlight muscles (red) and nuclear DNA (blue) in a tadpole. Thanks to gene editing, the developing brain glows green.

Mutations in any of 10 autism-linked genes lead to the same overabundance of brain cells that develop into neurons, according to a new study of the mutations in frogs. The sex hormone estrogen lowers this excess, the researchers also found.

Autism is linked to hundreds of genes, but how mutations in this varied pool lead to the same traits remains unknown. The new work sought to pinpoint where the genes’ effects converge.

“Finding shared risk and resilience factors sustains our hope that the field can use the study of individual genes to find treatment targets that work more broadly,” says lead investigator Matthew State, professor of psychiatry and behavioral sciences at the University of California, San Francisco.

State and his colleagues used CRISPR to edit genes in a species of frog called Xenopus tropicalis. Although researchers typically model autism in mice, rats and even monkeys, Xenopus offers advantages from day one: Once its first fertilized cell divides into two, each daughter cell and all of its progeny stay on their respective side. As a result, a daughter cell with an edited gene on the left will grow into a tadpole with that mutation in every cell on the left half of its body — and only the left half. Researchers can also readily observe stages of brain development in the tadpoles that occur in utero in people and other animals.

The convergence the team observed suggests that all 10 of the genes studied play a role in the early development of neurons, in addition to their other functions, says study investigator Helen Willsey, a postdoctoral researcher at the University of California, San Francisco.

Understanding this role could ultimately lead to better treatments for autism, but that is still a long way off: “‘Premature’ would be too generous a word,” State says.

“What we really need right now is a molecular mechanism,” Willsey says. “In order to get therapeutics, we need to know what these genes are doing, what’s in common to them and what are some pathways we could manipulate.”

In a day, a pair of Xenopus frogs can produce thousands of embryos, which develop into tadpoles in about a week.

In each frog embryo, the researchers edited one of 10 genes strongly associated with autism: ADNP, ANK2, ARID1B, CHD2, CHD8, DYRK1A, NRXN1, POGZ, SCN2A or SYNGAP1. All 10 are expressed in the frogs’ cerebrum at stages that line up with prenatal brain development in people, the team found.

Tadpoles with any of the mutations had either unusually large or small cerebrums. And they all had a higher proportion of neural progenitor cells — those that eventually become neurons or other brain cells — to mature neurons than controls did.

“That’s what was so surprising to us,” Willsey says. “Even for genes that are thought to be primarily at the synapse, we still saw changes in brain size and neural progenitor maturation.”

In prenatal human brains, the 10 genes, plus 92 others linked to autism, all encode proteins that interact with proteins in a layer of the cortex where neural differentiation happens, an analysis of a protein-interaction database showed.

The researchers then turned down DYRK1A expression in the tadpoles’ brains using a chemical inhibitor and tested the effects of 133 cancer drugs designed to suppress cell growth; 17 drugs altered the progenitor cell ratio, including 3 that affect the body’s use of estrogen. Adding estrogen to the tadpoles’ water restored the cell imbalance. Mutations that altered the function of estrogen receptors led to the same reductions in cerebrum size as the autism genes. The work was published in Neuron in January.

The findings suggest that estrogen plays an important role in the creation of neurons, Willsey says, and that a better understanding of this role could point to treatment targets. Estrogen itself cannot be given as a treatment because of its effects on development, she says.

Estrogen may partially explain the higher rates of autism observed in boys and men, Willsey says, although at least some of the difference in prevalence may be due to underdiagnosis of the condition in girls and women. Estrogen reduces hyperactivity in zebrafish with mutations in the autism-linked gene CNTNAP2, State’s lab previously showed.

The team’s method could be useful for both screening drugs and studying genes whose functions are less well known, says Sarah Elsea, professor of molecular and human genetics at Baylor College of Medicine in Houston, Texas, who was not involved in the work.

“The process they laid out is quite nice,” she says. “It’s a template to do additional work.”

“One of the greatest possible outcomes that we have from something like this is that there might be one medication that [works in] individuals who have [autism] associated with those 10 genes,” Elsea says. “Maybe there is something that could be identified that would help make their days just a little bit better.”

The approach could also be used identify commonalities across genes related to psychiatric conditions such as schizophrenia and bipolar disorder, says Kristen Brennand, a faculty member in the psychiatry department at Yale University, who was not involved in the work.

“It’s more evidence [that] there needs to be a systematic way of manipulating” genes linked to these conditions, Brennand says.

The brain changes observed in the frogs may not relate to autism, because the 10 genes studied are known to be important for neuron and synapse development generally, says David Cutler, professor of human genetics at Emory University in Atlanta, Georgia, who was not involved in the work.

Still, the method could eventually point to a system that will translate to people, he says.