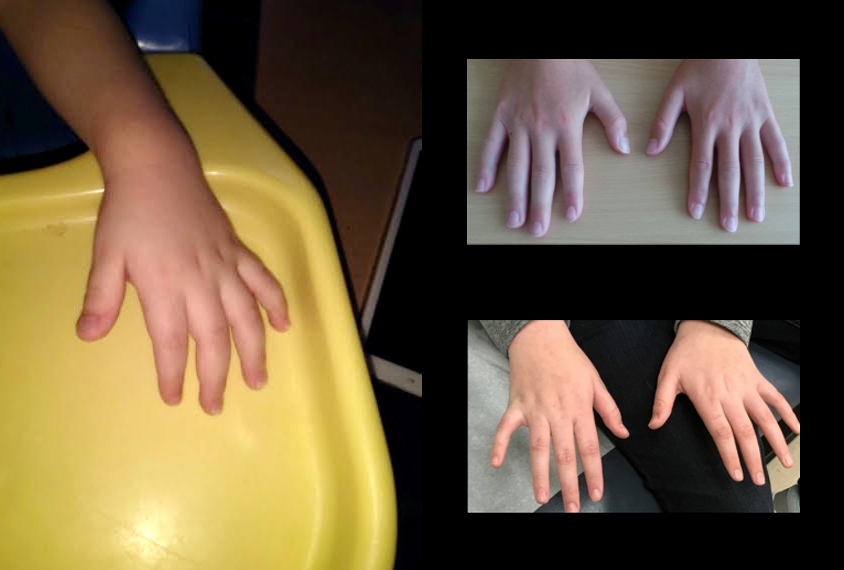 Fine point: Many children with mutations in a gene called PHF21A have tapered fingers.

People who have mutations in a gene called PHF21A tend to have a constellation of traits and conditions, including autism, according to a new study1.

PHF21A encodes a protein that is part of a massive complex that binds to DNA. The gene’s exact function is unknown, but studies suggest it prevents neuron-specific genes from being expressed in other types of cells.

It is one of several genes implicated in a rare condition called Potocki-Shaffer syndrome2. A 2012 study linked mutations in the gene to two characteristics of the syndrome: intellectual disability and unusual facial features, such as a narrow nose and downturned mouth3.

But PHF21A is also emerging as a strong autism gene. Since 2014, mutations in the gene have turned up in at least three people with autism or traits of the condition4,5,6,7.

The new study details the clinical characteristics of seven children with PHF21A mutations. All of the children have intellectual disability, and three have autism.

The findings also add seizures, low muscle tone and unusual-looking hands and feet to the list of traits tied to mutations in the gene. “They have done a nice job of showing the spectrum of features seen in these children,” says Sarah Elsea, professor of molecular and human genetics at Baylor College of Medicine in Houston, Texas, who was not involved in the study.

Kim and his colleagues found seven children in the United States and France who carry mutations thought to impair the gene’s function. In at least six of the children, the mutations arose spontaneously, meaning that the parents do not carry the mutations; only one of the seventh child’s parents was available for testing.

All seven have intellectual disability, developmental delay, language delay and motor problems, according to their medical records. Four have seizures, and three of the six children tested for autism have the condition.

All of the children have other notable physical features too, such as a broad nasal bridge, tapered fingers or shortened toes, and four are obese. The findings appeared in October in Molecular Autism.

The researchers analyzed the gene’s expression levels in a variety of human tissue samples. They found that the gene is most highly expressed in the brain and in muscles.

This finding jibes with the idea that mutations in the gene contribute to problems with brain development and motion.

Researchers should next test whether the mutations impair the protein’s function, says Gholson Lyon, a principal investigator at the Institute for Basic Research in Developmental Disabilities in New York City, who was not involved in the study.

Kim and his colleagues plan to study blood cells from the children to try to better understand how the mutations contribute to autism.