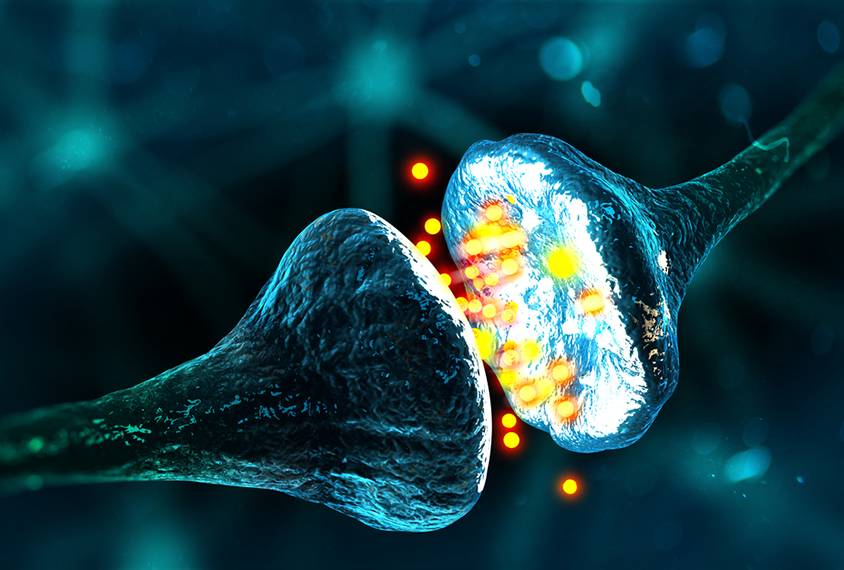 Missing bricks: SHANK3 encodes a scaffolding protein that organizes other proteins at the junction between neurons.

People with mutations in SHANK3 have intellectual disability and other features of Phelan-McDermid syndrome, the condition most closely associated with this gene.

However, these individuals tend to have milder traits than do those missing a chunk of DNA that includes the gene, according to a new study1.

Phelan-McDermid syndrome is characterized by severe intellectual disability, absent or delayed speech, motor problems and often autism. Most people with the syndrome lack a stretch of DNA at the tip of chromosome 22 called 22q13.3. The deletion can vary in size but typically includes SHANK3 and 25 to 30 other genes. The larger the deletion, the more severe the features.

SHANK3 mutations account for an estimated 1 percent of autism. It is unclear why only some people with the mutations have autism.

A small proportion of people with Phelan-McDermid syndrome have mutations in SHANK3, but a thorough assessment of clinical features in this group has been lacking.

“It’s clear that other genes in the region contribute to the phenotype, but, at the same time, losing only SHANK3 is enough to cause a pretty significant phenotype,” says lead researcher Alexander Kolevzon, professor of psychiatry and pediatrics at the Icahn School of Medicine at Mount Sinai in New York.

The test used to flag Phelan-McDermid syndrome only detects 22q13.3 deletions. The new results suggest that people with features of Phelan-McDermid syndrome who do not have a deletion should be tested for SHANK3 mutations, says Luigi Boccuto, a clinical geneticist at Greenwood Genetic Center in South Carolina. “This study has a very important message for physicians.”

Kolevzon and his colleagues recruited 17 people with SHANK3 mutations and a diagnosis of Phelan-McDermid syndrome. The participants ranged in age from 3 to 42 years.

All of the individuals have intellectual disability and 11 have autism, the researchers found; 5 have seizures. Most of them achieved early motor milestones on time but have low muscle tone and gait abnormalities.

Five of the individuals speak no words, three speak a few words and one uses mostly single words. The remaining eight people speak in sentences, although their language skills are not on par with those of their typical peers. Still, the group has better language abilities overall than people with deletions in the 22q13.3 region.

Of the 17, 11 (65 percent) showed regression — defined as a loss of language, motor or behavioral skills previously acquired — at some point between early childhood and adolescence. The rate of regression in people with deletions is lower, at about 40 percent.

“People with larger deletions may not show regression because their skills are compromised in the beginning,” Boccuto says. The findings appeared 27 April in Molecular Autism.

The researchers also analyzed clinical records of 45 people with Phelan-McDermid syndrome who have SHANK3 mutations, and found similar results. All of the individuals have intellectual disability and 26 of the 34 evaluated for autism meet criteria for the condition.

The SHANK3 protein organizes other proteins at synapses, the junctions between neurons. Mutations in the gene may result in a defective protein; deletion of one copy of the gene would halve the protein’s level. A new mouse model of Phelan-McDermid syndrome represents potential consequences of the deletion2. The dataset in the new study is too small for researchers to predict the effects of each mutation.

“For this study, we grouped all mutations together. But where the mutation occurs in the gene could also have relevance,” Kolevzon says.

The team has so far recruited more than 100 individuals with Phelan-McDermid syndrome and SHANK3 mutations for a larger study designed to link specific mutations with syndrome features.