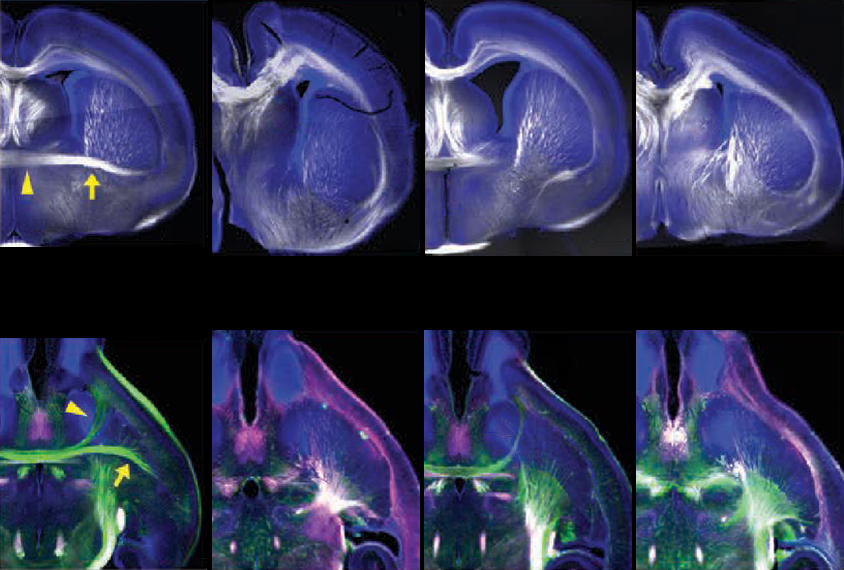 Autistic people and mice with similar mutations in the TBR1 gene share many of the same brain structural changes, according to a new study. The new model mice could help researchers better understand how the mutations contribute to autism traits.

“It’s pretty exciting to see what we call ‘construct validity,’” says lead researcher Brian O’Roak, associate professor of molecular and medical genetics at Oregon Health and Science University in Portland. “We are seeing the same things in mouse models and in humans.”

TBR1 encodes a protein that orchestrates brain development by controlling the expression of other autism-linked genes. About 30 different mutations appear in the gene in people, some of whom have intellectual disability and autism.

Because different mutations, even in the same gene, can give rise to distinct traits, a drug that offsets the effects of one mutation may be ineffective for another — highlighting the need for mutation-specific models such as the new animals, says Robert Hevner, director of neuropathology at the University of California, San Diego, who was not involved in the study.

A previous mouse model also featured a TBR1 mutation but was created by way of Cre recombinase, an enzyme that can modify a gene only when it is flanked by foreign DNA sequences. That model may not clearly show the effects of its TBR1 mutation because the expression of foreign DNA might also contribute to developmental abnormalities.

Homozygous mice with two copies of the frameshift mutation had no TBR1 protein, and the protein’s levels fell by one-quarter in heterozygous animals that, like people with TBR1 mutations, carry only one disrupted copy — a finding that suggests the mutated protein gets degraded. Heterozygous missense mice contained double the usual amount of TBR1 protein, whereas levels increased fivefold in homozygotes, supporting previous findings in the Cre-generated strain. TBR1 is known to downregulate its own expression, suggesting that the missense mutations prevent autoregulation.

Despite the imbalances, the two types of heterozygous mice displayed similar brain structure changes, including missing sections of the anterior commissure, a white-matter tract that connects the two hemispheres. The same structure is absent in mice lacking one copy of TBR1, leading to social and cognitive problems, and appears to be thin or missing in MRI scans of autistic people with TBR1 variants, according to previous results.

The findings were published in August in the Journal of Neuroscience.

The structural changes seem to align with the fact that TBR1 regulates the expression of genes that determine the architecture of the cerebral cortex and the organization of the brain’s outer layers. Both strains of homozygous mice displayed disordered layering, although the heterozygous ones did not, suggesting that one functional copy of TBR1 is sufficient during early cortical development.

What’s more, the two homozygous mutants differed in their patterns of cortical disorganization. Those with the frameshift mutation resembled mice that lack TBR1 entirely: Their cortical layers were inverted, with what is typically the deepest layer at the brain’s surface. By contrast, the missense mice showed a more complicated arrangement, suggesting that TBR1 still functions, albeit differently.

It’s another example of how “mutations in a single autism causative gene may have different effects on molecular function,” leading to different brain phenotypes, says Yi-Ping Hsueh, distinguished research fellow in neuroscience at the Institute of Molecular Biology in Taiwan, who was not involved in the study.

The next step, the researchers say, is to test the animals’ social and motor skills and other behaviors.

“It would be interesting to compare not just social deficits, but also anxiety and aggression, which are seen in individuals with TBR1 mutations,” says study investigator Marissa Co, a postdoctoral researcher in O’Roak’s lab.