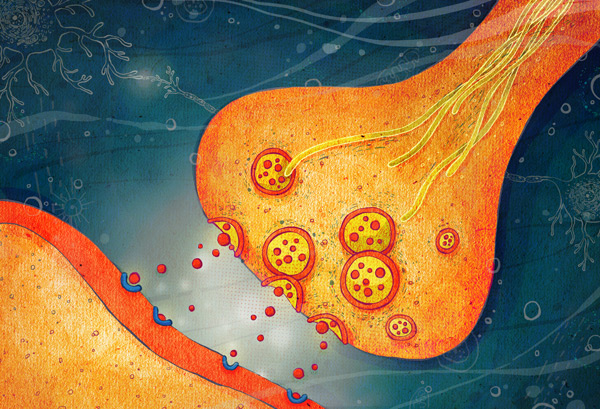 Mice that begin expressing a mutant version of a protein called neurexin at 2 weeks of age develop autism-like behaviors that researchers can erase weeks or months later. The report, published 24 July in Cell Reports, suggests that it may be possible to treat autism symptoms even in adulthood1.

In particular, the animals’ social behavior, such as self-grooming and interaction with other mice, returned to normal.

“I think this is good news for the autism field because it shows that reversion even in old animals can be possible,” says lead researcher Francisco G. Scholl, professor of medical physiology and biophysics at the University of Seville in Spain.

The neurexin family of proteins helps neurons send signals across a synapse — the point at which two neurons connect. From their position on one side of the synapse, they bind to another family of proteins called neuroligins on the other side to facilitate the release of chemical messengers2. Mutations in neurexins and other synaptic proteins have been linked to autism.

Several studies over the past few years have successfully reversed symptoms in mouse models of autism and related conditions such as Rett syndrome, tuberous sclerosis and fragile X syndrome. Last year, for example, researchers administered gene therapy to correct behavioral and other deficits in adult mice modeling Rett syndrome, and another study used a drug for sleeping sickness  to reverse social and other deficits in a mouse model of severe autism.

“It does give people hope that some aspects of autism can be improved in adulthood,” says Gavin Rumbaugh, associate professor of neuroscience at the Scripps Research Institute in Jupiter, Florida, who was not involved in the study.

Research so far suggests that social deficits may be especially amenable to reversal in adulthood. Rumbaugh says this may be because the mutations associated with social behavior disrupt the functioning of individual neurons, rather than affecting overall brain structure or circuits.

In the new study, Scholl and his colleagues engineered mice that develop normally for the first two weeks of life and then express a mutant fragment of one type of neurexin — called neurexin1β — in certain neurons of the forebrain. This mutant fragment blocks the normal protein from binding to its partner neuroligin, and prevents the movement of chemical messengers between neurons.

Weeks later, the mice develop behavioral abnormalities: Compared with controls, they groom themselves compulsively, display repetitive behaviors, and show less interest in other mice and in social odors such as urine, and more in nonsocial odors such as vanilla and orange blossoms.

Neurons in the somatosensory cortex — a region with an especially high amount of mutant neurexin — send fewer messages than normal.

Neurexin is expressed in the mouse throughout development and into adulthood. Scholl’s team chose to block its function at 2 weeks of age to show that this is enough to trigger autism-like behaviors.

They turned off the expression of the mutant protein at 2 to 4 months of age in one group of mice and at 9 to 11 months in another. Within two weeks of the treatment, the mice show no signs of their previous symptoms and behave like controls do. 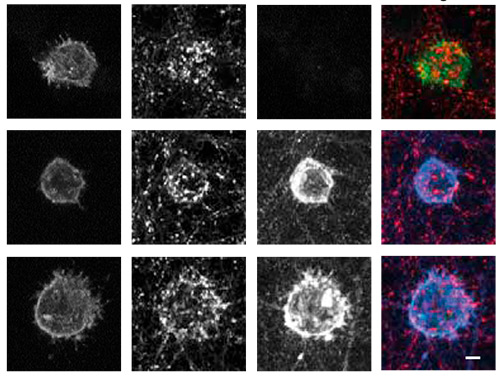 Gone awry: Neurons with a mutant neurexin form healthy synapses, but information doesn’t travel across them as it should.

“This clearly shows that neurexin dysfunction in postnatal neurons is sufficient to trigger autism symptoms and that correct neurexin function is needed throughout life,” Scholl says.

It would be interesting to know whether the same reversal would be possible if the mutant protein were introduced earlier — for example, around the first week, when brain development is at its peak, notes Catherine Fernandes, lecturer in social genetic and developmental psychiatry at Kings College London, who was not involved in the study. “[Scholl’s team is] almost implying that if there was a prenatal effect, it would have been reversed, but of course they haven’t done that,” she says.

Another question left unaddressed is whether turning the mutant protein off in adulthood also restores normal signaling, says Lucas Pozzo-Miller, professor of neurobiology at the University of Alabama at Birmingham, who was not involved in the study. “They didn’t go back and check to see if the synapses got better after they stopped the production of mutant proteins, like the behaviors did,” he says.

Perhaps a bigger issue is that the link between the behavioral symptoms in mice and those of people with autism is unclear. Many genes affect social behavior, but not all those genes are necessarily involved in autism.

The same is true at the circuit level, notes Rumbaugh. “We don’t understand how similar the circuitry and the function that drives behavior in the mouse brain is to that in the human brain,” he says. “Can we reasonably say that those are the circuits that are disrupted in an autistic child’s brain?”