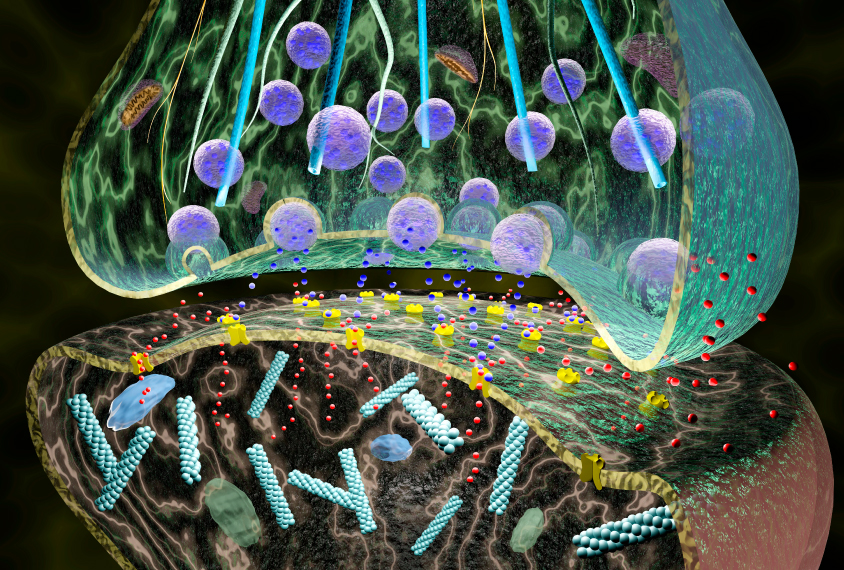 Signal failure: Autistic people and mice with mutations in CNTNAP2 show disruptions in metabolites, genes and other molecules linked with synaptic vesicles.

Mutations affecting the autism-linked gene CNTNAP2 disrupt mitochondria, synaptic signaling and the growth of neuronal projections in the brain, a new study suggests.

The findings — based on a ‘multi-omics’ analysis of CNTNAP2 — may lead to novel strategies for the early diagnosis and treatment of autism, says lead investigator Min-Sik Kim, associate professor of new biology at the Daegu Gyeongbuk Institute of Science and Technology in South Korea.

The new work connects mutations in the gene to a wide range of effects in the brain, including — somewhat surprisingly, says Susanne Schmid, professor of anatomy and cell biology at Western University in London, Ontario, Canada, who was not involved in this study — altered expression of other genes in mitochondria in both mice and people.

Prior work found that mitochondrial problems are common in autism, Schmid says, but “to my knowledge, CNTNAP2 has not been connected to mitochondrial function in the past.”

Kim and his colleagues analyzed the proteome and metabolome of CNTNAP2-knockout mice. They focused on the medial prefrontal cortex, a brain area associated with social behavior and cognition, and in which the knockout mice have a dearth of neurons.

Autistic people and CNTNAP2 mice both showed disruptions in metabolites, genes and other molecules linked with the movements of synaptic vesicles, which carry the neurotransmitters that neurons use to communicate. Both also had lowered expression of genes important for the growth of axons, which conduct electrical signals between brain cells. Many other autism-linked genes are related to axon growth, previous work has shown. The findings appeared in October in Molecular Psychiatry.

Kim and his team also discovered that 48 genes — including such autism-linked genes as GABRB3, TRIM32, DPP3 and VAMP2 — are dysregulated in both mice and autistic people with mutations in CNTNAP2. Understanding how those genes contribute to CNTNAP2’s full range of effects may bring researchers closer “ultimately to intervene with treatment,” Schmid says.

The comprehensive approach Kim and his colleagues took could be used to identify general brain processes that depend on the proper function of CNTNAP2, “or any other gene,” Schmid says.

When it comes to carrying out such labor-intensive analyses on other autism-linked genes, “we may have to think about a consortium-style approach,” Kim says.

Nevertheless, the shared omics data across knockout mice, human brain tissue and an organoid model is exciting, says Katrina Choe, assistant professor of psychology, neuroscience and behavior at McMaster University in Hamilton, Canada, who did not take part in this study. “These findings again validate the use of in vivo mouse and in vitro organoid models for furthering our understanding of the neurobiology underlying autism spectrum disorder.”

Future research can investigate what effects autism-linked CNTNAP2 mutations might have on subcortical regions of the brain, Choe says. These areas play significant roles in cognitive, emotional and social behavior.

It might also consider what effects disrupting CNTNAP2 has at different points of development, Schmid adds, because answering that question is relevant for potential treatments.