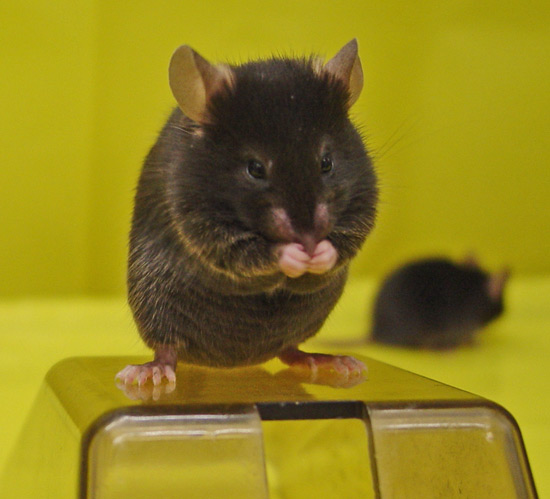 A new mouse model of Angelman syndrome that knocks out a large stretch of a key chromosome is clarifying some of the molecular mechanisms underlying the more severe forms of the disorder.

Angelman syndrome, which is characterized by stunted language and arrested cognitive development, is caused by a maternal deletion in the UBE3A gene. The gene is located in the chromosomal region 15q11-13, implicated in both Angelman and some cases of autism.

Previous mouse models have knocked out UBE3A, but in engineering the new model, researchers also inactivated the neighboring GABRB3 gene and deleted the ATP10A gene.

Mice with the larger deletion have more seizures and more severe motor, learning and memory problems than those in which only UBE3A is inactivated, the team reported in PLoS One in September1.

“The new mouse allows us to dissect the contributions of GABRB3 and ATP10A to the more severe phenotype,” says Ben Philpot, associate professor of cell and molecular physiology at the University of North Carolina, Chapel Hill, who was not involved in the research.

Deficits in the mice mirror effects in people known to have large chromosomal deletions in the 15q11-13 region. Many of these people have severe forms of epilepsy and are less likely than those without the deletions to develop language beyond a few words, “likely due to the added genes deleted,” says Philpot.

The model could also help researchers determine which copies of these genes are turned off or ‘silenced,’ a process known as imprinting.

“The new mouse allows us to distinguish expression from paternal and maternal copies of genes using common techniques,” says Arthur Beaudet, professor and chair of the department of molecular and human genetics at Baylor College of Medicine in Houston.

The study confirms previous reports that only the maternal version of UBE3A is expressed in the brain2. However, the researchers found that both maternal and paternal GABRB3 and ATP10A code for protein throughout the mouse brain.

Earlier studies of GABRB3 and ATP10A had reported conflicting results, with some finding that only maternal ATP10A is expressed in human brain tissue, and others finding that both maternal and paternal genes are expressed3. Studies with mice have been similarly inconclusive4,5.

“The imprinting data is not clear-cut,” says lead investigator Yong-hui Jiang, assistant professor of neurobiology at Duke University. “We can’t rule out the possibility, but our studies with mice have not confirmed it, either.”

Early mouse models of Angelman have helped characterize some of the mechanisms that underlie the symptoms of the disorder, illuminating how UBE3A helps regulate the development of synaptic circuits — the networks of neuronal connections designed to process information.

But it was clear early on that a larger mutation in the 15q11-13 region has more severe effects. Given their proximity to UBE3A, GABRB3 and, to a lesser extent, ATP10A, were likely culprits.

GABRB3 encodes a protein that helps build GABA receptors, which control inhibitory signals in the brain. Researchers have long known that GABA signaling plays a role in epilepsy.

More than 90 percent of children with Angelman syndrome have epilepsy, and children with the larger deletion have more severe forms of the condition.

Last year, a group of researchers reported finding a rare variant of GABRB3 in families with autism. They calculated that people with the variant are six times more likely to develop autism than are controls.

The researchers also discovered that the variant is more likely to be inherited from the maternal than the paternal chromosome.

By contrast, ATP10A’s precise role in Angelman syndrome remains unknown. Jiang plans to create mice in which ATP10A alone is knocked out to explore the gene’s role.

The new mouse is not a perfect match for Angelman in humans. Though the gene deletions in people lead to a loss of language, the young mice in the new study actually vocalize more.

Rats with gene deletions in the same region also seem to chirp more — a possible correlate for human laughter, according to some researchers6. This makes sense, given the generally sunny temperament of people with Angelman syndrome.

But looking for exact parallels between rodent and human behavior is a dicey business, Philpot notes. “People sometimes want mouse behavior to recapitulate exactly what you see in humans, but just because we’re not seeing that here doesn’t mean the mouse isn’t a valid model,” he says. “We can’t expect mice to behave the same way as humans.”