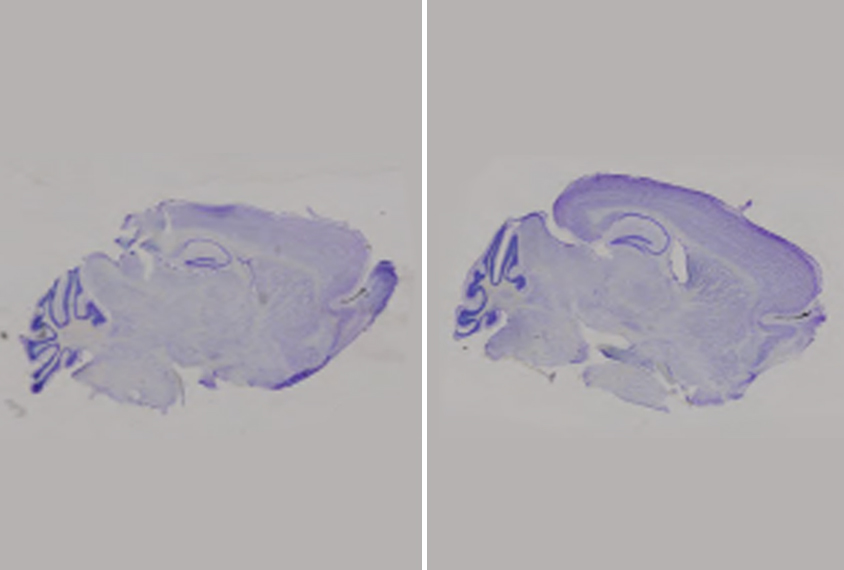 Blocking one form of an enzyme implicated in autism eases unusual behaviors and seizures in mice missing a top autism gene, according to a new study1. The results point to a possible new target for autism therapies.

The mice lack a gene called PTEN. Like many people who have a mutation in PTEN, the mice have enlarged brains, seizures and behaviors associated with autism. They also have hyperactive mTOR, a key enzyme in a pathway of the same name. The mTOR pathway is best known for its role in cancer; it governs cell growth and is hyperactive in several conditions related to autism.

The enzyme is part of two complexes called mTORC1 and mTORC2, each of which has a distinct function. Both complexes are known to be hyperactive in people with a PTEN mutation and in mice missing the gene.

However, the new study suggests that mTORC2 is solely responsible for the mice’s seizures and unusual behaviors.

The findings come as a surprise because many other studies pointed to mTORC1 as the main culprit, says lead investigator Mauro Costa-Mattioli, chair of neuroscience at Baylor College of Medicine in Houston, Texas.

In those studies, researchers used a drug called rapamycin to treat the mice’s seizures and abnormal behaviors2. Scientists assumed rapamycin worked via its effect on mTORC1, even though studies have long shown that prolonged exposure to the drug also blocks mTORC23.

The new study suggests that drugs that block mTORC2 might treat behaviors in mouse models of autism.

“This gives us a very surprising and unexpected finding, and does so in a very rigorous and in-depth manner,” says Alcino Silva, director of the Integrative Center for Learning and Memory at the University of California, Los Angeles, who was not involved in the study. “It’s exciting because it provides new avenues for therapy.”

Costa-Mattioli’s team created mice that lack PTEN only in neurons that mediate excitatory signaling in the brain; these neurons are implicated in autism.

Both mTOR complexes are hyperactive in these mice, and the neurons are hyperexcitable. The mice have enlarged brains, seizures and memory problems, and they die prematurely. Unlike controls, they do not prefer to spend time with an unfamiliar mouse over a familiar one. And their behavior is inflexible: When placed in a T-shaped maze, they repeatedly explore only one arm of the maze.

The researchers then eliminated one of the two complexes from the mutant mice. Those missing mTORC1 do not have enlarged brains, but they have seizures, behavioral problems and a shortened lifespan. By contrast, the mutant mice missing mTORC2 have enlarged brains and live as long as controls do, but they do not develop seizures or abnormal behaviors.

The findings serve as an important reminder that the mTOR pathway has distinct branches, says Peter Tsai, assistant professor of neurology at the University of Texas Southwestern in Dallas, who was not involved in the study. “The [two complexes] have different functions.”

Costa-Mattioli’s team also explored the therapeutic potential of tamping down mTORC2 in the mutant mice. They injected DNA fragments called antisense oligonucleotides into the brains of 4-week-old mice. These fragments, which block mTORC2, quell the animals’ seizures and alleviate their behavior problems, the team found.

The findings suggest that scientists should tease apart the contributions of each complex to other conditions related to autism, such as tuberous sclerosis, says Eric Klann, director of the Center for Neural Science at New York University, who was not involved in the study: “Could you target [mTORC2] in that disorder also, or is this specific to PTEN?”

Costa-Mattioli and his team are blocking the complexes in other mouse models of autism. They are also trying to understand how the mTORC2 complex contributes to autism.