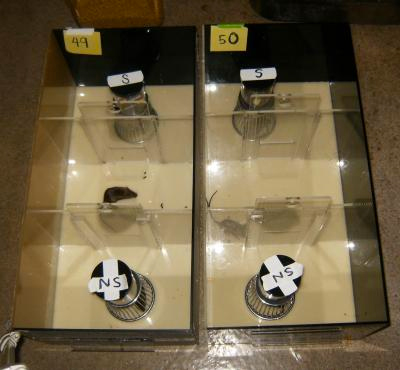 A protein involved in the cascade of interactions at the junctions between neurons points to a potential therapy for fragile X syndrome, according to unpublished data presented at the 2011 Society for Neuroscience annual meeting in Washington, D.C.

The protein, striatal-enriched tyrosine phosphatase, or STEP, helps maintain the balance of excitation and inhibition in neurons. The protein is found at abnormally high levels in people with fragile X syndrome, a hereditary disorder that causes intellectual disability and autism1.

A mouse study published earlier this year suggests that in the brain, STEP also binds to the fragile X mental retardation protein, FMRP, which is missing in individuals with the disorder2.

In a new study, presented Sunday in a poster at the conference, researchers showed that lowering the levels of STEP improves social behavior in a mouse model of fragile X syndrome.

“I absolutely think it’s a promising approach,” says Susan Rivera, professor of psychologyat the Center for Mind and Brain at the University of California, Davis, who was not involved in the work.

The fragile X research community is targeting many different pathways linked to FMRP in search of a therapy, but this diversity of approaches is necessary, she says. “What works for one patient may not work for another.”

In their study, the researchers cross-bred fragile X mice with mice lacking STEP. The offspring lack FMRP and have either half the normal levels of STEP or none at all.

To test social behavior, the researchers placed the mice in a cage containing three chambers. A mouse can stay in the empty center chamber, go into a room containing an inverted wire cup, or into a third with another mouse underneath a wire cup.

Fragile X mice frequently enter the room containing another mouse, but they don’t stay very long each time. “What they were doing was going in and out, in and out, but not stopping to maintain the interaction,” says Susan Goebel-Goody, a postdoctoral fellow in the laboratory of Paul Lombroso at Yale University, who presented the work.

Goebel-Goody says this behavior is similar to the way a person with fragile X syndrome will often shake hands and say ‘Hello’ to another person repeatedly.

But fragile X mice that lack STEP behave similarly to control mice: They stay in the third chamber, sniff around and get to know the other mouse, a typical pattern of mouse social behavior. “It suggests that STEP is playing a role somehow in maintaining the social interaction,” Goebel-Goody says.

Fragile X mice with half of the normal level of STEP also behave similarly to controls. This raises the hope that drugs that lower STEP levels without eliminating it entirely might still improve social deficits in people with the syndrome.

STEP may also be important in other neurodevelopmental and mental disorders. In other unpublished work presented at the conference, Lombroso’s team found that people with schizophrenia have elevated levels of STEP in a brain region called the cingulate cortex.

The researchers also found that several antipsychotic drugs used to treat schizophrenia inactivate STEP. However, these drugs exert their effects indirectly, says Nikisha Carty, another postdoctoral fellow in the Lombroso lab. The researchers are searching for drugs that could block STEP directly.